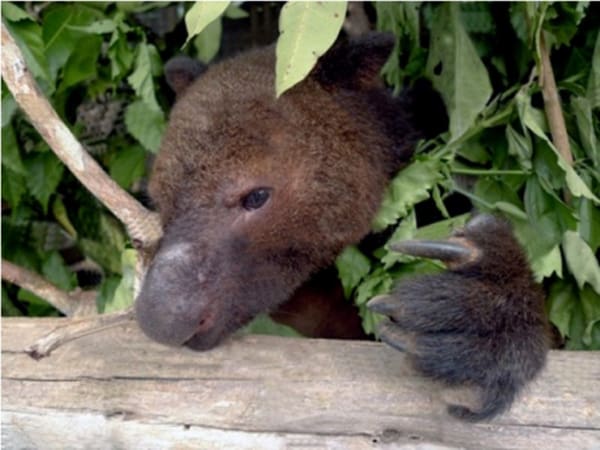 The tenkile, or the Scott’s tree kangaroo (Dendrolagus scottae) could be a cross between a koala bear and a puppy. With it’s fuzzy dark fur, long tail and snout, and tiny ears, it’s difficult to imagine a more adorable animal. It’s also difficult to imagine that the tenkile is one of the most endangered species on Earth: only an estimated 300 remain.

According to the Tenkile Conservation Alliance (TCA), the tenkile’s trouble stems from a sharp increase of human settlements in the Torricelli mountain range. Once relatively isolated, the tenkile now struggles to avoid hunters and towns while still having sufficient range to live in. The TCA also suggests the cultural shift in Papua New Guinea’s Torricelli natives could contribute to the animal’s decline: an influx of Catholic missionaries lead to a mass conversion of many of the natives. While the tenkile’s habitat was traditionally off limits for hunting for fear of spirits, the natives now hunt there regularly; instead of bows and arrows, they use guns.

Euan Ritchie, an ecology lecturer at Deakin University in Queensland, has united with the Tenkile Conservation Alliance to begin a camera survey in Papua New Guinea’s (PNG) Torricelli Mountains, where the tenkile and other critically endangered animals persist. As the first comprehensive wildlife camera trap study in the Torricelli range, the joint study endeavors to estimate population numbers and habitat of the tenkile, as well as other critically endangered species to discover their population numbers and habits.

Euan Ritchie spoke to Mongabay.com about the tenkile’s decline, and his new project to conserve the species.

Mongabay: Why aren’t tenkile tree kangaroos on the public’s radar for species in need of conservation?

Euan Ritchie: Despite PNG having an incredibly diverse fauna by world standards, it is very poorly studied, due to the remote and difficult to access areas these species live in. Very few people conduct work in PNG and hence the region and its fauna receive much less media attention as compared to elsewhere. But there is no doubt that tenkiles and many other species of the region deserve a lot more attention, as many are critically endangered and much closer to extinction than are say pandas or koalas for example.

Mongabay: Since the general public doesn’t know a lot about them, what is happening to the tenkile tree kangaroos?

Euan Ritchie: What we do know is that there numbers are likely to be around 300 and they have a highly restricted distribution (~150sqkm). They have increased from probably as few as 100 animals left in the wild, mostly as a result of the efforts of the Tenkile Conservation Alliance www.tenkile.com We know little else about their biology.

Mongabay: Why is it important to preserve the tree kangaroos? Why has it proven so difficult?

Euan Ritchie: It is important to conserve all species. But, in terms of tree kangaroos they are important to the local people culturally and spiritually, and feature in their stories and songs. When locals were shown camera images of the tenkile from the wild, they wept, as there are so few left and they mean so much to the local people.

Being medium-sized herbivores tree kangaroos are also likely to play a crucial role in the structure and composition of the forests they occur in. It is difficult to conserve these species, as with the improvement of health and education in recent decades, the population of the region has boomed, meaning hunting poses a real threat, and this is compounded by the threats from logging and mining. However, the transition from hunting wild animals (including tree kangaroos) for protein to eating caged rabbits, an initiative put in place by TCA (see their website), has meant numbers of some mammals and birds have grown significantly.

Mongabay: How will your camera traps help the kangaroos, and other Papua New Guinean wildlife? Do you think it will change how the public views (or doesn’t view at all) the tenkile?

Euan Ritchie: Cameras will allow us to collect data that is next to impossible to get any other way. Cameras will be surveying animals for weeks at a time and 24hrs a day. We’ll get data on where animals are found (including how high up the mountain—which is relevant to predicting the impacts of climate change), in what numbers, in what habitats and indeed, we’re probably likely to see new species and/or ones that are cryptic and not detected by other methods. The more we can show people, both locally in PNG and globally, what species reside in these forests, the more a connection and value of the wildlife will be established, which will lead to more efforts to want to conserve them. The results from camera trapping will establish a greater knowledge of the biodiversity, which in turn will create a greater awareness of the area—hopefully meaning PNG and its’ rainforest will reach a much bigger audience

Mongabay: What other animals are you expecting to see during this project?

Mongabay: How are the Torricellis—the locals of Papua New Guinea—helping the conservation of the tenkile and other local wildlife?

Euan Ritchie: Presently the Tenkile Conservation Alliance (TCA) has 50 villages within its’ program—that’s about 10,000 people. Through our education and community development programs people now have a greater respect for their environment and the special species it holds. TCA has delivered 320 water tanks to the villages over the years. These tanks have improved the life of all who use them and act as a constant reminder of their endangered species. People now consider the tenkile their gold medal and they want to keep it shining—that is they vow never to hunt it again.

Mongabay: What can people do, even those who live far away, to help the tenkile?

Euan Ritchie: Please donate at Pozible and spread the word about this project and TCA far and wide.