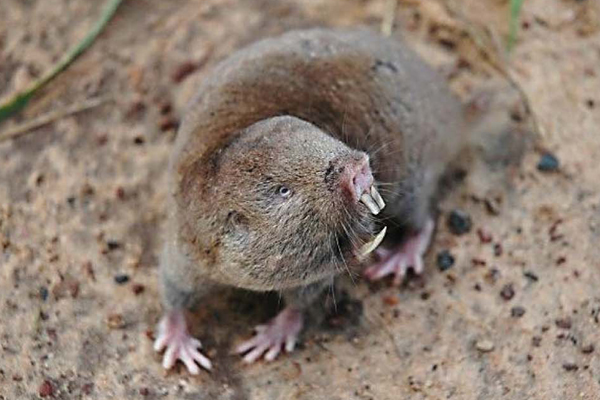 Although the term “giant mole rat” may not immediately inspire love, the mole rats of Africa are a fascinating bunch. They spend practically their entire lives underground building elaborate tunnel systems and feeding on plant stems. This underground lifestyle has led them to evolve small ears, tiny eyes, forward-pointing teeth for digging, and nostrils they can shut at will while digging. Some species are quite social, such as the most famous, the naked mole rat (Heterocephalus glaber), while others live largely solitary lives. If that’s not enough, the family of mole rats, dubbed Blesmols, may even help us find a cure for cancer.

“They are long-lived rodents (Fukomys more than 20 years [and] the naked mole-rat more than 30 years) and have become a focus in cancer research as they don’t seem to develop cancers,” Paul Van Daele an expert on Blesmols with the University of Ghent told mongabay.com.

Van Daele describes Africa’s mole rats as “soil architects much in the same way as e.g. the insectivorous European moles. However, they excavate extensive, anastomosing [or connecting] tunnel systems along which they forage for bulbs, roots and corms, their staple food.”

In 2002, Van Daele and his team noticed a distinct-looking mole rat in Zambia, although similar to giant mole rat (Fukomys mechowii) it was noticeably smaller. It took several years to confirm their hypothesis that they had uncovered a new species, but a recent study by Van Daele and his team in Zootaxa describes the world’s newest mole rat: Caroline’s mole rat (Fukomys vandewoestijneae), distinguished by a distinct skull shape and confirmed by DNA and chromosome tests.

The new mole rat was found in the Ikelenge pedicle, a geographic area that covers portions of Zambia, the Democratic Republic of Congo (DRC) and Angola. Although little research has been conducted in the Ikelenge pedicle, scientists believe it is a hotspot for animals found no-where-else, i.e. endemic species. Already scientists have discovered 28 endemic species: one amphibian, five mammals, three butterflies, and 19 dragonflies. This unique region is made up of gallery forests along rivers and wetlands (known locally as mushitus) and woodlands dominated by miombo trees, where the new mole rat was discovered. But, like most forests in the world, these are imperiled.

“As both gallery forest and miombo woodland are turned into cropland at an ever increasing rate, the maintenance of such an evolutionary theatre will presumably only be possible through conservation of wider protected areas such as the proposed two-pedicles transfontier conservation area,” Van Daele and colleagues write in their paper.

“She produced the first karyotype [description of chromosomes] of this species,” he says. “She died of malaria while we were living in Africa, on the very day we were together for 16 years. She was at that moment involved in an environmental education pilot project, ultimately resulting in the infusion of [environmental education] in the primary curriculum in Zambia.”

Every year scientists discover nearly 20,000 new species, around half of which are insects. Discovering new mammals is particularly rare. For example, in 2009 out of 19,232 new species described, only 41 were mammals (or 0.2 percent). Usually new mammals are small and belong to either the rodent or bat families.