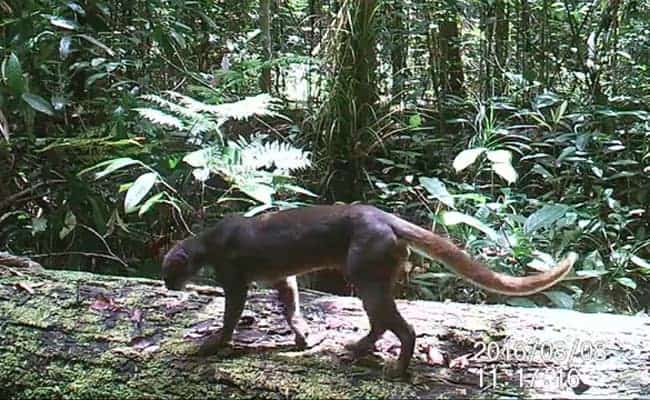 Researchers working in Borneo have captured footage of one of the most elusive and least studied wild cats on earth.

Bay cats, or Bornean cats, are about the size of a large house cat and can only be found on the island of Borneo. Very little is known about them, and they’ve continued to elude researchers.

No one knows exactly how many exist in the wild, but their population is estimated to be fewer than 2,500 individuals and they’re now listed as Endangered on the IUCN Red List of Threatened Species. Today, habitat loss, fragmentation and poaching are believed to be the biggest threats to their survival. Their land continues to be cleared for logging and palm oil plantations.

Now scientists are marveling over a surprising sighting after one was spotted about 40 miles away from nearest area they are known to exist.

The researchers weren’t looking for bay cats, but they captured footage of a male after setting up 52 camera traps in Rungan Landscape in Central Kalimantan, a region of remote forest in Indonesian Borneo, in an attempt to learn more about the wildlife inhabiting the area.

“The type of tropical forest where we carried out our research is generally considered to be of relatively poor conservation value,” said Dr. Frank Van Veen, of the University of Exeter. “However, we have found that this landscape actually represents a mosaic of forest types that supports a high diversity of wildlife, including a number of endangered species.

Researchers believe the discovery points to the need for more surveys of areas that are understudied, underestimated and undervalued for their biodiversity.

“The discovery of the bay cat here illustrates that we cannot just make assumptions about the conservation value of remaining areas of rain forest, and that research on the ground is essential for the well-informed conservation. We now aim to carry out further studies to better understand how this relatively low-productivity forest can support such a high density and diversity of wildlife,” added Dr. Van Veen.

It’s also hoped the sighting will lead to more protection for the area where the bay cat was spotted, which would also benefit other wild animals who call Borneo’s rainforests home. This past summer, scientists predicted half of Borneo’s wild cats will go extinct if we don’t act now to protect them.

“There is still a lot we don’t know about the forests of Borneo and the clock is ticking. More surveys are needed to understand the distribution and ecological needs of Borneo’s wildlife if we are to save species on the brink of extinction,” the team added in a statement.

For more on how to help, check out the Borneo Nature Foundation.