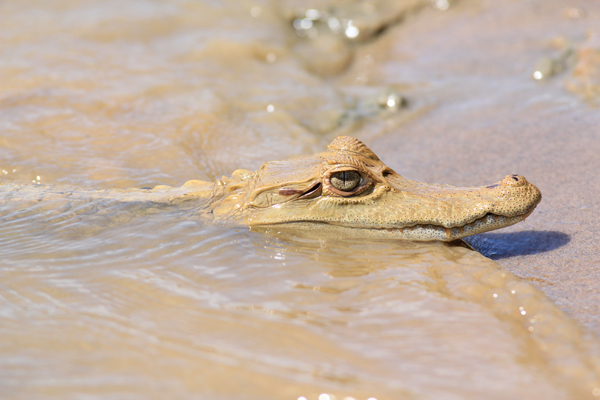 It is hard to reconcile visions of a sharp-toothed, scaly, and ferocious crocodile with anything other than a completely carnivorous diet. We have been bombarded with gory kill scenes in which crocodiles take down everything from impala to buffalo, but new evidence suggests we need to rethink crocodilians altogether.

When Steven Platt, a herpetologist for the Wildlife Conservation Society (WCS), was a young graduate student in the 1990s, he learned that scientists had begun to suspect that turtles could consume fruits and disperse their seeds. However, crocodilians were never likely candidates for reptilian seed dispersal, or as scientists call it “saurochory.” They had no need to eat fruit, and were even considered incapable of digesting plant material.

Ever since that class two decades ago, Platt wondered if perhaps biologists had it wrong. Now, his recent article in the Journal of Zoology forces scientists to reconsider these very efficient butchers in a softer light, placing crocodilians among the ranks of a handful of rare carnivores with a bizarre fondness for fruit.

Platt and his team have found fruit in crocodilian stomachs for years. The usual explanations suggest that the fruit were accidentally eaten along with other prey, or could be from the stomachs of recently consumed animals. In one of the first papers Platt ever published, he ventured the idea that crocodile species in alluvial floodplains used seeds as gastroliths, or stomach stones, but contended that fruit was not a source of nutrition to these archaic carnivores.

Today, Platt says, “I was just plain wrong, we were all wrong. It was just one of those things that was under our eyes for years, but nobody gave it much thought.”

There are 23 extant species of crocodilians, including alligators, caiman, salt and freshwater crocodiles, gharial and the tomistoma (or false gharial). Platt and his co-authors re-examined years of data on every species, and conducted a literature search for the most obscure reports on crocodilian feeding ecology. The result is a compendium of instances of intentional frugivory, or fruit-eating, among crocodilians, with 13 of the 18 species (72.2%) for which dietary data exists exhibiting frugivory to some degree.

There are reports of seeds in the stomach contents of ten crocodilian species, and observations of frugivory in at least three others, both in the wild and in captivity. Even the idea that crocodiles could not digest plant-material has now been wholly debunked.

Over half the seeds consumed by crocodiles (from 34 families and 46 plant genera) belonged to fleshy fruits, including large seeds such as the extremely hard Sacoglottis, and avocado-like Persea. Crocodilians were even spotted eating corn from wildlife feeders in Louisiana, and feasting on the fruit of Opuntia in Texas. Two tropical fruits—the alligator-pear (Persea americana) in Belize, and the alligator-apple (Annona glabra) across the Neotropics—have been named for the affinity that alligators have for them. The majority of fruit consumption data, however, comes from the analysis of stomach contents, a messy but rewarding endeavor.

An alligator is filmed foraging on kumquats in captivity

In his time, Platt has certainly “caught a lot of crocodiles, and pumped a lot of stomachs.” Since crocodilians do not chew their food but swallow their prey whole, they lack a gag response. This allows Platt to feed a tube into their esophagus, distend the stomach with water, and then just invert the animal to recover its last meal.

“Pumping a crocodile’s stomach is like opening a Christmas present,” Platt tells his students. “You never know what you are going to get.” His team has recovered everything from half-digested rats to live fish, after which many a student volunteer has joined the crocodilian in losing their lunch, according to Platt.

Adult crocodilians establish extensive home ranges (up to 5,000 hectares) and aggressively defend smaller territories within those areas. They achieve this by traveling remarkable distances during the day, from 12 kilometers in only two hours to a maximum of 23 kilometers in a single day. This incredible propensity for movement, coupled with extended gut passage times, could render crocodilians extremely influential seed dispersers.

Platt hopes that this discovery will spur a series of new studies. Together with the authors of this paper, he is eager to begin seed germination experiments, where crocodiles are fed fruit and the effect on the seed in the digestive tract is recorded.

“I think we are still a far cry from demonstrating that they are effective dispersal agents but the fact that they consume fruit, and a lot of it, reveals their potential to be important seed dispersers,” notes Platt. Crocodilians are not the only carnivores that some times consume fruit; others, such as margays and bush dogs, also eat fruit, and are occasional seed dispersers.

Crocodilians are an ancient group of reptiles, thought to have evolved approximately 80 million years ago. Nearly 20 million years before they emerged, fruiting plants (or angiosperms) radiated across the tropics, replacing other older plant groups. Thus, it is possible that the consumption of fruit has been occurring ever since the first crocodilians walked the earth.

Despite their savage image, crocodilians are important ecosystem engineers, affecting both wetland systems and prey populations. It now appears they may be important to seed dispersal as well—another strong reason for the conservation efforts of groups such as the Wildlife Conservation Society.

That For Info. My Favor Specie Crocodilian's

This is a very interesting in the findings of Crocodillians eating fruit and seeds.

Thanks for your feedback, Susan. Our daily challenge is to find the most interesting wildlife articles.

Extremely interesting! Thank you for this article.