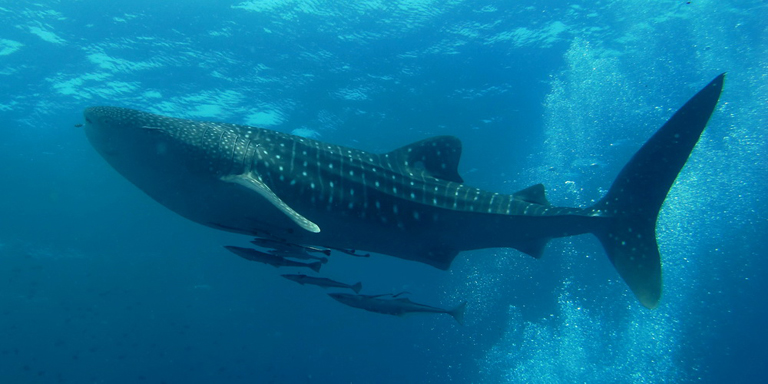 We know very little about the growth and reproductive biology of whale sharks, the world’s largest fish species. Because they’re listed as Endangered on the IUCN Red List, scientists are looking for ways to fill this gap in our knowledge without overly disturbing or distressing individual whale sharks.

Scientists at Nova Southeastern University (NSU) in the United States led a team of researchers who used minimally invasive methods for examining the growth patterns of whale sharks in the South Ari Atoll of the Maldives.

They report in a paper published in the journal Marine & Freshwater Research last month summarizing their results that, while visual estimates tended to underestimate the sizes of large sharks, laser and tape measurements yielded consistent results.

The team was able to take repeated measurements of the same individual sharks, identified by their unique spot patterns, over the course of the study period because many of the sharks return to the South Ari Atoll every one to two years.

The study was led by Cameron Perry, a graduate student at NSU when the research was carried out.

“What makes this a novel approach is that we took repeated noninvasive underwater measurements of live sharks over the course of a decade,” Perry said in a statement. “Up to now, such aging and growth research has required obtaining vertebrae from dead whale sharks and counting growth rings, analogous to counting tree rings, to determine age. Our work shows that we can obtain age and growth information without relying on dead sharks captured in fisheries. That is a big deal.”

The team found that 91 percent of the whale sharks in the Maldives aggregation were juvenile males. “[S]harks new to the area were significantly smaller than were returning sharks, which suggests that this site may constitute a secondary nursery ground,” Perry and co-authors write in the paper.

The team built models of whale shark growth patterns based on the measurements they had taken from 186 encounters with 44 sharks and determined that male whale sharks reach maturity at about 25 years of age, can grow to nearly 62 feet in length, and can live as long as 130 years. That means there could be whale sharks swimming in Earth’s oceans right now who were born in the 19th century.

Approximately 75 percent of the global whale shark population lives in the Indo-Pacific region of Earth’s oceans, with the other 25 percent occurring in the Atlantic Ocean. According to the IUCN Red List, combined data from both regions shows that the global whale shark population has likely declined by more than 50 percent over the past 75 years. “Major contemporary threats to Whale Sharks include fisheries catches, bycatch in nets, and vessel strikes,” per the IUCN’s threat assessment of the species.

“Growth and reproduction of whale sharks, which are endangered in many places, are poorly understood,” Mahmood Shivji, director of the Guy Harvey Research Institute at NSU and a co-author of the paper, said in a statement. “When you couple this lack of knowledge with the fact that whale shark products such as fins, meat and oil are highly valuable — they are harvested in many countries — one can quickly see the urgency in learning as much as possible in order to help save these majestic creatures.”

Perry added that he hopes the team’s findings can help preserve whale sharks in the wild. “The more we learn about these animals, their growth dynamics, where they go, what areas may be their nurseries, it can lead to a better understanding of their life history, which is imperative to guide conservation efforts.”

This article was written by Mike Gaworecki and first published by Mongabay.com on 15 Aug 2018.