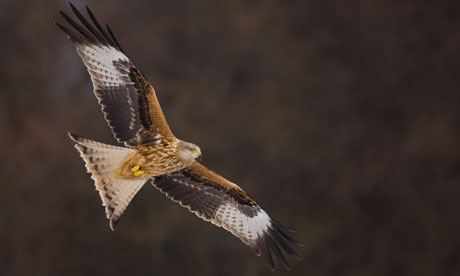 Bird experts believe that one of the UK’s most valued bird of prey colonies is being targeted after 16 raptors were found dead from poisoning in a small area of the Highlands. The bodies of 12 red kites and four buzzards have been recovered over the past two weeks within a two-square-mile area on the Black Isle, north of Inverness, in what ornithologists suspect is the largest mass poisoning of birds recorded.

The Royal Society for the Protection of Birds (RSPB) announced it was doubling its reward for a successful prosecution in the case to £10,000.

The attacks appear to be deliberately targeting the core breeding area, which has been one of the two main reintroduction sites for the species in the UK along with the Chilterns, west of London, for the past 25 years. It is a significant setback to a successful campaign led by Scottish government ministers to combat bird of prey persecution, which is illegal under wildlife conservation laws: after a record number of incidents five years ago, the number of poisoning incidents fell to three in 2012, and then six last year.

Six of the birds have already tested positive for poisoning in the Black Isle cluster, with cases centred around Connon Bridge, north of Inverness. The other birds are now being tested.

Police Scotland have refused to disclose the type of poison being used but RSPB experts say it appears to be highly toxic and fast acting. Many birds died with meat still in their beaks and gullets, said Brian Etheridge, an RSPB red kite expert on the Black Isle, who has worked on the reintroduction project since 1998 and tagged all the birds that were killed.

Etheridge said he feared many other red kites had been killed but their bodies had been collected by the poisoners because of the speed of the toxin. Most of the 12 birds so far recovered were in local woods, making them less easy to find.

“It’s right in the core breeding area, where most of the breeding pairs are concentrated,” Etheridge said. “I think there’s more out there, lying waiting to be found, so I think that 12 may be the absolute minimum. My experience from people who put poison out is they try to retrieve the bodies; they make strenuous efforts to retrieve all the bodies so they can destroy them. That way there’s less chance of them being detected.”

The scale of the attack raised concerns about the health of the Black Isle population. Until now the area has been seen as a safe haven for the species.

The RSPB announced it was doubling its reward for a successful prosecution in the case to £10,000 after an anonymous donor offered £5,000 to help find the perpetrator.

Duncan Orr-Ewing, head of species and land management with RSPB Scotland, said: “This appalling incident highlights the very real threat illegal poisoning poses to fantastic species like red kites. The vulnerable Black Isle population in particular has been repeatedly hit by deaths due to illegal poison use.

“The Chilterns population in southern England is nearly 10 times bigger, yet both projects started at the same time in 1989 with the same number of birds released into the wild. That is a shocking indictment of the behaviour of some in this part of rural Scotland.”

While the Chilterns’ red kite population has spread and flourished to become one of the largest bird of prey populations in Britain and Ireland with up to 1,000 breeding pairs estimated to have repopulated London and the home counties, numbers in the Black Isle have been flat.

Etheridge said there were only 25 breeding pairs in the core Black Isle population and another 30 pairs in the wider Easter Ross area and around the Dornoch Firth, 25 years after the birds were first reintroduced from Sweden in 1989. Native British red kites were persecuted to extinction in the 1800s.

Red kites have also been reintroduced in further batches in central Scotland and the south-west, with at least 214 breeding pairs now living across Scotland.

The RSPB is certain the bird’s numbers are being suppressed by deliberate persecution by grouse shooting estates, or as a result of attacks by gamekeepers on birds of prey generally. One recent study found that between 1999 and 2006, an estimated 166 red kites from the Black Isle were poisoned.

Etheridge said the RSPB was also very puzzled about the likely identity of the perpetrators as there were no sporting estates in the immediate area. Farmers are far less likely to target birds of prey than owners of grouse moors; red kites are scavengers not known for attacking lambs or other livestock.

He was particularly upset by the attacks since he had known some of the birds since birth, and had been studying one of the female red kites since he tagged her in 1998. She had successfully produced about 30 young during her 13 years as a breeding adult. “I was a familiar sight for her; she was a familiar sight for me. I have seen her winter at communal roosts and so she was like an old friend. I feel absolutely gutted that she’s one of the victims.”

Doug McAdam, chief executive of the main organisation for Scotland’s grouse moor owners, Scottish Land & Estates, said it unreservedly deplored the attacks and was encouraging members to help the police with any information.

Alex Matheson, an SLE member who runs Tollie, a red kites watching centre, with the RSPB on his estate at Brahan in the area where the dead birds were found, said: “I would like to express in the strongest possible terms our total condemnation of any form of illegal poisoning.”

Matheson, an active supporter of red kite reintroduction, added: “We are extremely proud of the Tollie centre and the enjoyment it gives to members of the public. An incident like this, right on our doorstep, is hugely disappointing.”

This article was written by Severin Carrell for the Guardian.