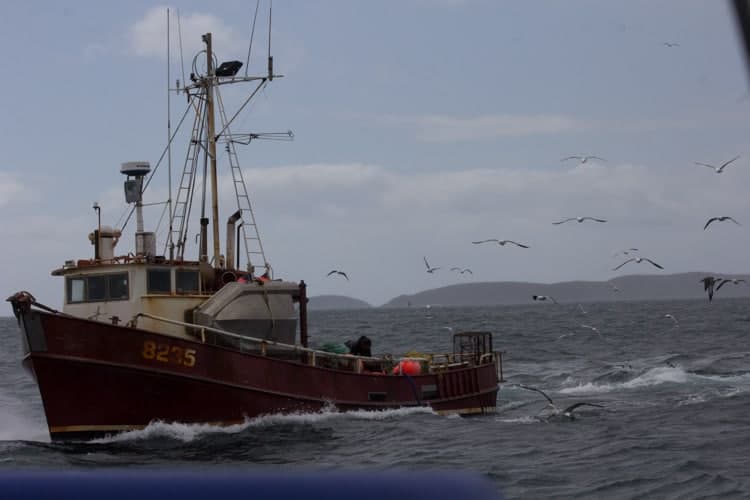 A couple of days ago I took our boat over to Bluff to collect a load of diesel fuel. The distance is about 22 miles, wharf to wharf, and Foveaux Straits has the reputation of being an unpleasant stretch of water. Its a well deserved reputation, being quite shallow, with significant tidal flows and forming a natural wind tunnel between the high lands of the South Island & Stewart Island..

In explanation re the diesel fuel, we use diesel as a heating source in our home (Sails Ashore Bed & Breakfast) and in our daughters holiday home. (Kowhai Lane Lodge). Stewart Island quite literally runs on diesel. Electricity is diesel generated, at about 2.5 times the cost of mainland electricity. So it makes no sense to burn diesel, to generate electricity and then use the resulting energy for heating. Best to burn it direct. And it’s much more cost effective than coal, and a fraction of the carbon footprint. Kowhai Lane uses around 4 litres per room night booked, where as I would expect for the same heat profile to use around 20 to 25 kg of coal. This for domestic hot water and central heating. So between two houses, boat and two diesel vehicles we use around 6000 litres per year. I transport this myself, on deck in 200 litre drums. And I like a reasonably calm day, as 18 drums are never easy to stow safely. Our weather lately has been boisterous to say the least, and we were getting low in storage, so Tuesday was the best of a bad run.

I took my camera, hoping to get a few photos… never let a chance go by… but conditions just weren’t good enough to get out on deck until we were well back under the lee of Stewart Island. And there we passed a local fish boat working cod traps, surrounded by the normal attendant flock of assorted seabirds, including Bullers and Shy Mollies, Cape Pigeons, Black Backed and Red Billed Gulls.

I used to be a fisherman, and seabirds were always in attendance, and in fact a nuisance during the day, as we had great difficulty returning undersized fish to the sea without them being taken by hungry mollies. These would come close enough to catch and as the small fish would lie on the surface briefly, stunned by the transition from sea to deck and back again, even though out of the water for only a few minutes. Left unchecked, few if any would have survived the mollies, whereas if wecould keep the gluttons away most if not all would return successfully to the bottom. My own technique was handfuls of pebbles, thrown shotgun style.

However the birds did not miss out, as cleaning my catch on the way home would see several hundred “frames” vanishing down the throats of anything up to a couple of hundred hungry birds.

There is a point to all this and it’s fishing related seabird mortality. Cod potting, and in fact any trap fishery ought never ever negatively impact on seabird numbers. Sadly the same is not true of trawling (birds getting caught and dragged under by the warps while towing) and of long-lining (birds taking baited hooks before the line vanishes while being set). And we won’t even think about drift netting, which is just a disaster for marine life and birds. However Scientists and concerned fishers are addressing the problems associated with trawling and long-lining, and by all accounts techniques developed are working well.

added 26th October 2012 ….. I still watch the fishing industry with interest, and this link turned up today from “Seabird Solutions”

But an Upside to Fishing ??

But what I have pondered for many years is the positive impact that fish boats have on bird species. Over a season I would have generated around 6 tonnes of offal,… and we were one of the smallest operators… with most of that offal vanished down a mollies throat. An easy meal, by any criteria. Certainly easier, and quicker than open ocean hunting. As an aside I have spent over 40 years at sea and have never once seen a mollie or albatross feeding, other than around a fish boat.

The fishing industry comes in for a load of bad publicity regarding seabird mortality, and much of it is well deserved. But there is an upside to commercial fishing interaction with seabirds as well.

Perhaps there is a research paper there for some student.

P.S. I apologise for rambling on a bit, blame it on hours sitting at the helm, with little to do but ponder on the things around the boat.