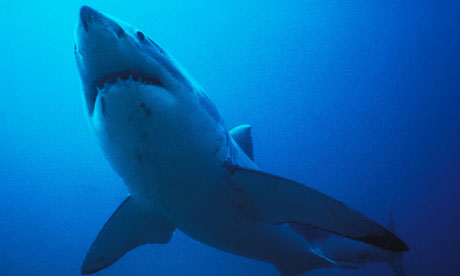 Sharks swimming free in the oceans may soon become more valuable as tourist attractions than when caught, sliced up and served in soup, according to a global study published on Friday. The study urged better protection for the fish, from Australia to the Caribbean, to reduce catches of an estimated 38ma year to meet demand for shark fin soup, mainly in China.

Andres Cisneros-Montemayor of the University of British Columbia, who was also lead author of the study, said: “We are hoping that people will recognise that sharks are not only valuable on the plate.”

Shark-watching tourism generates about $314m a year and is projected to surge to $780m in the next 20 years, according to the study in Oryx – The International Journal of Conservation.

By contrast, the landed value of world shark fisheries is now $630m a year and has been declining, according to experts in Canada, the US and Mexico.

Jill Hepp, director of global shark conservation at the Pew Charitable Trusts, said there should be more sanctuaries. “Many countries have a significant financial incentive to conserve sharks and the places where they live,” she added.

The study is one of many about how to aid world fisheries, which have been hit by pollution and overfishing. Tourism draws almost 600,000 people annually to watch sharks from hammerheads to great whites, supporting 10,000 jobs in 29 countries, it said.

One problem is the separate sources of demand. Asian lovers of shark fin soup are unlikely to abandon the dish in favour of tourism, which has so far been mainly for westerners.

Carl Gustaf Lundin of the International Union for Conservation of Nature, said that fishermen need to see a higher value from organising tourism. These measures could include organising boat trips to view sharks or renting scuba gear, rather than from killing them for fins.