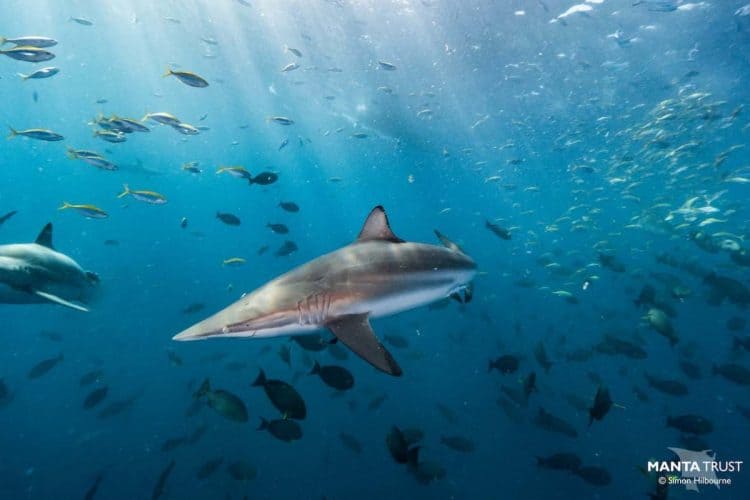 It’s not easy to find sharks these days. Just ask Demian Chapman, a marine scientist who leads Global FinPrint, a project that assesses shark populations on reefs worldwide. But he says there is a spot where they’re often found: the Maldives, a tiny nation of islands speckled in the Indian Ocean.

“The Maldives is a place where we drop cameras, and we see sharks frequently, which really is very unusual,” Chapman told Mongabay in an interview. “You know, most places we drop cameras and see nothing [or] one shark or two sharks, but then the Maldives is pretty consistent.”

Sharks are plentiful in the Maldives thanks to a 90,000-square-kilometer (34,750-square-mile) shark sanctuary — that’s about three times as big as Belgium — set up in 2010 with a blanket ban on shark fishing and finning. But conservationists say these advances are now under threat as the Maldivian government considers lifting its 11-year shark-fishing ban.

In a parliamentary committee discussion in late March, fisheries minister Zaha Waheed said talks were underway to open a managed shark fishery, which would help boost the economy.

“[Sharks] are easy to overfish due to their biological nature,” Hashim told Mongabay in an email. “[They’re] long-lived, late to mature, [and have] long gestational periods and low productivity. The Maldives has never been successful in managing the shark fishery, so a managed shark fishery is just not feasible because of poor enforcement and monitoring as it is.”

News of the Maldives potentially lifting the shark-fishing ban has garnered local and international attention. More than 200 organizations formed an alliance to show their support for maintaining the country’s shark sanctuary.

“From a conservation standpoint, it’d be much easier for us to put this incredible pressure on the government not to lift this ban now, rather than allow this ban to be lifted, and then have to fight tooth and nail to get a ban reinstated,” Simon Hilbourne, a researcher at the Manta Trust, one of the organizations in the alliance, told Mongabay in an interview.

Chapman, an associate professor in the biology department at Florida International University (FIU), says setting up a sustainable shark fishery would be difficult, requiring a lot of time, effort and financial resources to implement. He added that very few nations have managed to do so.

“The odds are good that you’d experience declines, and these declines could well lead to local extinctions, so that the Maldives would look a lot more like some of these other countries in the western Indian Ocean [where sharks are scarce],” he said. “You could certainly see that happening without any sort of major, major investment to manage those fisheries.”

Tourism is considered the most significant economic sector in the Maldives, accounting for about 30% of its annual gross domestic product. And according to many experts, sharks play a crucial role in attracting visitors.

Chapman says he thinks tourism numbers would drop substantially if shark fishing were allowed to recommence.

“It wouldn’t take much shark fishing to deplete the numbers to the point where divers just wouldn’t really see sharks [in the water], and they might actually be more likely to see sharks dead on a beach or in a market,” he said.

A 2018 study found that protected shark populations in the Maldives increased demand for scuba diving by 15%, and even produced about $6 million in tourism revenue for the Maldivian economy. It also found that declining shark populations and the presence of illegal fishing during dive trips could decrease dive tourism by up to 56%, and result in an economic loss of about $24 million each year.

“The question becomes, if Maldives was to open the shark fishery, could they do that and hit that really, really low target?” Chapman said. “And then the second question is — is it worth it to make all those investments to jeopardize the tourism industry?”

There are about 30 species of sharks in the Maldives, ranging from vulnerable common thresher sharks (Alopias vulpinus) to endangered whale sharks (Rhincodon typus) to critically endangered scalloped hammerheads (Sphyrna lewini). Many of these shark species are still recovering from the overfishing that occurred before the government set up the sanctuary, experts say.

Due to the COVID-19 pandemic, which has slowed the stream of tourists who normally visit the Maldives each year, there have been increased calls to reopen the shark fishery as a way “to make a quick buck,” Hashim says.

Illegal shark fishing also seems to be on the rise in the Maldives. For example, in January 2021, customs officials seized 21 boxes marked as “salted fish” that contained 429 kilograms (946 pounds) of shark fins, worth about $190,000, at the nation’s international airport. And in March, authorities detained a group of people after encountering a vessel carrying shark fins, shark meat, and whole sharks at the Southern Ari Atoll.

Following a period of local and international outcry, there have been some unofficial reports that the Maldives will not be lifting the ban, which has raised hopes in the conservation community. In a recent post, the U.K.-based NGO Shark Guardians also wrote that it met with minister Waheed and a senior fisheries officer, Munshidha Ibrahim, who told them the ban would not be lifted.

But there is still room for concern, according to Hashim. She said the fisheries ministry is also discussing a reintroduction of long-line fishing for bigeye tuna (Thunnus obesus), which could result in a significant amount of shark bycatch, and would, in essence, “abolish the shark sanctuary.”

“There is political pressure to open the shark fishery within the Maldives parliament, and there is huge support from the voter base, so it has unfortunately become a very real threat to the recovering shark populations,” she said. “I fear that some loophole could be introduced which would pave the way for the black market to operate more easily.”

This article by Elizabeth Claire Alberts was first published on Mongabay.com on 16 April 2021. Lead Image: Spinner shark in the Maldives. Image by Simon Hilbourne / Manta Trust.