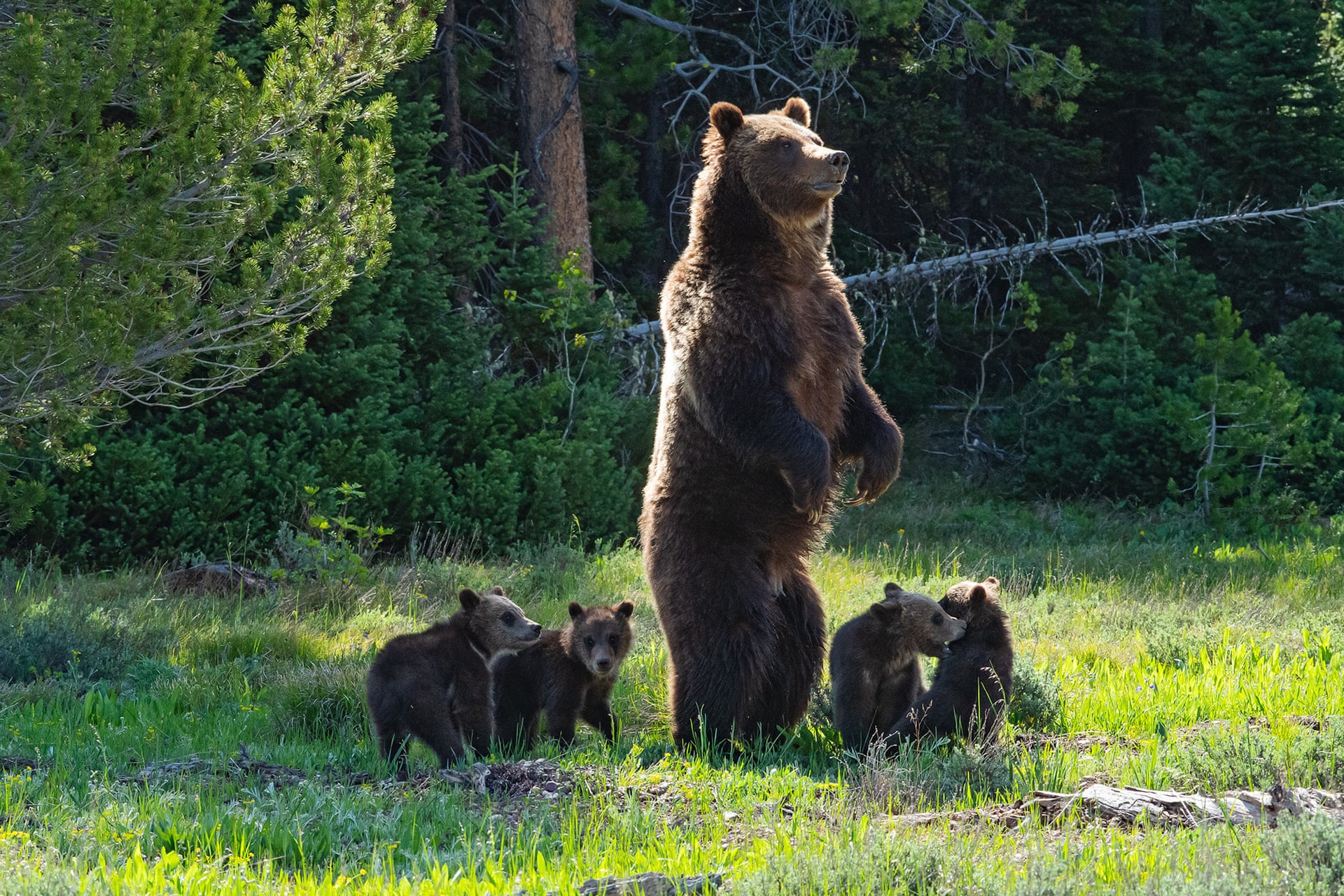 A few weeks ago, a nature photographer who lives near Yellowstone national park sent a four-word text message to Dr Jane Goodall, the British primatologist.

The photographer, Thomas Mangelsen, was referring to a grizzly bear known as “399”, probably the most famous wild bruin in the world. At 24, not only is she one of the oldest grizzlies living outside a zoo, she has also continued having cubs to a venerable age, becoming a poster child for the recovery of grizzly bears in the greater Yellowstone ecosystem.

And no grizzly has done more, through her own behavior, to change a perception that members of her species are temperamental menaces ready to attack people at the slightest provocation.

In mid-May, the 350lb grand dame emerged in Grand Teton national park, striding alongside Pilgrim Creek. Trailing close behind the matriarch were four cubs, born this winter in a wilderness den high in the snowy backcountry.

Mangelsen has been chronicling the life and times of 399 for nearly 15 years.Goodall counts herself among the bear’s most ardent admirers, and, holed up in England, was eagerly awaiting word on whether 399 had survived the long winter. Mangelsen said she was ecstatic.

The population of grizzlies in the Yellowstone region was given protection under the Endangered Species Act in 1975 after their numbers dipped to less than 150, and scientists feared they could disappear altogether. But their recovery, thanks to habitat protection, crackdowns on poaching and a ban on hunting, is considered one of the greatest conservation triumphs in US history.Today, at least 700 grizzlies inhabit the region and, luring tourists, they have paid tangible economic dividends.

Born in 1996, 399 has demonstrated the importance of a healthy female bear to an overall population. At least 22 bears are descended from her, both cubs and cubs of cubs (in human terms, grandchildren). It’s possible she could become a great grandmother – a senior citizen who is still having offspring of her own.

Generally pacific in nature, 399 has raised her broods by roadsides in view of groups of curious humans, including some who have exercised poor judgment by moving closer to take photographs of her and her cubs. She has, with one exception, demonstrated incredible restraint.

In 2007, she mauled a Wyoming schoolteacher after he strolled by a spot where 399 and three cubs were feeding on an elk carcass in the bushes.The teacher survived, and the park superintendent determined that the mother was only behaving naturally, acting in defense of the cubs and their meal.

Yet researchers note that it’s not easy being a young grizzly, even with a keen parent like 399. About half of those in 399’s bloodline have died. One was shot by a big-game hunter, another was killed for preying upon cattle, and a few have been struck by cars.The drama has played out in front of legions of human onlookers who, in turn, have circulated details on social media as if 399 were the star of a soap opera.

The oldest grizzly in the Yellowstone region documented with cubs was 27. Mangelsen had a hunch that 399 would emerge this year with more of her own. During the summer of 2019 she was seen in the company of a regular suitor, a huge 600lb male nicknamed Bruno who is believed to have sired some of 399’s earlier infants. Mangelsen and other observers were not disappointed.

“Four-cub litters are rare,” said Frank van Manen, a senior research biologist who oversees the Yellowstone region’s Grizzly Bear Study Team. “We have documented females producing cubs well into their early- to mid- 20s, but a litter of four at that age is definitely unique.”

Most visitors come to Yellowstone hoping to catch a glimpse of bears. There is a heated public debate about whether sport hunting of bears should again be allowed in Wyoming, Montana and Idaho, where the Greater Yellowstone population lives. That question, along with the possible removal of endangered species protections, is tied up in the courts.

To manage the throngs of bear watchers, Grand Teton national park, next door to Yellowstone, has mobilized its “bear brigade”. Apart from trying to keep safe distances between bears and tourists, it has an added coronavirus-era task of doing the same between people. Last week, it was not uncommon to see people trading information about the whereabouts of 399 through open car windows.

For Steve Franklin, a retired firefighter and arson investigator from Phoenix, 399 possesses a particular mystique. Franklin told the Guardian that he had just made his own contribution to the lore of this celebrity bear, having spotted her before anyone else.

“I dreamed of being the person who sees her first in the spring and gets the photo,” Franklin said. “Everyone who knows the legacy of 399 wants to be that person.”

This article was first published by The Guardian on 9 June 2020. Lead Image: Grizzly 399 stands to get a better look at the growing crowd of bear watchers while her four cubs play. Photograph: Thomas D Mangelsen/mangelsen.com