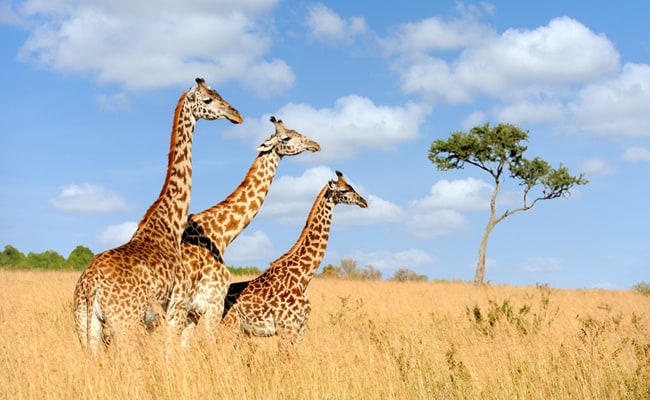 While conservationists are continuing to raise awareness about the “silent extinction” giraffes are facing in the wild with little fanfare, an undercover investigation has just exposed how the trade in trophies and parts in the U.S. is contributing to their decline.

The investigation, which was conducted by the Humane Society of the United States (HSUS) and Humane Society International (HSI), found giraffe parts and products being sold both online and in stores by at least 51 dealers across the nation.

Items for sale ranged from boots, hides, bones and carvings to feet, bags, leather and full taxidermied trophies, among many other items, that were being sold for hundreds to thousands of dollars.

Even more troubling were the links to sellers who had been involved with wildlife trafficking, lies being told to justify the trade, such as giraffes needing to be killed to protect people because they’re dangerous and destructive, and the amount of parts and products being contributed by trophy hunters who kill them just for fun.

According to the HSUS, on average, more than one giraffe is imported by a U.S. trophy hunter every single day.

Sadly, this ongoing trade is putting them at serious risk and making the U.S. a significant player contributing to their decline.

“Purchasing giraffe parts puts the entire species at risk. The giraffe is going quietly extinct. With the wild population at just under 100,000, there are now fewer than one third the number of giraffes in Africa than elephants,” said Kitty Block, acting president and CEO of the HSUS and president of HSI.

Despite their stature as the tallest land animal on earth, and being one of the most iconic and beloved species in the world, giraffes have been quietly disappearing from the landscape at an alarming rate. Since the mid-1980s, the population of giraffes has declined by a startling40 percent, leaving only an estimated 97,560 individuals in the wild.

At the end of 2016, concerns about the threat of extinctionpromptedthe International Union for the Conservation of Nature (IUCN) to change their status from a species of Least Concern – skipping right over Near Threatened – toVulnerableon the IUCN Red List of Threatened Species.

At least they’re not without advocates who are working to see them protected, and to ensure the U.S. isn’t complicit in their disappearance. Last year the HSUS, HSI, Center for Biological Diversity, International Fund for Animal Welfare and Natural Resources Defense Council petitioned the U.S. Fish and Wildlife Service to protect all four genetically distinct species of giraffe equally as endangered under the Endangered Species Act.

At the time, they found that nearly 40,000 giraffe parts and products had been imported into the U.S. over just the past decade, but listing them would ban most imports of trophies and parts coming into the U.S., and regulate domestic trade, in addition to helping raise much-needed awareness about their plight. It would also generate funding for more research and in-situ conservation efforts to protect them in the wild.

Unfortunately, there’s been no response to the petition, and no action has been taken on their behalf to protect them from further exploitation.

You can help show your support for these gentle giants by signing and sharing the petition urging the U.S. Fish and Wildlife Service and Secretary of the Interior to protect them as endangered species.