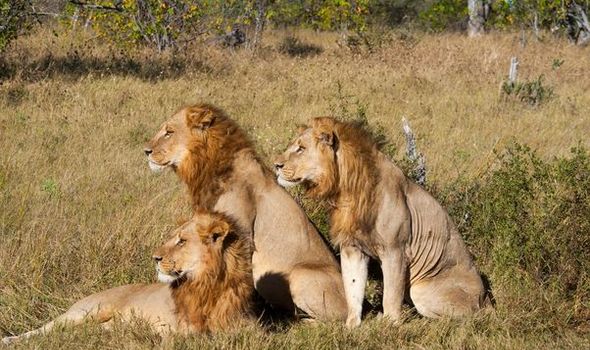 A LARGE lion with an impressive dark mane is released into the enclosure and pads slowly past a hunting party without a care in the world. When one of the hunt organisers whistles, it pauses, as if to make itself an even easier target, confirming that, far from being a wild animal, it is entirely used to interacting with humans.

The impact of the first bullet, fired into its front leg at close range from a jeep – despite it being illegal in South Africa to shoot an animal from a vehicle – makes it leap into the air. It then rolls forward, gets up awkwardly, and reels for a few seconds in confused agony as though on hot bricks.

As it scampers off on three legs to hide in the bush, the guide shouts to his client: “Shoot him again!”

The hunter obeys, multiple times. Having killed the animal, he is seen standing over it and saying in a mockfeeble voice: “Hey you, I’m sorry, but I wanted you.”

Then, nauseatingly, he kisses the carcass. The kill was marked with sustained laughter, celebratory high-fives, gleeful handshakes or slaps on the back – acts of jubilation simply not warranted given that the targets would make sitting ducks look challenging.

This shameful practice – captured on a safari cameraman’s video – is what is known as canned hunting, where the balance of power is tilted so heavily away from the quarry and in favour of the stalker that it is absurd for it to be considered in any way an honest contest.

The most appropriate phrase is “shooting fish in a barrel”.

Tenacity and skill come a distant second to securing the instant gratification of a quick hit.

I have lost count of the number of people who post on social media platforms such as Twitter so-called “kill shots” of themselves grinning at the camera (or, even worse, kissing their partner) alongside a beautiful animal which they have recently slaughtered.

I find it repulsive. Throughout the 1990s, the number of lions held in captivity in South Africa for canned hunting was comparatively low, in the hundreds. By 2005, its popularity soared, with an estimated 2,500 non-wild lions in South Africa. Attempts were made to both define and regulate canned hunting. These moves were challenged in the courts by powerful pro-hunting groups and in 2010 South Africa’s highest court of appeal essentially found in favour of the hunting industry.

Currently, canned hunters are willing to pay anything from $3,000 to more than $40,000 to shoot a male lion in South Africa, depending on its size and the quality of its mane and skin.

According to Four Paws, the international animal rights organisation, between 600 and 1,000 lions are killed in canned hunts there annually. The digital age offers hunters an even simpler way to take part in it.

Wealthy clients, many of whom have little hunting experience and may be poor shots, are emailed brochures by hunting companies with photographs of available game.

Rather like a customer at a drivethrough hamburger restaurant, they place their order before, eventually, pulling the trigger or firing their crossbow.

Today, the number of captive lions dwarfs the existing wild lion population. South Africa has the biggest captive cat industry in the world.

Although some of these lions are destined to be shot in canned hunts, many more will be killed simply for their bones.

One of the most nefarious aspects of the captive-born lion industry is that its practitioners lure tourists into their web to perform an unwitting role in the ghastly cruelty. In what is known as “consumptive tourism” or “encounter tourism”, lions become exotic playthings of the general public in a business worth $180 million a year. The harsh reality, however, is that these animals should not exist.

Having been bred for the specific purpose of attracting tourists to the park before they are considered old enough to be slaughtered, they serve no purpose in the animal kingdom. They exist solely slaughtered’ to enrich those who own them or who have rented them from a breeder.

Its proponents say canned hunting protects the wild lion population by easing the pressure that previously existed from the hunting fraternity to shoot lions in the wild.

There is no evidence to back up this assertion, however.

Indeed, a covert undercover team I assembled last year to compile evidence that was presented to the South African police discovered that wild lions are being kidnapped in order to improve the bloodlines of captive populations.

Not every person who participates in a canned hunt does so knowingly.

Some hunting companies trick clients into believing they are paying to go on a “fair chase” hunt when, in fact, this is a lie. Advocates of canned or captive-bred lion hunting also argue it aids conservation, that the revenue it generates helps the state to protect the wild population and maintain land.Yet any sense that canned lion hunts safeguard wild lions is dismissed by those who have watched as the industry has mushroomed.

Canned hunting is considered responsible for a surge in poaching. And the increase in demand for lion parts like bones has led to an increase in supply. Lion and tiger skeletons are highly prized in parts of Asia among those who believe it can cure joint pain, arthritis and osteoporosis.

Others buy bone products because they think they will give them greater physical strength or will boost their virility or to use as an aphrodisiac. This “traditional medicine” is pure quackery, of course, but its impact has been devastating for the world’s dwindling wild tiger population.

Tiger wine, produced after a bone is steeped in alcohol then blended with herbs and spices, sometimes drunk by businessmen keen to display their wealth, is as costly as champagne. A particularly sick new trend within the bone market is “pink bone”, achieved by deboning the tiger or lion while it is still alive. This technique leaves blood in the bone and the resulting products are held in even higher regard.

Buying bone is as bad as purchasing any Class A substance from a drug dealer. The whole sordid business around lion bones is, seemingly, immersed in corruption at an official level and is intricately entwined with organised crime at street level.

The global trade in wildlife parts is worth billions of dollars a year. Indeed, it is considered to be the third most profitable trade on the black market after narcotics and weapons, meaning there is likely to be substantial crossover between all three.

The business even has a kingpin, dubbed by investigators “the Pablo Escobar of wildlife trafficking”.

He is Vixay Keosavang, originally from Laos, a figure so notorious that in 2013 the US government placed a bounty of up to $1 million on his head for information leading to the dismantling of the Xaysavang Network, an international wildlife trafficking syndicate which he is believed to run.

In a further disturbing twist, some campaigners fear that increasing numbers of lions are being cross-bred with tigers to produce so-called ligers, the offspring of a male lion and a tigress. With their squashed faces and abnormally large bodies, ligers can grow to be far bigger than their progenitors.

A three-year-old tiger can be the same size as a nine-year-old lion. Its accelerated growth means it produces more bone more quickly. Once slaughtered, it generates greater profits.

So what can be done? First, the South African government must ban captive-bred lion farming, which has no conservation value. The case for a uniform nationwide hunting law, as opposed to individual laws in each province, should also be made.

Wildlife and conservation groups must coordinate campaigns. Airlines, shipping firms and freight firms must be lobbied until they ban the transport of trophies and bones of captive-bred lions. The world’s tourist industry must educate visitors to South Africa that cub-petting and “walking with lions” experiences are just part of this cruel business. It should become socially unacceptable for any tourist to indulge in any of these activities.

Furthermore, I call on the British Government – and every other government – to follow the example of Australia, France and the US and introduce laws to discourage the import of captive-bred trophies. There are difficult decisions ahead, but it is imperative that everybody, especially tourists, helps ensure the barbaric abuse of lions is consigned permanently to the dustbin of history.

SIMBA, the lion king I saved when, in 2018, I set up an undercover operation in South Africa with the aim of revealing more of this sordid business to the world, little did I realise it would end with me saving a lion from certain death.

Simba was a male lion, aged about nine, with a superb thatch of coarse hair and a scar beneath one of his piercing yellow eyes.

It is likely Simba came from a lion farm where thousands are bred every year; torn from their mothers when days old, used as pawns in the tourist sector, and then either killed in a “hunt” or slaughtered for their body parts.

In between, they are poorly fed, kept in cramped, unhygienic conditions, beaten if they do not “perform” for customers, and drugged.

My investigator posed as the representative of a wealthy American client who wanted to hunt and kill a lion. A price of $23,000 was agreed but on the day of the hunt my investigator said he did not want to shoot the lion but to save it.

In April 2019, nearly a year after first being emailed Simba’s picture, we secured his rescue.

To have saved just one out of a possible 12,000 captive-bred lions from certain death felt like a small but crucial victory in the war to end one of South Africa’s darkest industries.

This article was first published by The Express on 20 June 2020. Lead Image: Sick slaughter of innocent lions bred to die in agony must end (Image: Getty).