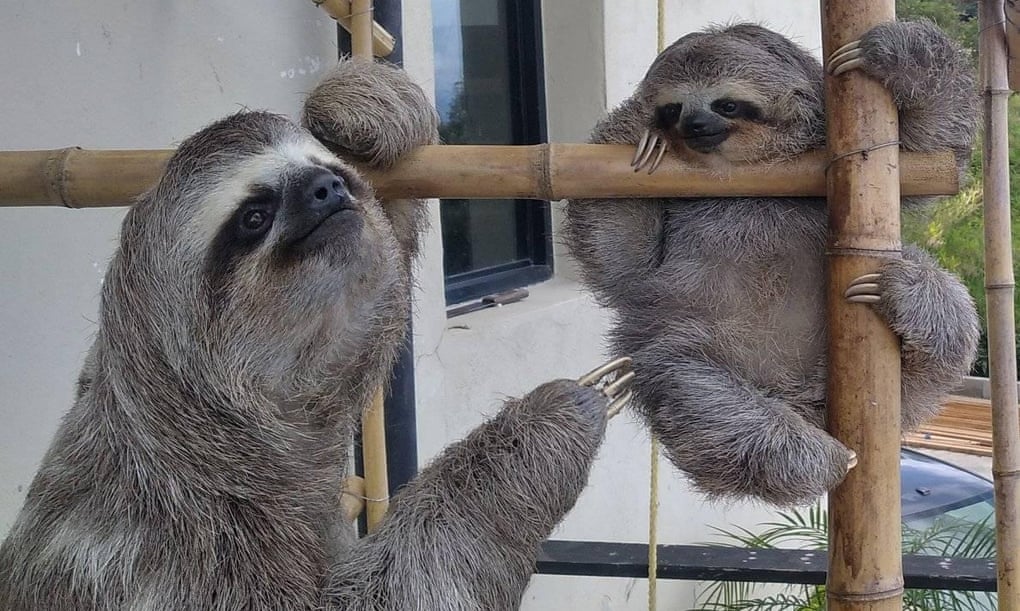 It is almost a year to the day that Haydée and Juan Carlos Rodríguez first spotted an injured sloth lying by the side of the road while they were out on a drive. In an attempt to cross from one tree to another in the Venezuelan town of San Antonio de Los Altos, near Caracas, the sloth had climbed on to a high-voltage power line and been electrocuted.

The animal had lost the claws on three of its paws because of burns and the Rodríguezes were told by a local wildlife expert that it was not likely to survive, and that they should leave it to die.

Today, the sloth is not only thriving but has proved the inspiration for the couple to create what they believe to be Venezuela’s first dedicated sloth rescue and rehabilitation centre. “Our goal is to give injured sloths a second chance at life in the wild,” says Haydée, 36, a marketing specialist. “We hope to make people more aware of what to do if they see [injured] sloths, and to contribute to an understanding in our country of this species, which is so enigmatic and little-studied.”

The Rodríguezes’ work is vital considering the state of wildlife rehabilitation and conservation in Venezuela, which has been underfunded for years. Once a prosperous petrostate, Venezuela has been in the grip of unrelenting economic and political crisis since 2014, when it was hit by tumbling oil prices. Its GDP has shrunk by two-thirds within five years, and is expected to continue contracting as the country’s woes are exacerbated by the Covid-19 pandemic.

Hyperinflation is running at about 5,500%, according to the IMF, and it is estimated that more than 90% of Venezuelans live below the poverty line. The humanitarian crisis has been compounded by US-imposed sanctions, which are ostensibly targeted at specific politicians, but have been condemned as having a devastating impact on the civilian population. In light of these problems, wildlife conservation has taken a back seat. “It’s not high on the government’s agenda to control poaching and deforestation,” says Jon Paul Rodríguez, an ecology professor at the Venezuelan Institute for Scientific Research (IVIC), and co-founder of Provita, a wildlife conservation NGO.

Imerú Alfonzo Hernández, an environmentalist who has assisted the Rodríguezes with their rescue work, has an even more dire view of the conservation sector in Venezuela. “The destruction of the oil industry and resulting unemployment has made the state resort to environmental degradation [in search of revenue], without measuring the consequences,” says Hernández, who is president of the National Association of Eco-Defenders, which nurtures activities for environmental protection in low-income communities. Due to a petrol shortage, he adds, more trees have been cut down for firewood.

Although Venezuela is one of the most biodiverse countries in the world, its rich ecosystems have been eroded by gold mining and other industrial activities, Hernández says. According to Global Forest Watch, 533,000 hectares of humid primary forest were destroyed between 2002 and 2020 – an area more than three times the size of London. “The environmental protection programmes of universities, foundations and associations like ours have been practically eliminated, donations are almost zero, and research is paralysed [by lack of funding],” Hernández says.

Sadly, he would not survive in the wild. But he is absolutely not a pet, and we refrain from touching him
Juan Carlos Rodríguez

Over Zoom, the Rodriguezes explain how that first rescue inspired them to do more the country’s sloths. Chuwie – named after the Star Wars character Chewbacca – moved the Rodríguezes with his will to live, despite having lost a kidney and with his leg wounds turning septic.

“Sadly, he would not survive in the wild with just one clawed paw,” says Juan Carlos, 45, whose regular job is as a 3D rendering artist. Chuwie munches serenely on the leaf of a fig tree in the background, displaying the distinctive dark patch of fur that males grow on their backs in young adulthood. “But he is absolutely not a pet, and we refrain from touching him. Sloths are solitary animals.”

Currently, the Rodríguezes have three other sloths in their care, which they affectionately refer to as their tenants, including a baby who lost its mother, has a voracious appetite and is on track to be released into the wild when it is strong enough. The couple have constructed climbing frames and generously sized cots for recuperating sloths, which are placed on their balcony overlooking the mountains. In the garden, there is space for the animals to practise climbing in the trees. “We try as much as possible to simulate the environment where they live, because ultimately that’s where we want to return them. It’s where they belong,” Juan Carlos says.

At present, there is no comprehensive research on the sloth population in Venezuela. “I would estimate there are hundreds of thousands of them,” says Jon Paul Rodríguez. “They’re common on edges between urban and forested areas … but they need continuous tree cover to move around. If the forests go, they will die.”

In the last five months, Juan Carlos and Haydée have rescued 41 sloths, and returned 36 of them to the lush greenery where they are often found. A few could not be saved – they had sustained fatal wounds from electrocution, which the Rodríguezes say is the most common cause of death that they see. Dog bites and road accidents are two other reasons cited in calls they receive.

“We [humans] have invaded their space. When they can’t move from tree to tree, they get confused and climb on to power lines. That’s how they meet their death,” Haydée says. All of these rescues are documented on an Instagram page named after Chuwie. The couple also diligently collect data on the sloths’ dietary and lifestyle habits.

With no sloth conservationists to go to within Venezuela, the couple have had to build a network of veterinarians and experts from across South America willing to provide advice and support. Sam Trull, director of the Sloth Institute in Costa Rica, which rehabilitates sloths and reintroduces them into the wild, says she now considers the couple her friends, and that she has found it rewarding to be a part of their mission.

“The more sloths I help, the better,” Trull says. “For now, except for the maned sloth in Brazil and the pygmy sloth in Panama, [three-toed] sloths are not believed to be endangered. But that’s a false sense of security, because there’s no information about their numbers, and there hasn’t been much interest in studying them until recently. What I like to say, which sounds a little cheesy, is that just because sloths are not endangered, doesn’t mean they’re not in danger.”

In Venezuela, Haydée and Juan Carlos are determined to continue their work, inspired by Chuwie’s remarkable restoration to health. “To us,” Haydée says, “he is the most beautiful sloth in the world.”