Mornings dawn bright in Oklahoma, and one of my favorite places to revel in the awakening landscape is Lake Carl Blackwell, west of Stillwater. In addition to the reservoir itself, the park’s mix of forest, shrub woodlands, and native prairie provides great opportunities for birding and other wildlife viewing. I took advantage of all of those yesterday morning, in a delightful 2-hour ramble through the park.

It had been a still and chilly night, and the light winds were conducive to a frost. While several hours later my son would be playing basketball outside in his shorts and T-shirt, I was well bundled and spent a good deal of walking time with my gloved hands deep in my coat pockets. 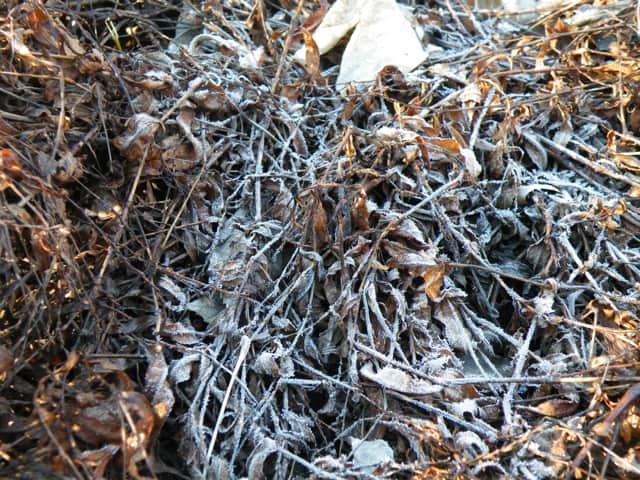 In addition to the habits of our local deer, there have been some big changes at the park as of late. One of short duration was the tornado that ripped through the area in May of 2010. That storm brought down many big trees, and crews at the park have been busy cleaning up and clearing out downed wood since then.

The changes wrought by a single storm, however, pale in comparison to the drought that has taken hold in the Southern Plains region of the U.S. The Oklahoma Climatological Survey provides some perspective on what conditions have been like here for the past century or so. Despite some severe droughts earlier in the century, the last few decades have provided our state with above average precipitation.

Here’s a graphical illustration of how 2011 played out with respect to temperature and precipitation in the context of the 30-year average:

January and March were dry, but we seemed to rebound a bit in February and April. Then May was dry, and the bottom fell out in June. A couple of storms in August (including one that destroyed my stockade fence and cost me my favorite silver maple) moistened the ground for a bit, but note the above-average temperatures from June through August. It was not only dry, it was HOT, and growing conditions almost could not have been worse. The graph above does not include Oct.–Dec. data, and we had a couple of rainy days in that period, but the warm, dry trend is continuing. The image below from the U.S. Drought Monitor places our situation in Oklahoma into a broader context. 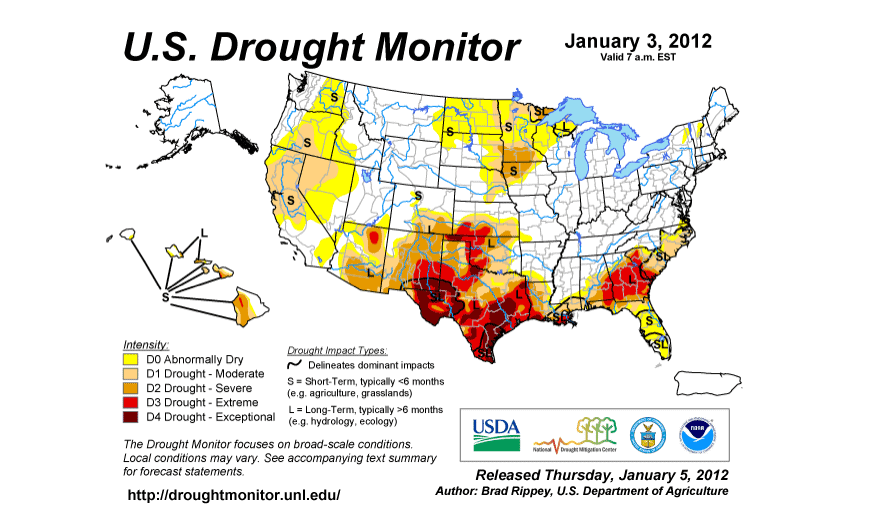 So how has this drought been affecting wildlife in my area? Check out these images of falling water levels and former lake bottom: 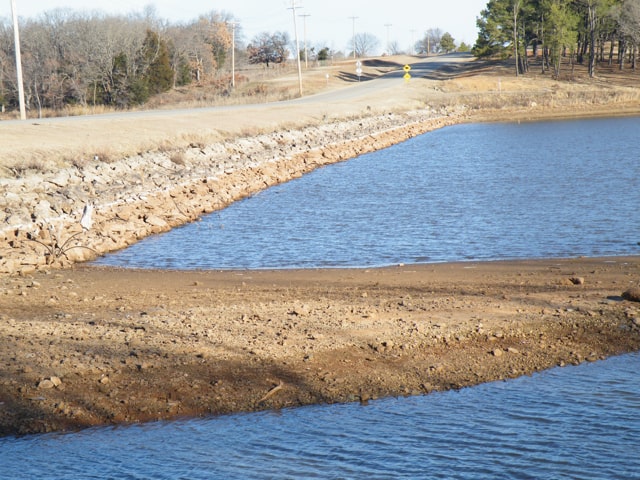 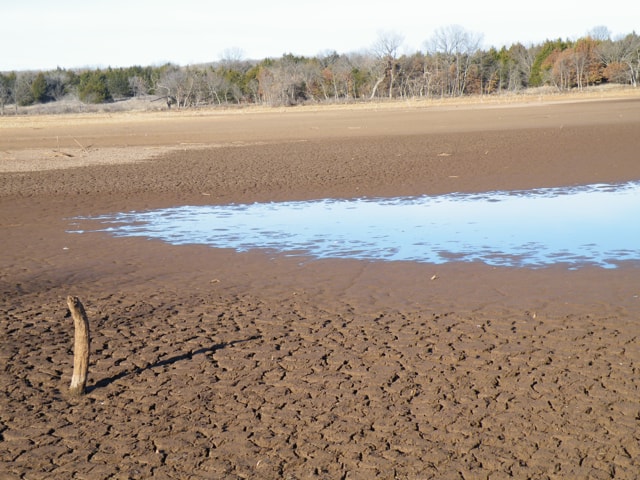 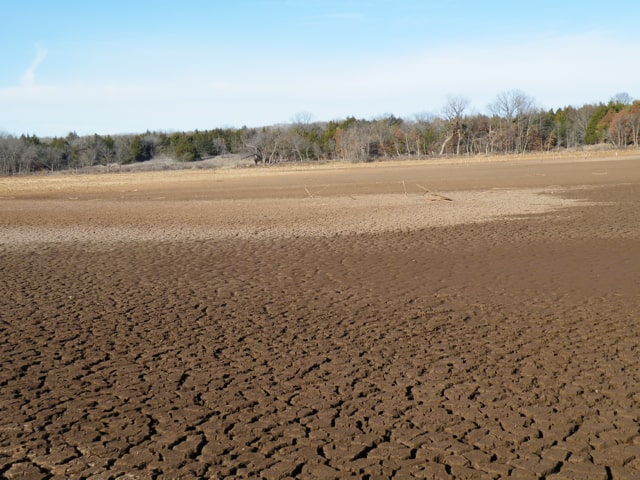 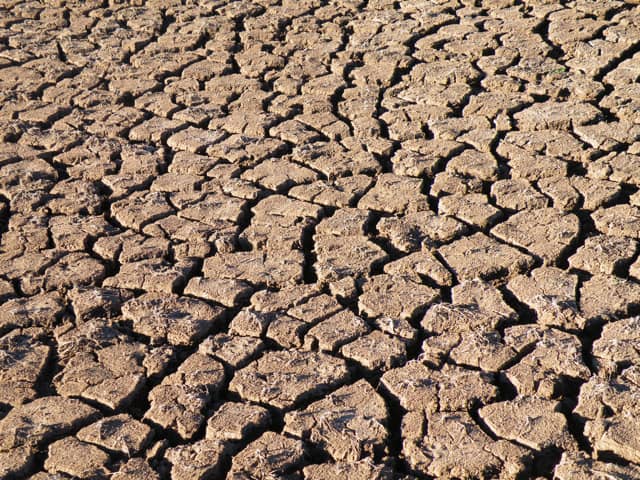 But here’s where this story takes an interesting turn. Fish gasping for air in shrinking pools is sad to see, but challenges for some always become opportunities for others. In this case, much of that hard-pan, former lake bottom has been colonized by sedges and forbs. There might be 10 hectares of new weedy fields on former lake bottom at Carl Blackwell right now, and the wintering sparrows are gorging themselves on the seeds. 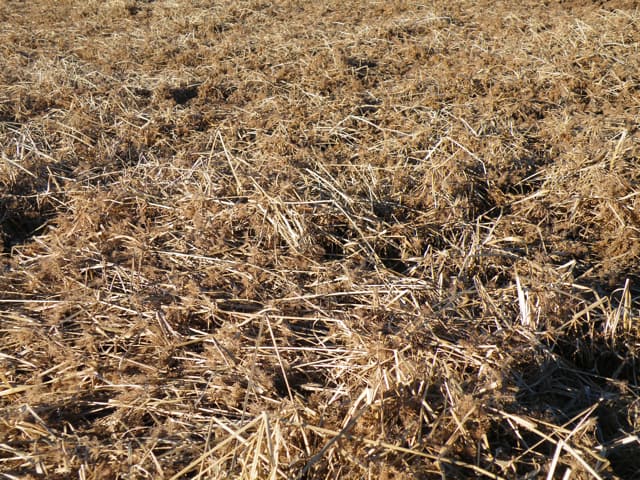 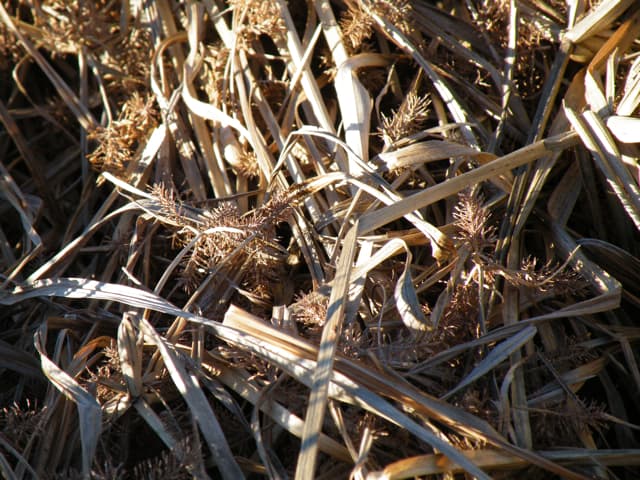 Where there are seeds, there are small birds to eat them. I flushed a Sedge Wren from this spot on Dec. 18th; I found one very near the same spot yesterday (Jan. 7). Also like my last visit in December, I found many sparrows in these new, weedy and seedy fields, especially near the forest edge/former shoreline where abundant food mixes with the safety of dense cover. These photos illustrate just how dense some of that cover can be. If I can’t even get a clear shot at one with a camera, I suppose the local predators are easily avoided as well.

In the end, I found these 35 species on my morning ramble (report generated in eBird). They are a reminder that there is much to be enjoyed and understood in our own surroundings, where the only constant is change.