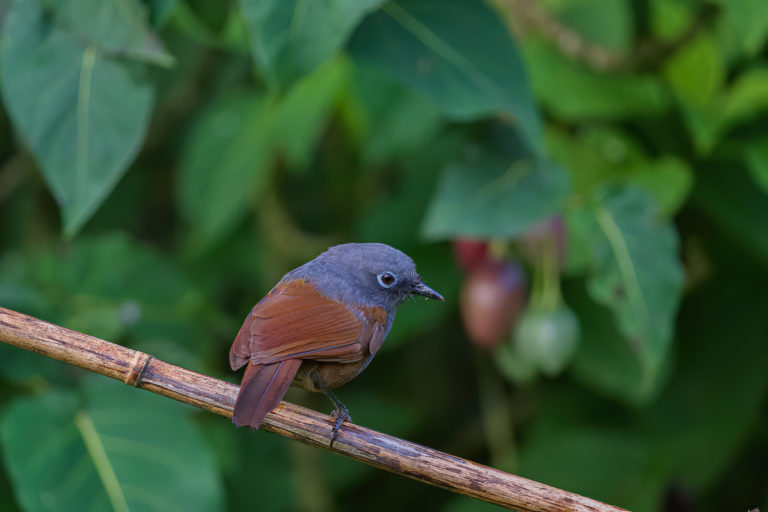 JAKARTA — The songbird trade in Indonesia has battered the wild population of the Sunda laughingthrush, an important seed disperser in the primary forest ecosystem, a new study shows.

Bird market surveys in more than 30 cities across Indonesia between December 1991 and February 2020 point to a population decline in the Sunda laughingthrush (Garrulax palliatus), attributed to its popularity among songbird collectors. The bird was encountered in two-thirds of 365 surveys observed by the group of scientists from Indonesia, Canada and the U.K.

“We wanted to call attention to the detrimental trade in laughingthrushes, and songbirds in general, while exploring the effects this trade has on the lesser-studied Sunda laughingthrush in particular,” study lead author Boyd Leupen, program officer at Vancouver-based nonprofit Monitor Conservation Research Society, told Mongabay in an email.

The species is popular for its piercingly loud and unique call that hobbyists often use to train other songbirds for competition. Songbird contests in Indonesia have spawned thriving networks of clubs, online forums and blogs. The country’s president, Joko Widodo, is an avid collector of songbirds, which he also enters into singing contests. In 2018, he even offered to buy a prize-winning bird worth up to $137,000.

Bird-keeping is a popular pastime among Indonesians, particularly the Javanese, for the most part because it signifies status and is thought to promote peace of mind. The hobby has grown popular beyond Java, thanks largely to the government’s transmigration program that relocated residents from the densely populated island to other parts of the country. That has allowed bird-keeping, among other Javanese customs, to take root in those regions.

The Sunda laughingthrush is an important species in its native habitat of primary forests in Sumatra and Borneo, where it spreads the seeds of many endemic plant species. However, the forests of both islands have been largely cleared in recent decades by logging, mining and agricultural activity.

The thrushes observed in the trade are also all likely wild-caught birds, given the absence of known commercial captive breeding records for the species, the study says.

“It remains easier and much cheaper to take birds from the wild than to breed them in captivity,” Leupen said. “Commercial captive breeding, especially of laughingthrushes, requires a significant investment of time and money, whereas wild birds can easily be captured for a very minimal investment.”

He added, “The fact that other popular laughingthrush species are disappearing from the wild and from the markets, means that the Sunda laughingthrushes are not an even higher risk of being exploited for trade, as they are likely to be used as a substitute species.”

The species isn’t on the latest version of the Indonesian government’s protected species list, but its trade is controlled by a harvest quota set by the environment ministry. For most of the period during which the surveys were conducted — 1987 to 1993, 2008, 2010, 2015 and 2016 — the quotas for Sunda laughingthrush were set at zero, effectively prohibiting the capture of wild birds. However, large quantities of Sunda laughingthrushes were still found for sale in the markets during this time, the study found.

For 2018 and 2019, the harvest quota was set at 150, exclusively for the province of Jambi in Sumatra. But the researchers found three times as many birds for sale in 2018 alone. In 2020, the quota was increased to 450 (250 for Jambi and 200 for West Sumatra province), notwithstanding reported population declines on Sumatra.

“Unfortunately these quotas are not always based on scientific evidence, and research has shown that wildlife traders in Indonesia largely ignore these quotas,” Leupen said. “Anyone can visit one of the bird markets in Jakarta to see blatant disregard for the quota system.”

The authors have called on Indonesian and international conservation authorities to reassess the status of the Sunda laughingthrush’s wild population to reflect the current condition. They have recommended the species be reclassified on the IUCN Red List from near threatened to vulnerable, putting it in the threatened category. They have also called on the Indonesian government to provide full protection for the species to prohibit all capture and commercial trade in wild-caught individuals.

“As more songbirds disappear from forests, ecosystems will become destabilized, which will eventually impact the environment on a national and international scale,” Leupen said.

This article by Basten Gokkon was first published on Mongabay.com on 22 December 2020. Lead Image: The Sunda laughingthrush. Image courtesy of Mohit Ghatak.