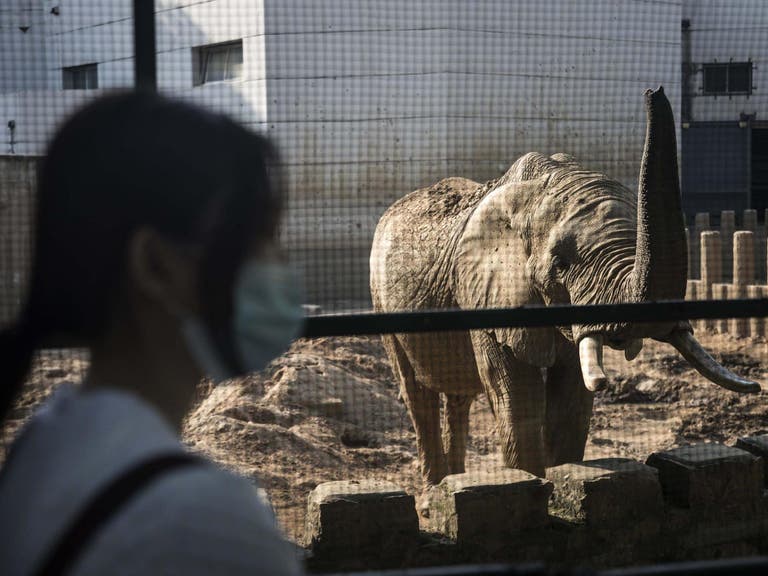 South African traders with China are illegally selling thousands of wild animals threatened with extinction and endangered, under the guise of legal exports, according to an investigation.

Monkeys have been stolen from the wild, and together with cheetahs, tigers, rhinos, lions and meerkats, they have been trafficked to circuses, theme parks, laboratories, zoos and “safari parks”, researchers found.

Their report says at least 5,035 live wild animals were exported to China from 2016 to last year – “an extremely conservative” estimate – including chimpanzees and “a bewildering number” of giraffe, which “are also eaten in China”.

The researchers uncovered how some traders have links to international organised crime syndicates and the system is riddled with fake permits, but not a single offender has been prosecuted.

After arriving in China, where laws on captive-animal welfare are “non-existent”, South Africa’s animals often become untraceable or disappeared, suggesting they either died or were sold on, the report says.

To make matters worse, in a trade that is expanding, “treating wildlife as if it is merely a commodity to be farmed” risks “unleashing myriad Covid-type diseases”.

The South Africa-based groups Ban Animal Trading (BAT) and the charitable EMS Foundation, which examined wild animal exports from 2016-19, hit out at the supposed myth that legal trade crowds out the illegal trade and that animals are treated well in legal deals.

“The legal and illegal trade are so intertwined as to be functionally inseparable,” the report states. “The research demonstrates that South Africa’s live wild animal trade with China is riddled with irregularities that are exploited by traffickers. There are gaping loopholes in the global permitting, enforcement and oversight system.”

Zoos, as well as brokers and wholesale companies, are behind the trafficking of animals caught from the wild, going to destinations that are often pure fiction; most permits are in breach of regulations, and their verification largely absent, meaning most wild animal exports in 2016-19 were probably illegal, according to the report authors.

Regulation is “failing dismally, imparting a false sense of security for those who believe that the international trade in wildlife is justified and sustainable” while “such security is wildly misplaced and, far from contributing to conservation, the legal trade is one of the single biggest factors currently undermining conservation.”

The two groups examined the scope of South Africa’s trade with Beijing by visiting the claimed destinations, examining licences and analysing data from the Convention on International Trade in Endangered Species.

“Our investigation of theme parks and zoos revealed that nearly all trained primates are not bred in captivity, but were wild-caught and illegally traded out of Africa and Indonesia,” according to the study, which also says South African exotic primate breeders export hundreds of marmosets to Chinese laboratories or breeding farms each year.

And the trade in chimps violated several regulations, yet there were no repercussions, the groups said.

More than 100 South African giraffes were sent to a Chinese zoo that holds the world record for having the highest number of hybrid animals “which have zero conservation value”.

But a global system of paper export permits allows for pervasive fraud, with widespread false declarations by traders, agents and exporters, the research found, and “once animals leave South Africa it is impossible to identify where they will land up”.

The South African government says the country ranks as the fifth-richest in Africa and the 24th richest in the world for numbers of endemic species of mammals, birds, reptiles and amphibians. It says rhino horn sales are subject to strict regulation including documentation.

South Africa is not the only country that sells wildlife to Asia. Zimbabwe has regularly exported young elephants to zoos in China since 2012 – 108 in all, according to Humane Society International.

Zimbabwe has previously said it has more elephants than it can cope with, and must be allowed to benefit from their numbers.

Demand in China for products made from all types of wildlife remains high, with a 2018 investigation finding tiger wine openly sold in shops. The report authors note that consumption of animals including tigers, threatening wild populations, is legitimised by captive breeding. There are more tigers in captivity in the world than in the wild, WWF figures show.

Calling for “transformative changes” to prevent more wildlife exploitation, and prevent more coronaviruses, the study warns: “Nothing short of a global paradigm shift is necessary if we are to prevent further planetary disruption that unleashes Covid-type viruses.”

The changes would include a ban on “wet” live animal markets, captive wild animal breeding and the stigmatisation of wildlife trade and consumption.

“Certainly there is no clear evidence that the legal trade somehow crowds out illegal trade,” the report says. “If anything, the presence of a legal trade … normalises consumption and triggers demand for wild-origin animals for commercial use and consumption.” And it condemns the idea of well regulated markets as a smokescreen for vested interests.

“Animals confined to life in captivity are welfare-deprived to the point that we are eroding our own humanity by continuing to endorse this system,” the document says.

Two years ago, a report by the same groups concluded South Africa’s growing trade in lion bones should be halted, and keeping and breeding lions and tigers should be curbed.

This article was first published by The Independent on 18 May 2020. The Independent is campaigning for tighter regulation of the world’s wildlife trade. Lead Image Source: An elephant at a zoo in Wuhan, China; the country regularly imports African wildlife (Getty)

Once again, ‘mankind’ is slowly, but surely, destroying the world we live in and OUR ONLY HOME. When will these barbaric countries wake up and actually realise that they are totally self-centered on money and profits, thinking ‘I’m alright Jack, f**k everyone else’ Lets face it, CHINA is probably the most gut-wrenchingly, cruel, brutal and depraved country on this planet, the CHINESE masses have NO compassion, NO decency, NO integrity, NO empathy and certainly NO MORAL ETHICS WHATSOEVER. They will abuse, torture, kill and eat ALL species, nothing is sacred to them…..they eat anything that walks, crawls, flies or swims,… Read more »

These people, whether South African or Chinese, are despicable. However, if people didn’t attend these circuses or buy the goods made from these wild animals, there would be no market and therefore no need to smuggle these animals or body parts. The consumer is largely to blame for the continuance of this trade. All imports/exports of these animals and animal parts should be banned.

I have a feeling the headline is a little bit misleading. It makes it sound as if it were official government policy to export these animals. However, there is no doubt that there is a lot of corruption and crime going on.

Another disgusting example of humans cruel evil and beyond stupid

so who are we meant to blame…is it the 3 Africans or the Chinese….or is it all of us for letting it happen and saying nothing?