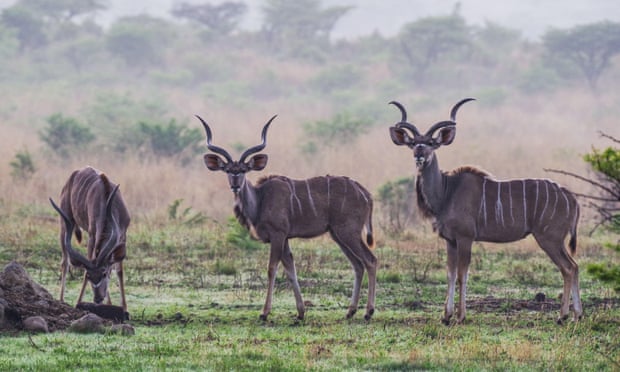 Impala run through the thorn bush, ibis fly above the lake and lightning forks over the horizon as a storm rolls in from the Drakensberg mountains.

The visitors driven across the 10,000 or more hectares of the Nambiti game reserve in South Africa’s KwaZulu-Natal province see what they think is an unchanged, and unchanging natural landscape.

Njabulo Hodla, the assistant manager of the reserve, sees something else: thickening undergrowth that someone must cut back, tracks which need clearing, fences to repair and animals that may have to be sold eventually. “It’s tough, really tough. I’ve never seen a season like it,” said the 31-year-old, who has worked at Nambiti since 2008.

Across the continent Covid has hit South Africa the hardest with more than a million confirmed cases and 29,000 deaths according to official figures. As elsewhere in Africa, the pandemic has wreaked massive economic damage, with thousands of businesses failing and tens of millions unable to earn a living. The economy shed 2.2m jobs in the second quarter of 2020.

The huge tourist industry – which employs around one in every 20 workers and provides just under 3% of GDP – has been devastated.

Once the December holiday season meant tens of thousands of foreign visitors spending hundreds, even thousands, of dollars every day. Now, with the rate of new infections in the country soaring as authorities struggle to check a second wave, no one expects the tourists to come back soon.

South Africa’s 500 or so private game reserves are often in more remote and impoverished parts of the country. They spend considerable amounts each month to feed and care for the animals. Many have been forced to close permanently, lay off staff and sell, or even shoot, animals. Other have survived – just.

“Reserves like ours went from quite a nice income supporting 300 jobs and a massive conservation project to literally nothing. We fell off a wall,” said Clarke Smith, chairman of Nambiti. “We are still feeling the pain … and the impact on the region is very marked.”

Nambiti is a community-owned project, unlike many, so a substantial proportion of profits and an annual lease are paid to local villages. This year, these revenues are much reduced and, with many employees of the reserve still on reduced hours or at home, the coming months will be very difficult.

“Instead of an end-of-year bonus, people are taking home only half a salary, or nothing,” said Hodla, who grew up in one of the nearby villages. “The communities round here are just on the line. The reserve plays a major role. Everyone knows someone who works here.”

Many fear that if the crisis continues for many more months, hundreds of thousands of hectares across South Africa that have been converted to more lucrative game reserves in recent decades will revert to cattle or cereal farming – with a massive loss of habitat for endangered animals and other species.

But if the business of wildlife conservation has been hit badly, so too has that of safeguarding other parts of the country’s heritage.

Like many parts of rural South Africa, the north of KwaZulu province suffered from acute unemployment, massive health problems including TB and HIV, and deep poverty even before the pandemic. Industries have been gutted in recent decades, with many mines and factories closing.

In some places, such losses have been partially compensated by what has been a booming trade in battlefield tourism. Tens of thousands of British visitors have come to walk the sites where British troops fought Zulus in the bloody war of 1879 that consolidated the imperial hold on southern Africa.

The battlefields of Isandlwana and Rorke’s Drift are the main attraction for British tourists usually old enough to be fans of the 1964 film Zulu that dramatised the story of the catastrophic British defeat and last-ditch stand at the sites.

This winter – or summer in the southern hemisphere – both battlefields are “empty”, the memorials, graves and museums deserted.

“There is no work. We are just sitting there. The situation is so bad. There is a drought and no crops in our fields, and a sack of mealie [maize flour] costs twice as much as it did back in the spring,” said Dalton Ngobese, a local guide, who has not worked since March.

With the tourists gone, so too are the hawkers who sold ethnic craft, snacks and water. A portion of the entrance fee to the battlefield site goes to schools, so this source of revenue too has dried up.

The accommodation lodges were shut for much of the summer, and have only recently reopened, welcoming far fewer guests. The lodges provide jobs and also fund support programmes for local students, charitable foundations, orphanages and other projects.

“If we are suffering, the entire community takes a knock,” said Shane Evans, manager of the Isandlwana Lodge, which hosted groups touring the battlefield.

In the village of Isandlwana, there is resignation. With so few jobs locally, men have traditionally travelled to Johannesburg, six hours’ drive north, to work in mines or, more recently, hotels. But both industries are suffering too and most of Isandlwana’s residents who had jobs have lost them.

Government aid has been patchy, and a huge burden for a country still battling the legacies of the racist, repressive apartheid regime. The ruling African National Congress, in power since 1994, is accused of incompetence and corruption, but also has to deal with a flagging economy, tens of millions of people in poverty and massive debts. A job support programme has been guaranteed until the end of the year, but money is slow to come through.

One consequence in the villages around Isandlwana is that crime is rising, with cattle theft and burglary getting worse, said Ngobese. A recent drought has meant local communities around the battlefields have been unable to plant the crops that traditionally supplement incomes and diet.

Nellie Buthelezi’s husband was among those laid off by the local government in swingeing job cuts earlier this year, while the lodge where she works has been shut since March. The 41-year-old mother of four has lived in Isandlwana all her life and cannot remember times ever being as bad.

“Food is expensive, and it goes so fast. We’ve got no money for rent,” she told the Observer. “We just hope to God for a better new year.”

This article was first published by The Guardian on 3 January 2021. Lead Image: Three kudu in Nambiti game reserve in KwaZulu-Natal where visitor numbers have slumped. Photograph: TravelMuse/Alamy.