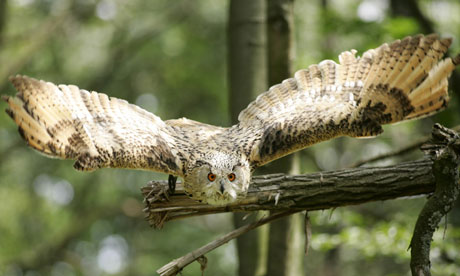 The European eagle owl Bubo bubo is not a popular bird. It is very large and ferocious, and although it lives and successfully nests in Britain it is officially regarded as an alien and a danger to our own birds of prey because it does not like to share its hunting territory.

Foxhunts have further dented the bird’s reputation by using these owls to exploit a loophole in the ban on hunting. This allows packs of dogs to be deployed to flush out foxes, which then in theory are killed by birds of prey. Hunts purchase and use both eagle owls and golden eagles for this purpose although the number of foxes “killed by accident” by hounds far exceeds any caught by birds.

Although it possible for a trained eagle owl to kill a fox this would not be a normal prey. In the wild a less risky catch and more attractive and tasty meal would be a rabbit or rat.

One supporter of the eagle owl is the World Owl Trust based in Ravenglass in Cumbria, which has officially changed its position and now regards the species as British. The reasoning is that these birds are breeding in Britain and was once native, as fossil evidence shows. Anyway the Trust says it might always have been here in small numbers because it is secretive, lives in remote places, and there have always been sporadic reports of it breeding in Scotland.

The Trust’s view is that no one complains about the little owl, which is an introduction to Britain, while the return of the white tailed eagle and the red kite is celebrated. “We suggest that the opposition to the eagle owl is perhaps down to its size and expertise as a predator rather than being based on scientific fact or logic.”

One of the owl’s problems is that it is not cuddly. A fully grown female is roughly eight times the size of the much-loved barn owl. It has a wingspan of up to two metres, is more than half a metre high and weighs up to four kilos. A breeding pair requires a territory of several square miles, driving off or even killing other birds of prey.

The RSPB accepts that a small number of eagle owls nest in Britain but says their origin is difficult to prove. The species has been kept in captivity for centuries and dozens are known to have escaped, although it is possible wild ones have flown over from the continent.

A government sponsored risk assessment of the species says eagle owls attack other rare raptors like hen harriers because they share the same territory, and are a danger to this endangered species. The RSPB counters that a much greater danger to hen harriers and other birds of prey are gamekeepers who illegally shoot and poison them.

In a classic British compromise the eagle owl officially remains an alien species but as a resident wild bird is protected from being killed.

This article was written by Paul Brown for The Guardian UK.