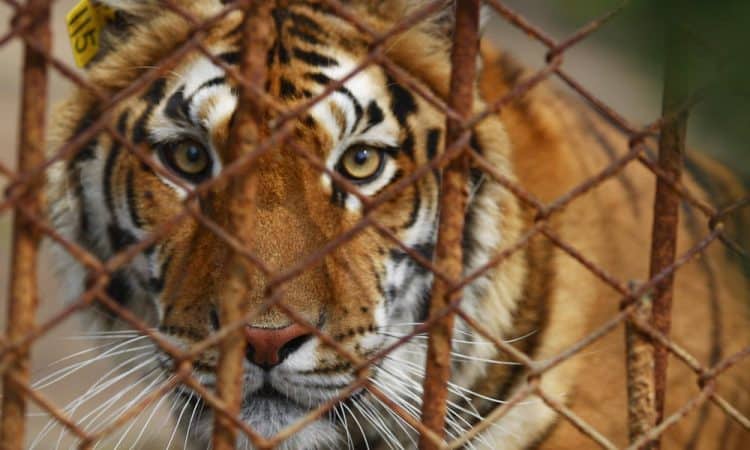 In a story that may make you think twice about doing drugs and/or trespassing, last week a Houston man entered a seemingly vacant garage to smoke marijuana in privacy and found himself face-to-face with a tiger.

Fortunately – well for the man, anyway – the tiger was in a cage. He promptly called the local police to squeal on himself and report what he had seen. The authorities admitted that they were skeptical of what the man alleged, thinking he may just be under the influence and confused or just straight up lying, but decided to check it out in case it was true.

After obtaining a warrant, Houston Animal Enforcement was able to enter the garage and see the tiger for itself. The tiger, which they nicknamed Tyson after the tiger in the movie The Hangover, was affable with the visitors and appreciative to be given water.

Although evidence points to the tiger being abandoned for a while if not forever, he was left with a lot of meat to dine on, which kept him fed and relatively healthy.

The good news is that Tyson is moving on to a bright future. His advocates were able to find a spot for him in unusually quick fashion at Cleveland Amory Black Beauty Ranch, an animal sanctuary in Murchison, Texas, where he can live (mostly) free amongst other rescued animals including some tigers. He’s already adjusting to walking on grass, which is a weird sensation for animals unaccustomed to that texture.

However, Tyson’s happy ending shouldn’t end the discussion about the conditions in which he was discovered. He was thirsty, he was trapped in a cage that was much too small for his 350-pound frame and the whole garage smelled like ammonia because no one bothered to clean up his urine. It’s clear that Tyson wasn’t receiving adequate care.

Even if Tyson weren’t being neglected, providing a large cat like a tiger with a good life in a private residence seems pretty difficult. Nevertheless, in Texas, there’s no law against owning wild and exotic animals like tigers and people are unfortunately taking advantage of that. In fact, after India, Texas has the second highest tiger population in the world.

To prevent future tigers like Tyson from being held in this same manner – and other wild animals like lions, gorillas, bears that have no business living in someone’s house or backyard – please sign this new Care2 petition imploring Texas politicians to change the laws. All of these creatures deserve proper space to roam around, not to be trapped in captivity in unnatural habitats.