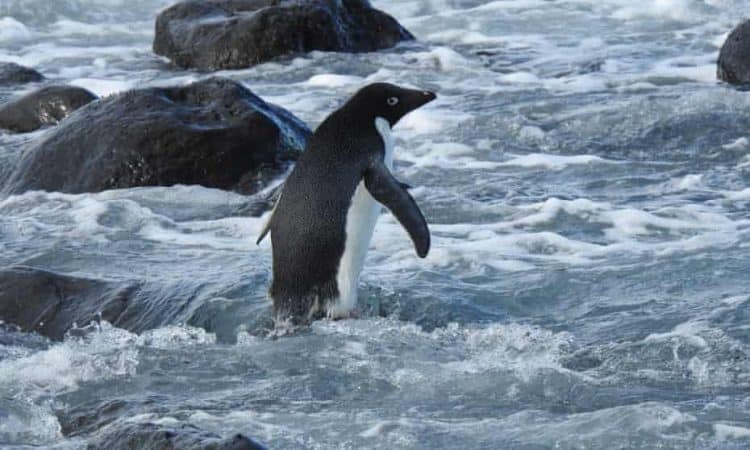 An Antarctic penguin has traversed 3,000km of icy waters to find himself far from home and on new and puzzling shores: the south-eastern coastline of New Zealand.

It’s only the third recorded instance of a live Adélie penguin – a species that makes its home on the Antarctic peninsula – making it to New Zealand. Its arrival is a reminder of the threats the birds face from warming waters, increased competition over food supplies, and changed habitats.

After observing that the penguin was not getting in the water and could be vulnerable to dogs, locals called Thomas Stracke of Christchurch Penguin Rehabilitation.

Stracke said when he arrived with a vet, he was shocked to find an Adélie penguin. “Apart from being a bit starving and severely dehydrated, he was actually not too bad, so we gave him some fluids and some fish smoothie,” Stracke said. The penguin was released into a bay on the banks peninsula, where his helpers hope he may be able to make the journey home.

“I would have preferred to get him on the Hercules [air force plane] that drops staff at Scott Base,” Stracke said, but he was told by the Department of Conservation that the idea was not feasible. “They had a meeting with the other big penguin guns and they said no.”

“When the waters warm up because the fish usually go into deeper cold waters. And so there’s no fish around,” he said.

New Zealand’s populations of yellow-eyed penguins were also struggling as they competed with fishing businesses for food and the rehabilitation centre was seeing increasing numbers of malnourished or starving penguins come in, he said, calling the situation a “nightmare”.

Otago University zoology professor Philip Seddon said Pingu’s appearance was “super rare,” and that it could have been a younger bird that strayed too far and got caught in a current that carried him into New Zealand waters.

Seddon said that while Adélie penguin populations looked to be stable at the moment – increasing in some areas and decreasing elsewhere – there were plenty of possible threats in their future, and changes in penguin behaviour could be an early warning sign that the marine ecosystem was in crisis.

“All species of penguin are like marine sentinels … when they’re doing badly, they’re giving us an early signal – canaries in coalmines – an early signal that things are not good,” he said.

Seddon said while one arrival did not make a trend, “I think if we started getting annual arrivals of Adélie penguins, we’d go actually, something’s changed in the ocean that we need to understand.”

“More studies will give us more understanding where penguins go, what they do, what the population trends are like – they’re going to tell us something about the health of that marine ecosystem in general.”

Global heating is affecting Antarctic penguin habitats in uneven and sometimes unpredictable ways: in some areas, sea ice is expanding, but in other crucial areas it’s decreasing. That can have a mixed effect on penguin populations: some loss of sea ice can actually help Adélies, allowing more viable breeding space.

But too much warming can also disrupt those habitats, or the food supplies penguins rely on: according to Nasa, in the areas of Antarctica that are experiencing warming, Adélie populations are either declining or expected to drop off in the next 40 years – and as sea ice decreases it can prompt changes in the migration patterns of the Ross Sea penguins.

At times, those changes have led to disaster: in 2017, a colony of 40,000 Adélie penguins suffered a “catastrophic breeding event” – where all but two chicks died of starvation. It was the second mass death in just four years, marking a cluster of breeding disasters not previously seen in more than 50 years of observation.

This article by Tess McClure was first published by The Guardian on 12 November 2021. Lead Image: An Adélie penguin – native to Antarctica – has been found 3,000km from home on a New Zealand beach. Photograph: Allanah Purdie/Department of Conservation.