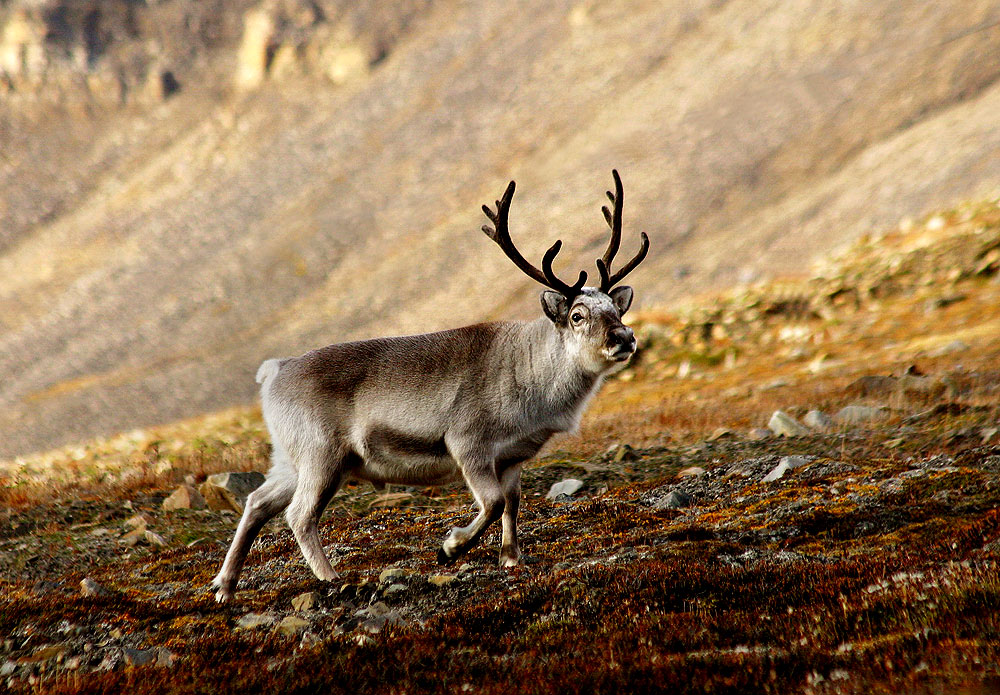 Reindeer and caribou populations have been declining dramatically over the past few decades. But one subspecies of reindeer seems to be doing better, anew study has found.

The wild Svalbard reindeer (Rangifer tarandus platyrhynchus), which lives in the harsh archipelago of Svalbard off Norway in the Arctic Ocean, was nearly hunted to extinction in the 19th and early 20th centuries. But its protection in 1925, including a ban on hunting, has helped the reindeer population bounce back, previous estimates suggest.

To find out how many Svalbard reindeer live across the archipelago today, Mathilde Le Moullec, who completed her Ph.D. from the Norwegian University of Science and Technology this year, and her colleagues systematically surveyed more than 2,000 kilometers (1,200 miles) of Svalbard between 2013 and 2016. They mostly walked, sometimes 30 to 40 kilometers (18 to 25 miles) a day, and also used a small boat to reach sites that were difficult to get to on foot.

In the end, Le Moullec’s team estimated there were about 22,000 Svalbard reindeer across the islands — a population size double that of a previous estimate based on opportunistic counts from 1968 to 2008, the researchers report.

“At a global level, the abundances of the 12 reindeer subspecies found throughout the Arctic today appear to have declined, and the species has been listed as vulnerable (i.e., about 40% decline over the past 10–30 yr) by the International Union for Conservation of Nature,” the researchers write in the paper published in The Journal of Wildlife Management. “Our study is an example of the opposite trend pattern.”

Svalbard is said to have first been sighted by Dutch navigator Willem Barents in 1596. To rebuild a picture of where the reindeers occurred before the advent of humans after the archipelago’s “discovery” in the 16th century, Le Moullec and her colleagues collected reindeer bones and antlers preserved in the cold Arctic environment, and used radiocarbon dating to estimate how old the remains were. That gave them an idea of which areas of the archipelago supported reindeer populations before they were hunted to near extinction.

“I call them my treasures,” Le Moullec said in a statement. “Walking all those kilometres, you get to places you would otherwise never go. So we started finding and collecting these ancient bones.”

Bones that were older than the first documented human presence in Svalbard occurred across all sampled regions, the researchers found, giving an indication of the reindeer’s historic distribution. The latest estimates show that the Svalbard reindeer now occupies its entire historical range across Svalbard. And areas where the reindeers were once completely wiped out by hunting have the potential to support more animals, the researchers estimated.

“Reindeer have recolonized their ancient grazing areas, based on the information we have from the antlers and bones,” Le Moullec said. “But we still see the effect of hunting from 100 years ago. In the areas where they were extirpated, their numbers still have the potential to increase.”

While Svalbard reindeers are doing better than many of their cousins, the subspecies’ recovery could be under threat from human-induced climate change. Average temperatures in Svalbard have increased at a rate of 1 degree Celsius (1.8 degrees Fahrenheit) in summer and 2.9 degree Celsius (5.2 degrees Fahrenheit) in winter every 100 years, and glaciers in Svalbard have shrunk by around 7 percent over the past 30 years, the researchers write.

It’s taken nearly a century for the subspecies to recover from over harvesting, and the reindeer’s response “may be too slow to track the speed of future climate change,” they add.

This article by Shreya Dasgupta was first published on Mongabay.com on 6 December 2019.