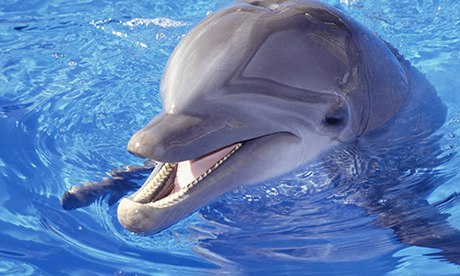 It’s the most barbarous bit of mixed messaging since the Icelandic whaler Kristjam Loftsson declared he was making his whaling operation “eco-friendly” by running his ships on – whale oil. The Japanese town of Taiji, site of the annual slaughter of thousands of cetaceans as featured in the Oscar-winning documentary The Cove, has declared its infamous bay to be a marine park, in which tourists will be encouraged to swim with dolphins – and then eat them in the cafe afterwards.

“We already use dolphins and small whales as a source of tourism in the cove where dolphin-hunting takes place,” Masaki Wada, a town official, told the Japan Times. “In the summer, swimmers can enjoy watching the mammals that are released from a partitioned-off space…This is part of Taiji’s long-term plan of making the whole town a park, where you can enjoy watching marine mammals while tasting various marine products, including whale and dolphin meat.” He almost makes it sound appealing.

But we British aren’t exactly innocent on this issue. As a boy, I blithely ate Stork margarine, unaware that I was munching on whale oil. During the 1940s, my parents’ generation were exhorted to eat whale meat by the government that issued recipes for whale burgers and whale goulash: “Add tomato ketchup to colour. Serve with macaroni or dumplings”. And during the first world war, Sir Sidney Harmer, director of the Natural History Museum, called a press conference at which journalists were served dolphin, freshly sliced from an animal which had been unfortunate to lose its way up the Thames at a time of national emergency.

Our cetacean-consumption goes even further back. Britain’s answer to Francis of Assisi, Cuthbert, the beloved nature-loving saint of the north, was saved from starvation when on a mission to the Picts by the miraculous appearance of ready-prepared cetacean flesh which he found on the beach, much as if a dark age sushi chef had been at work. Indeed, the word “porpoise” itself is a Norman French contraction of “porc poisson”, indicative of an age which sought to overcome meat-free Fridays by classifying cetaceans as fish.

But our conflicted western attitude to cetaceans is a live issue, as the recent film Blackfish, made clear. Personally, I find it astonishing that of the 45 killer whales still kept in captivity, many are held in oceanariums in Spain, France, and the Netherlands – all paid-up members of the EU. Meanwhile the Faroes, a Danish dependency, continue to slaughter pilot whales in annual culls, even though the hunters themselves are perfectly aware that the flesh is so contaminated with heavy metals that it is highly likely to cause premature dementia. It’s almost impossible to square these medieval practices in the 21st century. Or it would be, if our own government weren’t busy culling badgers in order that we can drink cheap milk.

Some might suspect a rearguard action at work; anthropomorphic guilt by association. Do these animals really deserve special treatment? Continuing reports that Scottish and Welsh bottlenose dolphins beat up and kill harbour porpoises have been followed up by Julian Gregg for a book claiming that dolphins aren’t so smart after all. Although Gregg, perhaps pained by the alacrity with which the popular press and social media swooped on this bit of apparent revisionism (and the subtextual reassertion of human hubris), has said: “I don’t think anyone who reads the book will be left thinking that dolphins are dumb”.

The almost laughably perverse proposals of the Taiji town elders only go to show how tough it is to be a dolphin in the 21st century. Everyone in the world wants to swim with you. You’ve been trained to blow up Vietcong divers and detect gulf war mines. You’ve been a TV star, at the same time as rogue 60s scientists dosed you with LSD.

This article was written by Philip Hoare for the Guardian.