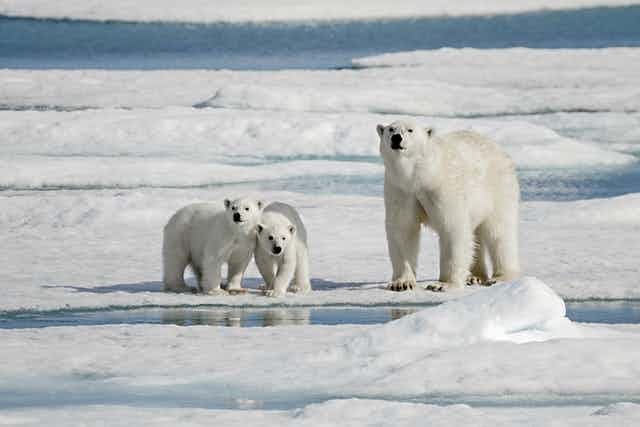 Recently, scientists in Hornsund, Svalbard – a Norwegian archipelago in the Arctic ocean – witnessed a polar bear pursuing a reindeer into the sea before killing it, dragging it ashore and eating it. The video that they captured was widely shared on news and social media platforms. Then, two days later, they saw the same […]

A drastic drop in caribou and shorebird populations is a reflection of the dire changes unfolding on the Arctic tundra, according to a new report from the Arctic Council. The terrestrial Arctic spans approximately 2.7m sq miles (7m sq km), marked by extreme cold, drought, strong winds and seasonal darkness. Species living in this environment […]

Scientists have predicted for the first time when, where and how polar bears are likely to disappear, warning that if greenhouse gas emissions stay on their current trajectory all but a few polar bear populations in the Arctic will probably be gone by 2100. By as early as 2040, it is very likely that many […]

Hunting of polar bears for their skins and trophies  must be banned or the iconic Arctic species will die out, a conservationist has warned. Not only are the animals battling to survive the impact of climate change, which is melting the ice they need to hunt on, but trophy hunters and a soaring demand for […]

Reindeer and caribou populations have been declining dramatically over the past few decades. But one subspecies of reindeer seems to be doing better, anew study has found. The wild Svalbard reindeer (Rangifer tarandus platyrhynchus), which lives in the harsh archipelago of Svalbard off Norway in the Arctic Ocean, was nearly hunted to extinction in the […]

There are only about 25,000 polar bears remaining on this planet, and we lost another one late last month. This time it wasn’t because of the lack of ice due to global warming, but it was due to yet another threat created by humans: Arctic tourism. Tragically, the polar bear lost his life for doing […]

It’s all getting a bit too busy for blogging! The end of April is always my favourite time and at the moment it is the movement of Teal and other dabbling ducks that is occupying me with the never-ending searching for something rare in their midst. Yesterday I was at Nordre Øyeren. At this time […]