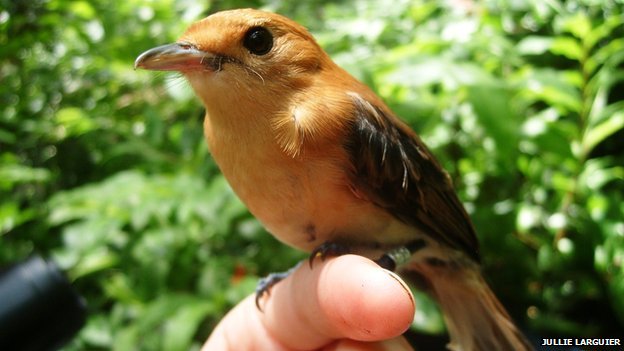 Rain, rats and fire ants threaten the survival of the rare Tahiti monarch, despite a record best year for its conservation.  Just 10 breeding pairs remain in the wild population, which numbers fewer than 50 mature birds in total.

Efforts to save the birds won an award from conservation partnership BirdLife International.  But experts warn that poor weather and predators could dramatically affect the current breeding season.

The Tahiti monarch (Pomarea nigra) is a species of monarch flycatcher that lives in four forested valleys on the island of Tahiti in French Polynesia.  Adults are black with pale blue beaks and juveniles are a red-brown colour.

Populations of the songbirds have declined throughout the 20th Century, but a local conservation programme that has been running for the past 16 years has succeeded in boosting breeding figures.

In 2013, conservationists at Manu, the Polynesian Ornithological Society, saw a record four-fold increase in chicks compared with the previous year.

Their efforts to manage the forest home of the critically endangered monarchs won the BirdLife International People’s Choice Award, voted for by the public.

The breeding season for the birds lasts from September to June and last year some were able to produce two broods. But so far this season, the birds have faced torrential tropical rains and conservationists are concerned by an encroaching colony of little fire ants.

“Eight chicks have survived the rain so far. But I am worried for the fledglings; they are so inquisitive they are not afraid of the introduced predators,” explained Caroline Blanvillain, Head of Land Birds at Manu.

Ms Blanvillain monitors the steep valleys where the Tahiti monarchs live and describes them as “friendly little birds”.  Martin Fowlie from Birdlife International identifies the bird’s behaviour as “ecologically naive”.

“They are typical of island endemic species that evolved with very few predators, if any,” he said. “They don’t see humans as potential predators as you might if you went into my garden in the UK.”

The biggest predator of the birds is the black rat, a non-native species that arrived on the island with European trade ships.

“Rats are not supposed to be on Tahiti, they arrived on boats and have killed thousands of birds,” said Ms Blanvillain.  “And now there are fire ants on the edge of the valley. If the ants reach the nest they will eat the chicks and adults in minutes.”

Little fire ants, also known as electric ants because of their stinging bite, were first discovered in Tahiti in 2004 and have since colonised large areas of the island.  The predatory ants are native to South and Central America and are considered a pest species elsewhere in the world where they disturb the native ecology.

“Alien invasive species are the second biggest threat to birds,” said Mr Fowlie.  “Across the Pacific, we know a lot of birds have gone extinct because of introduced species,” he said citing destructive animals such as pigs, through plants that provide unsuitable nest sites, down to mosquitoes that can spread alien diseases.

Manu have installed hundreds of rat trapping stations throughout the forest and recruited local school children to help plant native trees in an effort to restore the birds’ natural habitat.

“This is a bird that evolved for this particular island and this particular habitat. It’s always difficult to say what would happen if the species went extinct, we just don’t know,” said Mr Fowlie. “But it’s one part of a complex fabric of ecosystem and as you start to lose bits the whole thing can unravel. It’s important to keep everything in place.”

This article was written by Ella Davies for BBC Nature Features