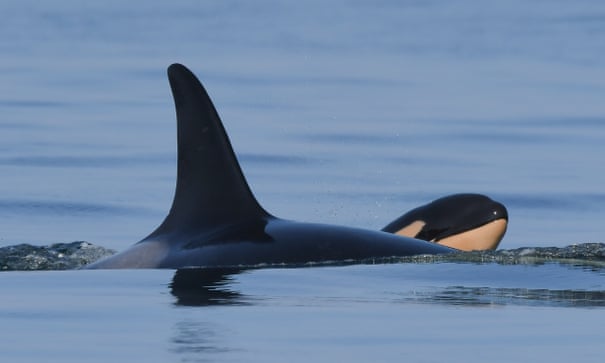 An orca who became famous around the world in 2018 when she carried her stillborn calf aloft in the water for 17 days has given birth to a healthy baby.

The not-for-profit Center for Whale Research spotted the baby, dubbed J-57, “swimming vigorously alongside its mother”, named Tahlequah, on Saturday in waters near the border between the US state of Washington and the Canadian province of British Columbia. They estimate that the calf was born on Friday.

“On September 5, we followed up on a report from one of the [local] whalewatchers that a very small calf was seen,” the whale research center reported. “Tahlequah was mostly separate from the other whales and being very evasive as she crossed the border into Canada, so we ended our encounter with her after a few minutes and wished them well on their way.”

Tahlequah gained renown in 2018 when she carried her stillborn calf for 17 days around the Salish Sea, just off Washington and British Columbia, where three orca pods live. Her behavior was widely covered in news media as evidence of grief in another species, and her story captivated the public.

“Tahlequah in particular means a great deal to me,” said wildlife photographer Alena Ebeling-Schuld, a close follower of the whales. “Her tour of grief was beyond impactful, telling the story to a wide audience not only of the plight of Southern Residents, but also of the complexity of animals’ emotions – something humans are so quick to disregard.”

Other observers have argued that describing Tahlequah as experiencing “grief” is an inappropriate anthropomorphism.

The Southern Resident whale population consists of three pods occupying the Strait of Georgia, a large inlet adjacent to Vancouver, as well as the surrounding waters. These whales have long suffered environmental stresses, particularly from a persistent lack of nutrition. They mainly feed on endangered Chinook salmon, whose populations have dwindled in recent years.

This decreased food availability directly impacts the success of whale pregnancies: a 2017 study in the journal PLOS ONE found that over two thirds of Southern Resident pregnancies failed between 2008 and 2014.

“Low availability of Chinook salmon appears to be an important stressor among these fish-eating whales as well as a significant cause of late pregnancy failure,” reported the study, conducted by researchers from a number of conservation centers. “Results point to the importance of promoting Chinook salmon recovery to enhance population growth of Southern Resident killer whales.”

The challenges facing the Southern Resident population indicate a difficult road ahead for Tahlequah’s new calf. While a successful birth is a positive development for the pod, researchers have found a high fatality rate among newborns.

“Regrettably, with the whales having so much nutritional stress in recent years, a large percentage of pregnancies fail, and there is about a 40% mortality for young calves,” the Center for Whale Research noted on Sunday. “We hope this calf is a success story.”

Tahlequah’s pregnancy was first reported several weeks ago by the nonprofit conservation group Sealife Response, Rehabilitation, and Research, also known as SR3. Researcher Dr. Holly Fearnbach has led efforts to monitor the Southern Residents from above via drone camera, and was able to deduce a number of whales’ pregnancies by comparing aerial photos of them over time. Tahlequah was one of these whales.

“Obvious shape changes in some individuals have revealed a number of pregnant whales from all three pods,” SR3 reported on July 26. “We hope folks on the water can give the Southern Residents plenty of space to forage at this important time. With such a small population… every successful birth is hugely important for recovery.”

There’s no way to predict how Tahlequah and her new calf will fare in coming months. But whale enthusiasts remain deeply moved.

“This new birth brings new hope – for Tahlequah and for all of us,” said Ebeling-Schuld. “I am wishing Tahlequah and her new little one the very best with all of my being.”

This article was first published by The Guardian on 7 September 2020. Lead Image: The new orca calf, J57, with its mother, J35. Photograph: Katie Jones/Center for Whale Research / Permit #21238 / WhaleResearch.com.