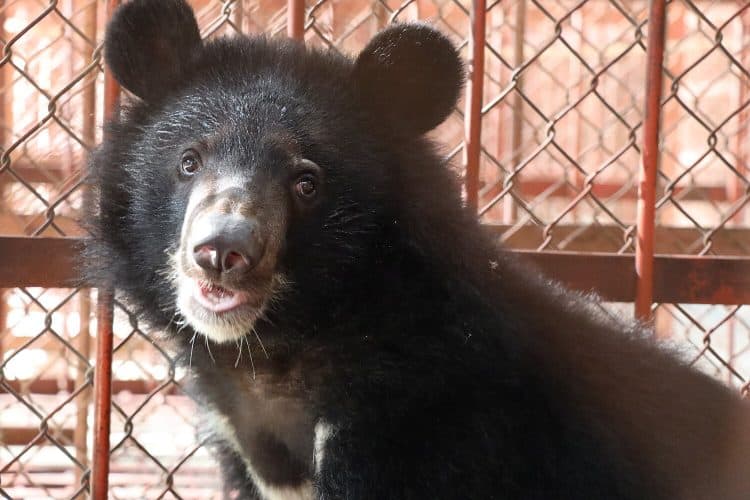 According to a release from the nonprofit, Animals Asia received a call from the Uong Bi police officers from the Quang Ninh province of Vietnam on Nov. 8 about the bear cub.

Before the call, the authorities confiscated the cub from an illegal wildlife trafficker and brought it to a local station. Officers found the cub living in a birdcage barely bigger than the bear’s body.

Animals Asia provided support over the phone to help the police officers care for the cub until the nonprofit could arrange the logistics to move the bear to their sanctuary. Once everything was in place, the bear took a four-hour trip from Uong Bi to Tam Dao to reach his new sanctuary home.

The cub arrived stressed and scared, a typical reaction for young bears ripped from the wild, according to Animals Asia. The nonprofit decided to name the cub Yên, meaning “peace” in Vietnamese.

Animals Asia hopes to make things more peaceful for Yên, who has undergone his initial health screening and is now in quarantine, settling into his new home before moving onto the sanctuary’s grounds.

Since the cub is still shaken from his harrowing journey, Animals Asia bear care team members are taking turns sitting with the bear and have provided the baby animal with a giant teddy bear for additional comfort.

Yên is the 650th bear that Animals Asia has helped save from a bleak world of bile farming and wildlife trafficking.

“We are grateful for the swift and decisive actions of the Uong Bi police force, which display their continued diligence and determination to keep the province free of illegal bear farming,” Tuan Bendixsen, Animals Asia’s Vietnam director, said in a statement.

Yên’s arrival brings the total number of bears being cared for at Animals Asia’s Vietnam Bear Rescue Centre in Tam Dao to 188 — 95% of the facility’s capacity. Animals Asia is currently building another sanctuary so they can keep offering rescue bears a better life. The new facility will be in Bach Ma National Park in central Vietnam.