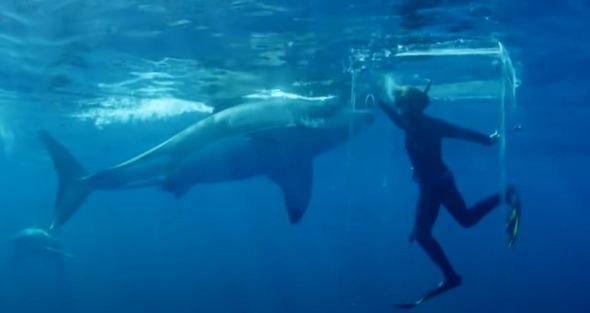 FOOTAGE of a man desperately fighting off sharks from entering his diving cage after the lock broke resurfaced online in a terrifying video that nearly cost the diver his life.

A diver was forced to fight off a shark who tried to break into his cage after the lock on the door broke, forcing him to hold it in place.

At one point, the diver, appeared to be called Dickie, was forced to push a shark away from the cage after it began biting at the door to get to him.

The scary event, filmed off the west coast of Mexico, nearly went badly wrong for the diver and was left fending for his life during the nail-biting event.

The diver, equipped with little more than a mask and a wetsuit, was lowered into the water in a transparent plexiglass box to film the sharks around his boat.

But things quickly went wrong after Dickie found the lock to his cage was not working and so was forced to hold it in place to prevent the predators from entering.

He told his fellow divers: “Guys the door is open, I’m going to have to keep it closed by hand.”

The team then create a makeshift door lock to hold the door in place so Dickie can be kept safe.

But as Dickie reinforced the door, one shark charged towards the cage with the footage showing it trying to get to the diver.

Using a gap in the cage, Dickie grabbed the shark and forcefully pushed it away from the cage so he could fasten the door.

Over the footage, radio chatter could be heard with one of the team shouting: ”They’re trying to get in, Dickie just pushed a shark out of the cage.

“It looks like it’s trying to get in through the door.”

Another colleague yelled: “That was f***g insane.

“There was like five, six, seven sharks, one sticks its nose straight into the cage and Dickie managed to turn in time and push it out. It was super-sketchy.”

At the beginning of the extended video, a diver described the situation before heading into the water.

One explained the sharks are only interested in their own self-preservation and expected the smaller sharks to flee once the Great Whites arrive.

Another in the water could be heard on the radio calling the situation a “totally different ball game” as the Great Whites appeared “very interested” in the team.

This article by Kyle Farrell was first published by The Express on 29 October 2021. Lead Image: The predators repeatedly slammed into the cage to get to the diver (Image: Discovery UK).