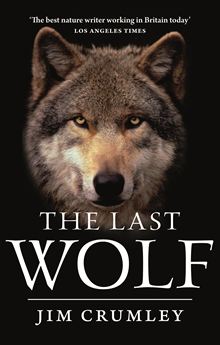 I read a lot, both fictional and non-fictional books and have done since I was very young. I enjoy it and at the same time I learn, expanding my mind and my knowledge. So, why I ask myself, have I never written about books? I have never reviewed a book on paper, not counting middle school English tasks to review the class read. So here it is…

Jim Crumley is a British nature writer with over twenty five books under his belt along with radio and television programmes. Examples of his work include ‘The Great Wood’, the most recent and ‘A High and Lonely Place’ being one to tightly bind Crumley with the natural world and the Cairngorms since 1990. ‘The Last Wolf’ published in 2009 is a case for the wolf in Scotland and is the book I have recently finished.

The first half of the book consists of historical quotations, folk stories and old legends based around the wolf, it is a trawl for ‘the Last Wolf’ to be hunted and killed by man in Scotland. Legend has it; the last wolf was killed by MacQueen in 1743 at Findhorn. Crumley disregards this vehemently for multiple reasons, one being an account which stated the wolf killed was a black beast. There were no black wolves in Europe – so it couldn’t possibly have been true, not one word. I feel Crumley is biased throughout, and so determinedly aims to clear the wolf of terrible deeds he jumps to conclusions. It may have simply been an exaggeration on the truth; I don’t think it warrants a complete write off. Of course I don’t agree with all the extracts Crumley digs up from the past, I’m sure there were no rabid droves of wolves roaming the land, just as I’m sure they didn’t kill children and mothers every dark winter night.

Frustratingly, the continuous negative argument over folk tales and historical content is tiring and deters from the fact you’re reading about the wolf. In his aim to make the wolf a positive creature by clearing its hated name, Crumley creates a dismal foray into mans hunt of the species, while disputing almost every word quoted authors made. It has to be said though, that the research into the demise of the wolf was detailed and intriguing.

Thankfully, the second half of the book focuses on the possibility of bringing the wolf back, again a one sided opinion; that, without doubt wolves should roam Scotland. But, this section is good, I think it clears the name of the wolf and brings a much more positive aspect to the book than the historical disproving managed. The author recounts a visit to Norway, and talk of the wolf howl.

“You can feel how your whole body is looking for where this wolf is. It’s a very special feeling. It’s the voice of the wild.”

Gaire, a wildlife filmmaker, describing what the sound of a wolf howl meant to him.

Then, Yellowstone. This chapter highlights all the good wolves bring to an ecosystem which lost them a long time since. It describes the alteration in behaviour of prey species, how they remember age old instincts and how this brings about complete regeneration. It tells of 293F, a special wolf, a pioneering wolf. She was killed on a road 500 miles from Yellowstone. She would have been the first wolf to walk in Colorado since the mid-nineteenth century, and she got there alone.

Crumley then talks of Rannoch Moor, here in the UK, a place for wolves to belong? Interspersed among these chapters are those of a lone wolf, she who escaped a hunt, along without her pack. These sections are beautifully written, able to make a shiver run down a spine.

“She moved again in the dusk, away from the memory of trees into a land as treeless as oceans. In another hour she walked side by side with her own moonshadow, with nature at its most accommodating, for what was she but a mobile fragment of the one true wilderness where she walked?”

For these chapters alone the book is worth a read, they encourage imaginative thoughts of old days when a lone wolf may have padded across a Scottish moor. Simply bear in mind, folk lore is folk lore and can often be neither accepted nor disproved. Also bear in mind, that despite wolves belonging here, roaming our moorland and forest, pushing deer to remember instinct, things have changed a great deal. It is not as simple as we would like it to be. Maybe one day wolves will be back, but unfortunately we’ll never let them reclaim land as they ought, without our control and input. Therefore, maybe the dream wouldn’t work; maybe man would again be the wolves’ downfall, through red tape, radio collars, fencing and all those other intricacies brought with reintroduction during the 21st century. Wouldn’t it be a dream to be back living close to nature, with wolves howling through the night? Yes, of course it would. If only…

Rachel, welcome back to our blog – highly interesting review about this iconic species – this book is well worth a read!