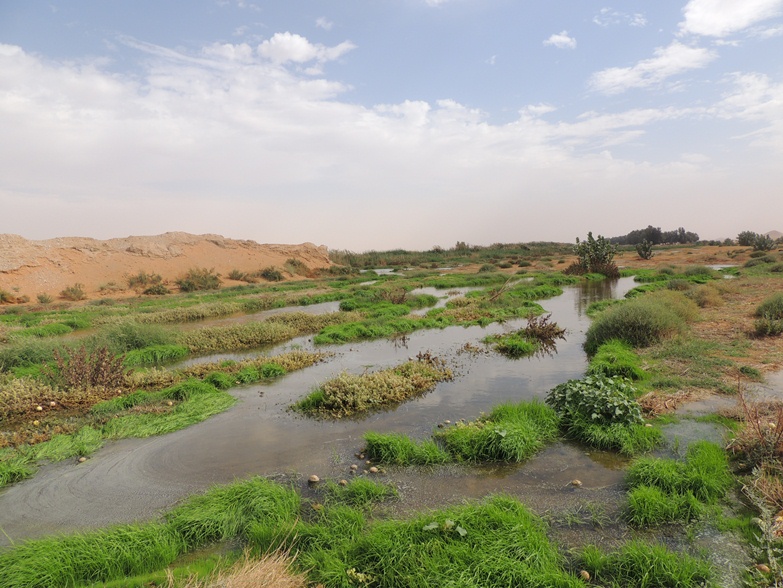 In the late 1990s Tom Tarrant was birding the Riyadh area and he kept good records which I often compare against today’s findings. He has written about “the blue lagoons”. This was part of the Riyadh river where the habitat is more open than the area around the pivot fields where I normally bird. He also said the location was suppressed for a couple of reasons. Anyway, I decided from his writing it must be much further south than pivot fields. I didn’t know how to get there by car or even if it is still possible so I foolishly (?) decided to walk along the west bank.

To cut a long story short, the river valley does indeed change further south. The reed banks recede and the habitat changes. There is some interesting low lying wetland and the bird life is more than a little different too.

However I couldn’t resist the temptation to bird around the pivot fields for an hour before I set out on my marathon walk. A few minor points of interest were seen here. The northern lapwing flock is now as large as last winter. There must be around 100 birds in total. An avadavat flock was seen again. I seem to be able to spot them more easily in winter. There were noticeably more marsh harrier around.

After these few observations,I began the walk. For the first hour and a quarter the habitat looks the same as near the pivot fields. Then gradually the caster plant beds recede and sedge and other reeds start to dominate.

Moorhen are an ever present whatever the vegetation. Otherwise the cross section of birds seen was quite a bit different to a normal weekend in winter around the pivot fields area.

The first sign that things might be a bit unusual was a sighting of a great white egret as well as the more usual purple heron, grey heron and a single little egret.

As I ventured further south, I could see why there are called the blue lagoons. In the places where there is no vegetation next to the river, some sort of refraction effect from the orange sand makes the water look blue. This area took over two hours to reach on foot but of course I was birding on the way so the distance is probably no more than 5 kilometres.

As I walked I was continually flushing green sandpiper and common snipe until I became more careful.

Here is where it became really interesting. At one point I accidentally flushed about 8 common snipe almost simultaneously. The last one to rise and a bit behind the others was larger and had a patterned belly. I am sure it was a great snipe. I am ruling out staining as the pattern was right and the flight was also straighter and lower than the other snipe.

This is a rare find in Saudi Arabia though Jem in Dammam saw one in late October last year.

The “Birds of Middle East” doesn’t show it in KSA but does for southern Oman. My argument is that they can’t get there from the north in winter by teleportation!

Incidentally, Mansur al Fahad and I returned to the same place on Friday. A hunters gun disturbed groups of snipe on two occasions. On the first occasion, a group of four contained a great snipe which Mansur also sawand confirmed. We were too slow with the cameras.

To add to the feeling of difference, in among a very large number of white wagtail were a small number of citrine wagtail.

This is another bird which isn’t supposed to winter here but which I saw in January in Kharj last year at a farm and again on Thursday.

It got better still. There was a water pipit!

I had seen one last year at the pivot fields on December 15th but this is the first time I had a good view and a chance of a photo. I had to check that it wasn’t similar buff bellied pipit but the strong supercilium and grey head and back are conclusive. There aren’t too many water pipit in the middle of the Arabian desert!

That wasn’t the end of the unusual findings either. The big birds of prey were mostly steppe eagle but I also observed my first short toed eagle in KSA.Unfortunately I didn’t get a photo but I know this bird very well not least because it breeds next to my Bulgarian village and i see it virtually every time I go home in summer.

The “Birds of the Middle East” says that the Arabian birds may be resident.I checked and Pers Bertilsson has a record of one in January near Riyadh. Its always more comforting to have another record confirmed in the same area if you don’t get a photo.

This was the second addition to my Saudi list on the same day. I have now seen 247 species here. I think I have a chance to over take Pers’ record of 336 species although a couple of other people could also overtake it.

It will require lots of visits to the Jizan area and also a prolonged stay in KSA. It’s this last factor which limits many birders’ lists. In the long run it will probably be a local like Mansur al Fahad who posts the highest score and good luck to him!

One of the last birds i saw on the way back to the parked car was a streaked weaver. I nearly missed it because in mid winter they look much more sparrow like. It made me think that is probably the reason why their numbers appear so low at this time of the year. They don’t get a second look because “its just another sparrow”.