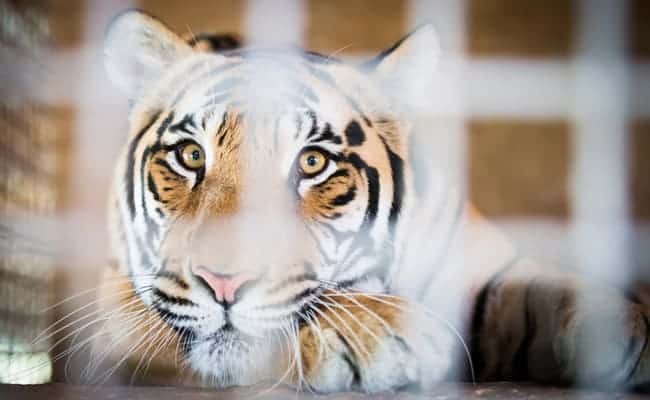 It was cause for major celebration when Ringling Bros. Barnum & Bailey Circus finally held its last show this spring, but even though the circus has officially shut down, its big cats didn’t get to retire with it.

Over the summer news broke that Feld Entertainment, which owns Ringling, applied for a permit to export the circus’ big cats, who are owned by Alexander Lacey, to Europe. In order to be granted a permit like that, the applicant has to show that the move is “for the purpose of enhancement of the survival of the species.” Despite the fact that they would continue to be used as performers, which does nothing for their species, the permit was granted in August.

Unfortunately, the controversial move started with the death of Suzy, a six-year-old tiger who escaped in Georgia while the big cats were being transported and was tragically killed by law enforcement officials. She was dead before anyone even knew she was missing.

Now, new footage released by Animal Defenders International (ADI) that shows the fate of the rest of Lacey’s big cats has reignited calls to end the use of wild animals in circuses.

The footage was taken at a circus in France, where they’ll be until mid-November, before they head to Germany. It shows them being used in performances, and the sad lives they’re confined to when they’re not being used to entertain audiences.

“The plight of these animals symbolizes everything that is wrong with the use of animals in traveling circuses. They are forced to live in cages on the backs of trucks and shunted from one country to another. The lives of these animals are miserable and, as we saw tragically in Georgia, the public and the animals themselves are put at risk. 40 countries have taken steps to outlaw this, but we urgently need more countries to act to end circus suffering,” said Tim Phillips, President of ADI.

Sadly, the latest footage adds to a long list of problems and instances of cruelty documented by ADI over the years, that range from abusing and chaining elephants and confining animals on long journeys to abusing tigers and hiding an injured lioness from inspectors.

Fortunately, the public has continued to turn away from this type of exploitation. Dozens of nations around the world have banned the use of wild animals in performances, while others are considering doing so, yet there is still a way to go.

You can help big cats like these, and other wild animals being exploited for entertainment, by signing and sharing the petitions calling on leaders in the U.S. and in the UK to end the use of wild animals in circuses for good.

For more on how to help, check out Stop Circus Suffering.

Ringling Bros could never be decent human beings! Sickening greed from animal cruelty is imprinted on their genes. They deceived the USA but found fertile ground for their evil in Europe! Shame on Europe for being complicit in this abhorrence!

big cats belong in thevwild, not in circuses

I want to help him. Doesn’t anyone hear a cry?

WICKED. Its a disgrace !

No Brainer their should not be any animals performing in circuses

Just like Sea World, when will it be closed for good?

I do not see any place to sign on this site?

This is terrible news – the sneaky RinglingBros makes the public think they have stopped using big cats, elephants and other animals in their circus acts but now we find they have sold them out be used in the circus’s in France and Germany – this really stinks – the poor animals don’t stand a chance against the greedy Ringling Bros and the people in other countries who still think Animal abuse is OK – shame on all of them – I hope they all go bankrupt and that people realize the torture these animals are put through to get… Read more »