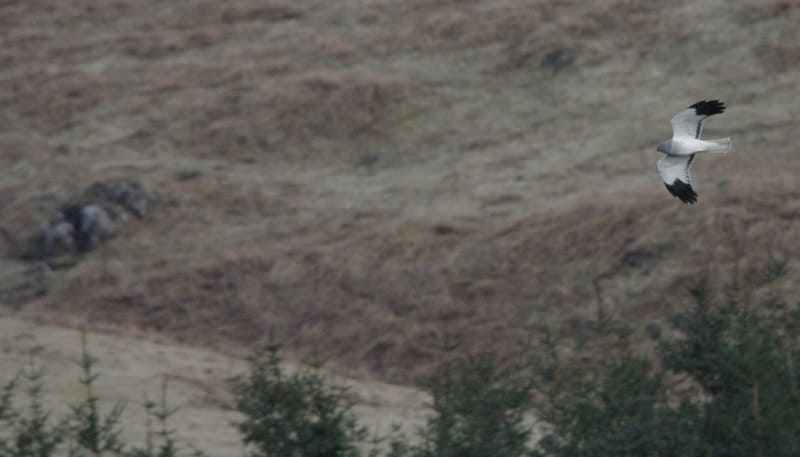 Another nice morning spent on Mull’s moors as the high pressure continued for the rest of the week. A pair of Hen Harriers were quartering the rough grass tracking each others every move like they were attached with a piece of string. Both birds broke out into their high pitched squeaky display call and the female got in position on a tightly grazed patch of grass with the male joining her as copulation took place. After mating, the male bird circled and lifted higher and higher drifting over my head as its pale grey plumage blended in with the skies giving me the views of a vole!

The following morning I was itching for more action so hunkered down on the moors and staked it out for a spell. Two Harriers appeared and presumably it was the same pair that I had watched the day previous. The female did a short display flight but nowhere near as impressive as the males sky dancing the week before. A similar pattern unfolded with display calling followed by copulation and the male bird lifting high in the sky out of view. I scoped another male bird on a distant moor as their stunning pale plumage is the most standout thing on this bland environment. It kept dropping down into patches of heather but not in a hunting mode striking for prey. Other species catching my eye on the moor were the pale rumps of red deer in large number.

I headed out to a different uplands site on the third morning and I drew a blank in terms of Harrier sightings. Even with healthy numbers of Harriers on Mull, I think there is still room for more pairs, but available prey would dictate that. Every failed attempt to see Harriers on Mull brings back memories of my Geltsdale days when sometimes I feel like I am chasing rainbows up on the moors wondering why there is no Harriers here with perfect habitat and plenty of food. The obvious and simple reason is illegal persecution by countryside criminals.

I bumped into a retired resident estate farmer on the fells and he was very friendly and as always I am keen to get other peoples views on certain topics regarding the conflict with British predators to try and learn from it. After speaking to a number of the long term residents on the isle over the years it seems that their opinions are very similar regarding birds of prey and in particular the White-tailed Eagle. He referred to them as ‘introduced vermin’ and said his family comes from a generation of gamekeepers and the reintroduction of the White-tailed Eagle to Scotland was an insult to their hard work in removing them all.

He admired the elegance and beauty of the Golden Eagle just as other locals have said the same after insulting the Sea Eagles. He quoted that he feels fortunate to have been on Mull during the ‘glory days’ when there was no WT Eagles and the large increase of people that come with them. He also mentioned in frustration the number of grazing geese and rabbits on the isle, part of an eagles diet. He confessed that he just didn’t like WT Eagles and I confessed to him that I was an eagle fanatic.

This mentality towards birds of prey is similar in a minority of people all over Great Britain but the difference is here that the birds are shielded and protected by the large number of tourists coming to enjoy the raptors and the large value attached to them with cash registers singing to the tune of 5-6 million a year to the economy because of resident eagles.

The main talking point on the isle this week is regarding the 30 foot Sperm whale which seems to be struggling in the shallow waters of Oban harbour. It has been there for over 7 days as its chances of survival decrease all the time. It reminds me of the chances of breeding Harriers, Peregrines and Eagles on the mainland on and around Grouse moors, very slim, with that little bit of hope to keep us all going.