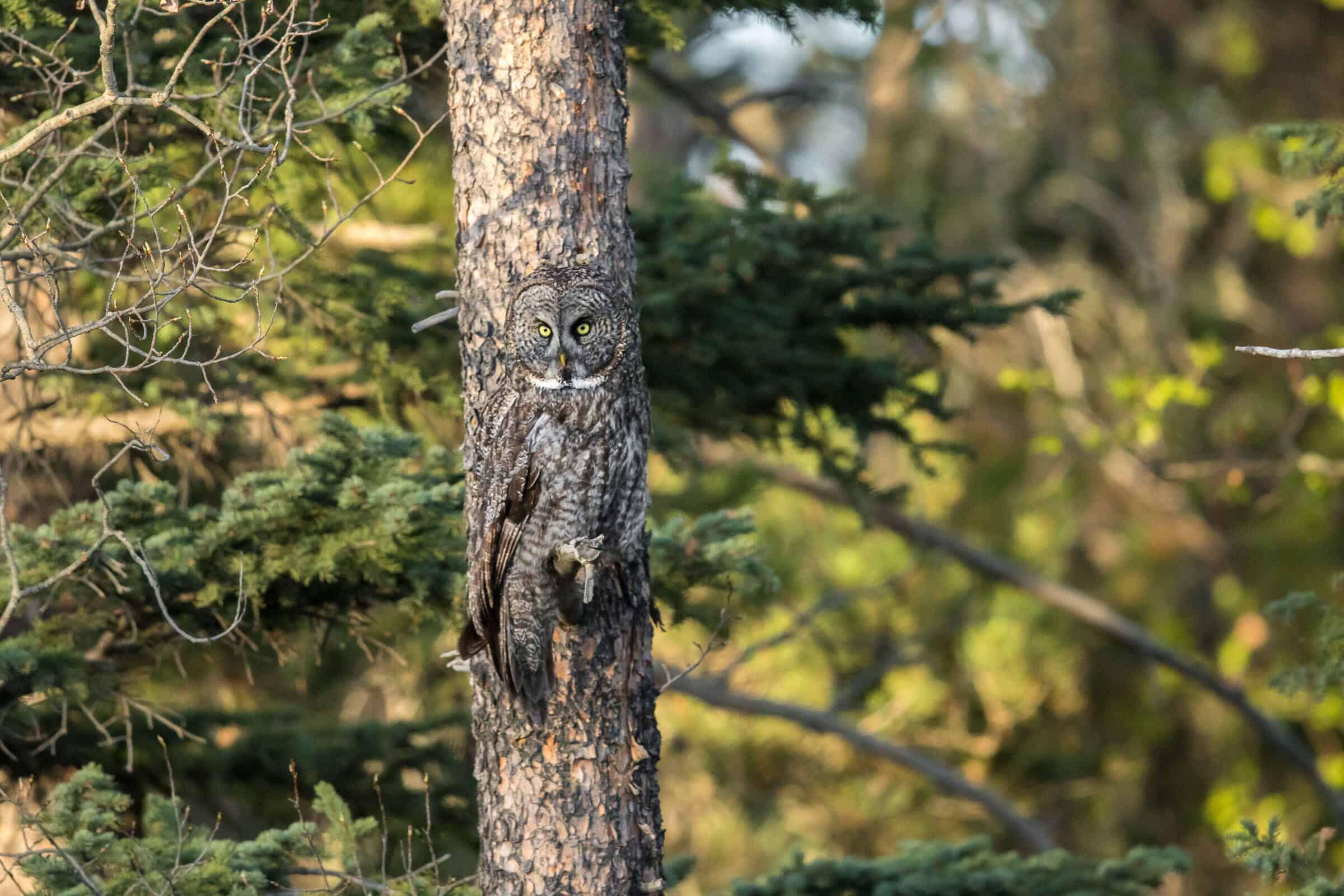 Whether they are the hunter or the hunted, a bird’s camouflage is vital to survival. For raptors and other predators, blending in is key to surprising their prey.

Meanwhile, for birds that don’t want to become someone else’s meal, the less conspicious you are, the better.

Camouflage is also important for many nesting birds, who sit vulnerable on nests for long periods of time.

Of course, there are exceptions, like Blue Jays, birds that would rather use their plumage to find mates than hide from predators. But for the most part,camouflage is a common trait across species, and as these examples show, it can be as diverse as the avian world itself.

A mysterious denizen of far northern climes and the Mountain West, the Great Gray Owl is one of our largest owls and cuts an imposing figure—much of which is feathery fluff. It’s hard to believe such a large bird could simply disappear, but if the owl in the photo above closed its huge eyes, you wouldn’t even know it was there, nor would any unsuspecting voles or rabbits below.

The Great Potoo’s camouflage is so effective that this nocturnal neotropical bird can sleep while perched out in the open during daylight hours. Yes, this potoo is probably asleep.But when it’s tough to tell where the bark ends and bird begins, predators tend to miss you. Don’t be deceived by this image, though: When awake, these birds transform into big-mouthed, bug-eyed muppets, securing their birb status.

The Willow Ptarmigan lives across the northern hemisphere’s upper reaches, from Mongolia to Finland on to Canada and Alaska, where it is the state bird. This tundra grouse takes on two different camo patterns during the year: marbled brown or gray during summer, and stark white during winter, when only the bird’s black eyes and beak stand out from the snow. Fun fact: In winter, these birds also grow built-in snowshoes.

There’s a bird somewhere in this photo. You may just have to take a minute to find it. Rose-ringed Parakeets originally hail from the verdant landscapes of southern Asia and central Africa, but since escaping as pets, they have established feral colonies in places like the UK and Japan. Wherever they wind up, the Rose-ringed Parakeet’s lime-green plumage makes them tough to spot in any leafy tree.

Although these birds are constantly on the move, Brown Creepers so perfectly match the bark they meticously scour for bugs that even perceptive birders can easily miss them. From their deceptive feathers to their long, hooked beaks and strong feet, everything about these small birds has evolved for a life clinging to the sides of trees.And when it’s time to build a nest, they simply tuck theirs behind a loose piece of bark.

Bitterns are notoriously elusive, hiding deep in dense, marshy habitats. As such, they’ve evolved aesthetic and behavioral forms o fcamouflage. This American Bittern is showing off both as it extends its head upward while revealing neck and breast stripes that mimic the surrounding reeds. Adding to the ruse, the birds will sway with the breeze or remain completely motionless, making them all but invisible. Their odd call, however, gives them away.

These cute khaki-colored birds can be found on shores throughout the north eastern U.S. and Canada. As with other shorebirds, Piping Plovers feature muted colors suited to their sandy beach environment. Unfortunately, camo hasn’t protected these birds from habitat loss.In 1986, there were only 790 breeding pairs on the Atlantic coast, but thanks to conservation efforts, the birds hit a new all-time high in 2019.

Like most owls, the Western Screech-Owl is nocturnal, which is why this one is sleeping snugly in a tree cavity during daylight hours. Most often these cavities are holes carved out and left behind by woodpeckers, but they aren’t always limited to trees; telephone poles and cactuses can also provide nesting space for Western Screech-Owls. Clearly, though, bark is where the the bird’s perfectly mottled plumage works best.

Before you think, What camouflage?, note that this photo contains two European Goldfinches. Look toward the bottom right, where the bright red facial feathers of the male peek through the thistle. Found throughout woodlands and open fields in Europe and parts of the Middle East, these goldfinches prefer to feast on thistle seeds—so much so that splotches of brown and pink help the birds blend into the bush.

Hunkered down in Alaska’s Arctic National Wildlife Refuge, this female Common Eider blends in with the coastal grasses and dirt surrounding her nest. While females sport brown, striped plumage to remain discreet, males have a bold, contrasting coat of white and black during breeding season to attract mates. Eider down is known for its warmth, and as seen above, the birds use lots of it to keep their nest warm.

Slightly bigger than a Blue Jay, the American Kestrel is the smallest of North America’s falcons. It’s also seeing troubling declines. Looking painted on,their markings serve multiple purposes, helping them to blend into their nesting cavities, as above, or while hunting in open fields, where they sometimes remain on the same perch for hours. Kestrel prey includes everything from small birds to amphibians and insects.

Woodcocks may look odd, but their strange proportions serve a distinct purpose: Those long beaks allow them to probe the ground for earthworms and small insects, and their big, set-back eyes let them spot potential predators while foraging. American and Eurasian Woodcocks, like this one above, both wear mottled plumages of varying shades of brown that help them seemingly vanish against the leaf-littered forest floor.

Native to dry, desertous parts of Asia and Africa, the sandgrouse is as close as birds get to being like camels—males can retain water for their chicks in their belly feathers. To access the liquid, the chicks use their beaks to wring out his plumage. Eventually this chick will have the striated pattern of its parents, but at first, sandgrouse chicks are born with a quilt-like camouflage that helps them blend in with the rocky ground.

Like its American Cousin, the Great Bittern spends much of its life in reedy marshland throughout most of Europe. Stealthy birds that mostly appear at dawn and dusk, they also share similar tactics for hiding as the American Bittern. Their call, though, is even stranger—think the sound one makes when blowing into a glass bottle, but amplified and booming. Yeah, something like that.

Feasting on small rodents, snakes, skunks—anything small and weak enough to kill, really—the Great Horned Owl is not a picky eater. These hunting abilities have earned it the nickname the“tiger owl.”And like that prolific predator, the Great Horned Owl’s camouflage is incredibly effective. Sometimes,though, the raptor can get a little too eager and try to nab a porcupine, only for the attempt to end disastrously for both.

Everyone’s favorite flightless parrot, the Kākāpō’s green plumage helps it survive on New Zealand’s lush forest floors. But when British colonizers brought over invasive species like ferrets, stoats, and cats in the 19th century, the chunky bird hardly stood a chance. Fortunately, thanks to the help of the Kākāpō’ Recovery Project, the birds saw their best breeding season ever in 2019, and the wild population now totals 213 birds.

Found from southern Texas to southern South America, Common Pauraques are members of the nightjar family, along with whip-poor-wills and Chuck-will’s-widows. All these birds are nocturnal, so during the day, they rest motionless amid brush on the ground or the branch of a tree, where their complex camouflage makes them virtually impossible to find.