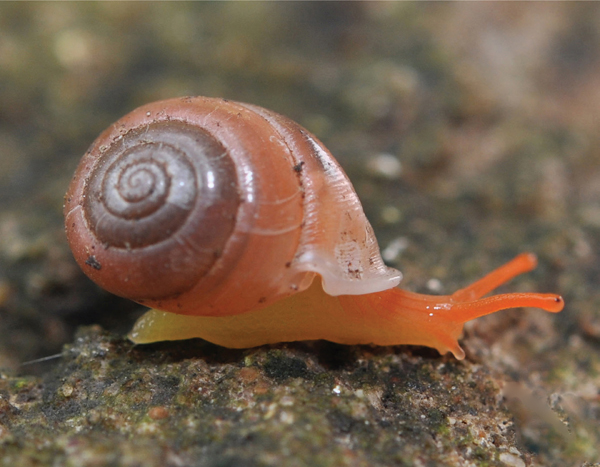 Scientists from Chulalongkorn University, Bangkok and the Natural History Museum, London recently discovered three new species of carnivorous snails in northern Thailand. However, the celebration of these discoveries is tainted by the fact that the new snails are already threatened with extinction due to the destruction of their limestone habitat.

The new snail species named Perrottetia aquilonaria, P. dermapyrrhosa and P. phuphamanesis were collected during surveys throughout Thailand between 2008 and 2012 and are described in the open access journal Zookeys. Identified by their genital organs and shell characteristics, these are the first snails in their genus Perrottetia to be described in over a century.

The snails belong to the family Streptaxidae which is a terrestrial carnivorous group of snails known to feed on insect larvae, earthworms, and even other snails. These tiny snails less than 1 centimeter in size are found living within rock crevices, endemic to a single or few limestone mountain ranges in north and north-eastern Thailand, adopting a “one hill one species” endemism.

Members of the Streptaxidae family can be recognized by their cylindrical shells, bright yellow to red or orange colored bodies and external hook-like structures on their penis. Close anatomical examination of these snails during the study identified them as new species.

Differences in there anatomy is noted in the journal. For Example, “P. aquilonaria has a club shaped distal penis and large penial hooks are present and penial papillae cover almost the entire penial hook portion.” Whilst P. dermapyrrhosa is described as having “a long genital atrium and the penial sheath is about two thirds of the penis length. Penial hook are long, scattered and sunken into deep ovate hollows; vaginal hook are present.” Meanwhile, P. phuphamanensis is described as having “rounded and protruded shell periphery”.

The discovery of these snails, surviving in such harsh conditions, shows us that “there are still remnants of some fundamental ecosystem” in these overly exploited areas, according to the paper.

Somsak also points out “More than 50% of limestone ecosystems in this region have been or still are being destroyed. This astonishing case of biodiversity persistence gives a valuable reason to put effort in the conservation of this important world ecosystem. ” These new species are immediately faced with the threat of extinction unless something can be done to protect their rapidly vanishing ecosystem.