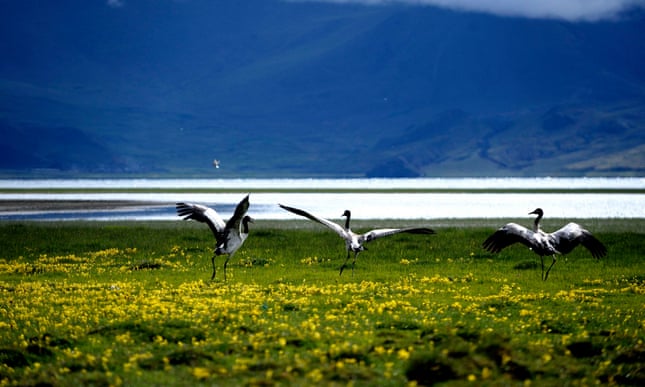 A hydroelectric project in India’s eastern Himalayas will soon destroy one of the winter habitats of the magnificent Tibetan crane, a vulnerable bird regarded by local Buddhists as the reincarnation of a the sixth Dalai Lama, scientists and environmentalists have warned.

The Tibetan, or black-necked crane, a species unique to Asia, has already disappeared from Vietnam, and can now be sighted only in parts of China, India and Bhutan, besides its main breeding grounds on the Tibetan plateau. It is listed as vulnerable on the International Union for Conservation of Nature’s Red List.

Now, however, its existence is expected to become even more perilous. Despite protests from indigenous Monpa people and conservationists, Delhi is going ahead with the construction of the 780MW Nyamjang Chhu hydroelectric project that it is feared will destroy the migration site of the black-necked cranes.

A dozen other hydroelectric projects are also planned in the region, part of a massive plan to generate electricity from Himalayan rivers to meet India’s rising energy requirements.

“The hydroelectric projects will totally destroy natural habitats in the region,” said Asad Rahmani, scientific adviser of the Bombay Natural History Society. “When planning such projects, we’re not paying attention to their impact on local culture. The electricity is for people like us in the cities, but all the damage is suffered by the local people.”

Every winter, eight black-necked cranes migrate from Tibet to the flood plains of the Nyamjang Chhu river in the Tawang district of India’s north-eastern Arunachal Pradesh state. The arrival of the birds is awaited with great anticipation and anxiety by the indigenous Monpa tribe, a 45,000-strong Buddhist community congregated around the famous Tawang Buddhist monastery.

“Whenever the Monpas sight these birds, they take it as a sign of good fortune and prosperity,” said WWF-India’s Pankaj Chandan, an expert on the black-necked crane. “If the birds don’t come, they fear a catastrophe. You will find the birds depicted in paintings in several monasteries in the region.”

Tsangyang Gyatso, the colourful sixth Dalai Lama, was a Monpa by ethnicity and was born close to the Tawang monastery. He was abducted from Lhasa by the Chinese emperor in 1706, but while leaving Tibet he is said to have composed a poem that led to the Monpa legend about the black-necked crane. “White crane, lend me your wings. I will not fly far. From Lithang [in China] I shall return.”

This article was first published by The Guardian on 27 Aug 2015.