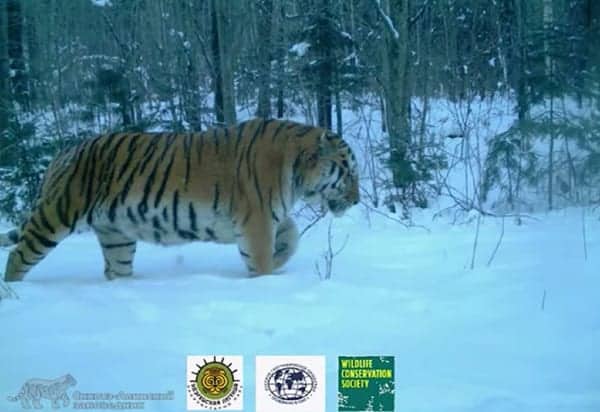 In a frigid Russian forest, a camera trap snapped 21 family photos over two minutes. This wasn’t a usual family, though, this was a tiger family, more specifically an Amur tiger (Panthera tigris altaica) family.

And this wasn’t even a usual tiger family: the cameras showed a dad leading the way. Generally, tiger male are not known for being paternal and are almost always loners.

Indeed, this is the first time scientists have ever documented a father Amur tiger hanging out with the mother and kids.

“Although…George Schaller documented sporadic familial groups of Bengal tigers as early as the 1960s, this is the first time such behavior has been photographed for Amur tigers in the wild. These photos provide a small vignette of social interactions of Amur tigers, and provide an evocative snapshot of life in the wild for these magnificent animals,” said Dale Miquelle, the Russia Director of the Wildlife Conservation Society (WCS).

The photos were released by the Sikhote-Alin Biosphere Reserve and Udegeiskaya Legenda National Park along with WCS, which works closely with Amur tigers, also known as Siberian tigers.

“We have collected hundreds of photos of tigers over the years, but this is the first time we have recorded a family together. These images confirm that male Amur tigers do participate in family life, at least occasionally, and we were lucky enough to capture one such moment,” said Svetlana Soutyrina, who set the camera trap that took the remarkable family photo. Soutyrina is the Deputy Director for Scientific Programs at the Sikhote-Alin Biosphere Reserve.

In the mid-Twentieth Century, Amur tigers had a close brush with extinction which nearly put them in the same category as the Javan tiger, the Bali tiger, and the Caspian tiger—all gone. In the 1940s only around 20 Amur tigers survived in the wild. Then conservationists jump in with a aggressive plans to save the species and it worked. By 2005, scientists estimated 430-500 tigers roaming the Russian Far East forests with some even showing up in neighboring China. Last month, a slew of tiger experts conducted another decadal survey to see how the population is faring and will announce their findings this summer.

This article was first published by Mongabay.com on 10 Mar 2015.