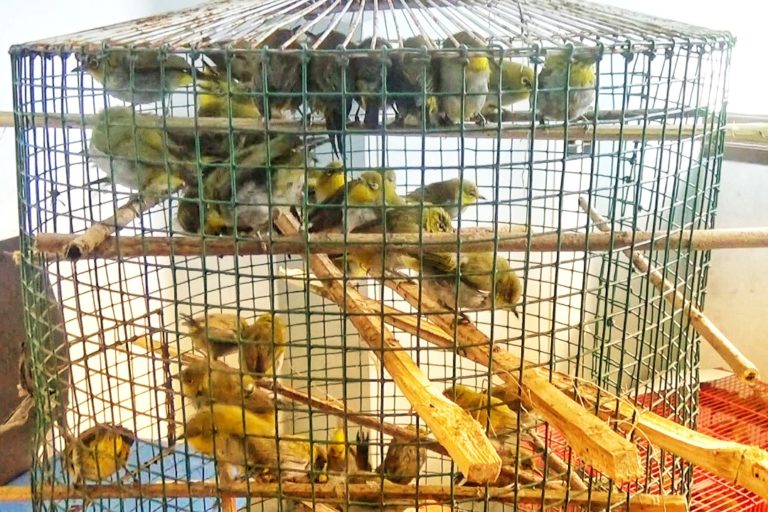 MEDAN, Indonesia — Smugglers managed to ship more than 7,000 birds, including wild-caught songbirds, by air from Sumatra to Java in Indonesia, highlighting the country’s weak enforcement against the deeply entrenched bird trade.

Indonesian authorities said the birds were transported in several batches on flights on June 11 and 12 from Medan in North Sumatra to Jakarta and Yogyakarta in Java.

Conservation authorities in the destination cities were notified about the smuggling attempt, but those in Jakarta were denied entry to the cargo facility at the city’s Halim Perdanakusuma Airport.

That allowed the recipient in Jakarta to collect the birds and get away. In Yogyakarta, officers managed to seize only some of the birds, as the recipient there had already picked up the rest.

Authorities suspect the sender behind the illegal shipments is a licensed North Sumatra bird trader identified only by the initials S.U. According to the wildlife trade watchdog FLIGHT Protecting Indonesia’s Birds, S.U. has a permit to breed birds in captivity from North Sumatra authorities but is widely believed to deal in wild-caught birds.

The bird shipments had the necessary quarantine certificates from authorities at Medan’s Kualanamu Airport, but not the Domestic Plant and Wildlife Transport Letter (SAT-DN) required from the North Sumatra Conservation Agency (BBKSDA).

Marison Guciano, the executive director of FLIGHT, said it was no secret among wildlife traders throughout Sumatra that export controls were lax at Kualanamu.

“So you’ve got birds being sent to Medan from Pekanbaru [in neighboring Riau province], flown out through Kualanamu and smuggled to Java,” he said. “How is this possible? Because they can see how easy it is to send birds through Kualanamu.”

Marison said it was likely that some officials at both the airport and the BBKSDA were helping the smugglers, and called for them to be questioned.

On June 15, three days after the successful smuggling attempts, conservation authorities managed to raid the cargo facility at Kualanamu, where they seized 2,300 birds. The birds were believed to have been caught from the wild and were destined for Java.

They included 1,700 bar-winged prinias (Prinia familiaris) and 600 great tits (Parus major) crammed into cages; 516 of the prinias were found dead because of the cramped conditions, along with 300 of the tits.

The BBKSDA said in a statement that it released the rest of the birds at a nature park in North Sumatra’s Deli Serdang district.

The seizure means smugglers trafficked or attempted to traffic nearly 10,000 birds in the space of just four days. But that figure is just the tip of the iceberg, according to Marison. An investigation by FLIGHT, in which the group traced the movements of illegal bird traders, indicates they can smuggle 40,000 birds a month from Kualanamu to Java.

Marison said the sheer volume makes it almost certain that the birds are caught from the wild rather than hatched and raised in captivity. “If thousands of birds are delivered in three or four days, it’s clear that they aren’t from breeding centers, but from nature. Birds need time to reproduce,” he said.

Previous studies on the bird trade have exposed the thriving market for birds in cities across Java and Sumatra. A 2005 report estimated that, on average, more than 614,000 songbirds a year are trapped and traded throughout the two islands.

The top destination by far is Java, where keeping songbirds as pets is a popular hobby. It’s a status symbol in Javanese culture and thought to promote peace of mind. Songbirds are also prized for use in contests, which have spawned thriving networks of clubs, online forums and blogs. The country’s president, Joko Widodo, is himself an avid collector of songbirds, which he enters into singing contests. In 2018, he even offered to buy a prize-winning bird worth up to $137,000.

The hobby has also spread beyond Java due to the government’s transmigration program that relocated residents from the densely populated island to other parts of the country. That has allowed bird-keeping, among other Javanese customs, to thrive in those regions.

According to FLIGHT, there are at least four top bird traders in North Sumatra, two of whom hold captive-breeding permits. Marison said a common ploy was for traders without permits to “launder” their birds through these permit holders for a commission. “This has happened often and for so long,” he said.

The capture of wild birds, whether a protected species or not, is regulated through a government permit-and-quota system that is supposed to consider recommendations from the Indonesian Institute of Sciences (LIPI), a state-funded think tank.

Indonesia is home to the largest number of threatened bird species in Asia, according to TRAFFIC, a wildlife trade monitoring group. Collectors tend to prefer wild-caught birds which they believe are better singers than captive-bred ones. The premium they’re willing to pay gives traders plenty of incentive to stock wild-caught birds rather than go to the trouble of breeding them in captivity.

Marison called on conservation authorities to beef up monitoring of bird breeders and be stricter about enforcing the law against notorious traders like S.U. Anyone convicted of illegally catching a protected species faces up to five years in prison and 100 million rupiah ($7,900) in fines. Those who illegally catch non-protected birds face only the prospect of having the birds seized and a token administrative sanction (if they run a breeding facility).