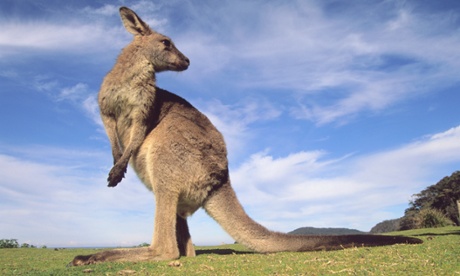 The lives of nearly 1,500 kangaroos that roam the open spaces of Canberra have been spared after a tribunal sided with animal rights campaigners to halt a planned mass cull of the marsupials. The ACT civil and administrative tribunal ruling on Wednesday night provides a temporary reprieve for the eastern grey kangaroo population, pending a full review of the decision to issue licences for the cull, which will take place in July.

The spiralling number of kangaroos in the ACT has placed them on the hit list, with the territory’s government claiming that they damage ecosystems, endangering other native animals.

If the review allows the ACT government to carry out its annual cull, which it has undertaken since 2009, it will only have a few weeks to shoot the 1,455 kangaroos. A culling ‘window’, aimed to minimise deaths to young joeys, closes on 31 July.

Jess Ferry, spokesperson for Animal Liberation ACT, which initiated the case alongside Victoria-based Australian Society for Kangaroos, told Guardian Australia she was “very happy and relieved” at the tribunal verdict.

“We don’t want killing to go ahead and we will show evidence that shows it doesn’t need to go ahead,” she said. “We will do our best to stop them and show that the government’s evidence is unsound.

“Kangaroos have existed in Australia for 2m years, so they are pretty good at regulating themselves in the ecosystem. We believe every animal has a right to exist.

“Killing hundreds of sentient beings each year can’t be good for ecosystem. We need the government to prove that what it is doing is scientific.”

Ferry said that government guidelines on how to effectively kill kangaroos, which stipulate a gunshot to the head of adults and the decapitation of joeys, left 407 young joeys dead last year, some with multiple injuries.

“They die in a horrific way,” she said. “They are hit over the head with a blunt instrument and suffer hideous deaths. We’d also point out there is no safe time to kill animals and not impact young kangaroos.”

But Daniel Iglesias, director of ACT parks and conservation, told Guardian Australia that the scientific case for the cull was sound.

“These kangaroos are living in altered environment where thylacine [Tasmanian tigers] and dingos are not there anymore, so they are not naturally controlled by any predator,” he said.

“When you combine that with the suitable habitat that humans have created, you end up with too many plant-eating animals. You have a chain reaction where you lose insects, small mammals and small birds. We don’t want the whole ecosystem to be run down to the point of no return.

“To call it cruel and inhumane is at odds with what the RSPCA says. We have professional marksmen and a code of practice that we strictly follow. We aren’t looking to eradicate them.

“It’s going to be problematic for us to get the entirety of the cull done on time. But I’m optimistic we’ll still get some done.”