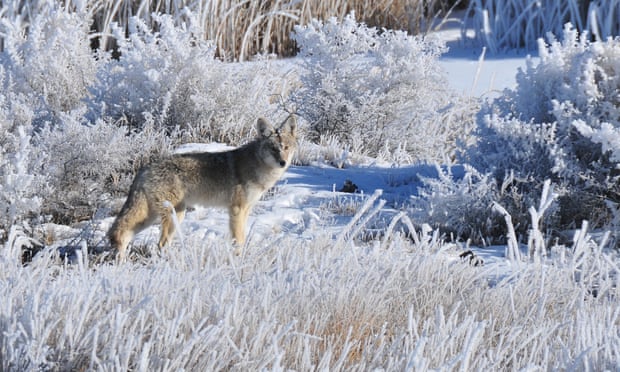 The Trump administration has reauthorized government officials to use controversial poison devices – dubbed “cyanide bombs” by critics – to kill coyotes, foxes and other animals across the US.

The spring-loaded traps, called M-44s, are filled with sodium cyanide and are most frequently deployed by Wildlife Services, a federal agency in the US Department of Agriculture that kills vast numbers of wild animals each year, primarily for the benefit of private farmers and ranchers.

In 2018, Wildlife Services reported that its agents had dispatched more than 1.5 million native animals, from beavers to black bears, wolves, ducks and owls. Roughly 6,500 of them were killed by M-44s.

On Tuesday, after completing the first phase of a routine review, the US Environmental Protection Agency announced that it would allow sodium cyanide’s continued use in M-44s across the country on an interim basis.

Yet the traps are facing increasing opposition, and have, in the past, led to the inadvertent deaths of endangered species and domestic pets and caused harm to humans.

In 2017, a teenage boy named Canyon Mansfield was hiking with his dog in the woods behind his family’s home in Pocatello, Idaho when Mansfield’s dog triggered a cyanide trap that sprayed a plume of poison dust into the air. The dog died on the spot and Mansfield was rushed to the hospital, where he ultimately recovered. His parents are suing Wildlife Services over the poisoning.

Mansfield’s case made national headlines and has fueled opposition to M-44s. In May, in response to advocacy by environmental groups, Oregon’s governor Kate Brown signed a ban on the use of the traps in the state.

In 2017, Wildlife Services agreed to temporarily halt the use of M-44s in Colorado after environmental groups sued. The agency also stopped using them in Idaho after the Mansfield case came to light.

In the months before the EPA announced the reauthorization, conservation groups and members of the public flooded the agency with comments calling for a complete national ban on the predator-killing poison.

According to an analysis provided by the Center for Biological Diversity, which is a leading opponent of M-44s, 99.9% of all comments received by the EPA opposed the reauthorization of sodium cyanide for predator control purposes.

Although the agency took a different view, it did impose new restrictions on the use of M-44s. Among other things, the agency will now prohibit government officials from placing M-44s within 100 feet of public roads or trails. The agency’s reauthorization decision is only an interim one and a final decision on the matter is expected to come down after 2021.

Brooks Fahy, the executive director of the environmental group Predator Defense and a leading opponent of M-44s, denounced the EPA’s decision.

It is a “complete disaster”, he said. “[The EPA] ignored the facts and they ignored cases that, without a doubt, demonstrate that there is no way M-44s can be used safely.”

In response to the Guardian’s request for comment, the EPA referenced the documentation of the decision on its website.

This article was first published by The Guardian on 8 August 2019.

Maybe you can drop one in Trump Tower or at the white house.

ughhhh….the insanity is that of the American people who tolerate this shit from their supposed ‘leader’.

Monster. Poison kills everything, not just target animals, who keep the balance of all animals. Kill predators and vegetation suffers, among other things. It’s a viscous cycle of abuse to all of nature and life.

It’s been going on for years, the question is what can be done regardless of whichever administration is allowing it to continue. How do we get around this? Even the “accidental” kill count of non-target wildlife (and, of course, the occasional pet or child) is in the hundreds. I fear there is no sanity in our federal wildlife bureau – so where does that leave us? What is the next step?

Sara Leonard remove him impeach him!!

affirmative action by the people who do care

I think dump should take his own Kool aide.

Oh please don’t do that!

too bad million of people do not care enough to sing out our protests….

He is such a moron, everyday more bullshit from him!

This is disgusting and should be stopped permanently. To kill animals in this way is totally inhumane. Trust the Trump administration to want to carry on with this practise.

Let me cyanide bomb his ass

It is BULLSHIT. Poisoning is such a horrible death and why kill them at all.