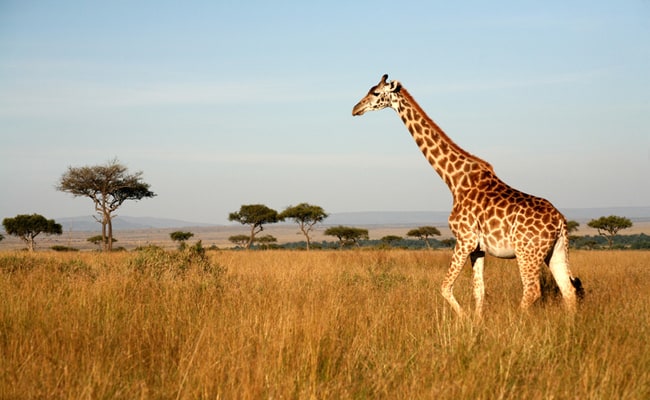 Conservationists have continued to sound the alarm over the face of giraffes who are quietly disappearing from the landscape and desperately need more protection, and now they’re headed to court to get it for them.

Since the mid-1980s, the population of giraffes has declined by a startling 40 percent, leaving just over an estimated 97,000 individuals in the wild.

Two years ago concerns about the threat of extinction they now face prompted the International Union for the Conservation of Nature (IUCN) to change their status from a species of Least Concern – skipping right over Near Threatened – to Vulnerable on the IUCN Red List of Threatened Species.

A recent investigation conducted by the Humane Society of the United States (HSUS) exposed how the trade in giraffe trophies and parts in the U.S. is contributing to their decline. According to the HSUS, on average, more than one giraffe is imported by a U.S. trophy hunter every single day, which is putting them at serious risk and making the U.S. a significant player that’s contributing to their decline.

While the threat of extinction is serious, the U.S. also has an opportunity to be part of the solution instead of part of the problem by protecting giraffes under the Endangered Species Act.

Last year a coalition of animal advocacy and conservation organizations joined forces to petition the Secretary of the Interior and the U.S. Fish and Wildlife Service to protect all four genetically distinct species of giraffe equally as endangered species.

Doing that would ban most imports of trophies and parts coming into the U.S., and regulate domestic trade, in addition to helping raise much-needed awareness about their plight. It would also generate funding for more research and in-situ conservation efforts to protect them in the wild.

Unfortunately, it’s been almost a year-and-a half and the Trump administration has yet to respond so now it’s facing a lawsuit. This week, the Center for Biological Diversity announced its intent to sue to get giraffes the protection they clearly need.

“As giraffe populations plummet, the Trump administration won’t even take the first step toward protecting these beautiful animals,” said Tanya Sanerib, international program legal director at the Center for Biological Diversity. “Africa now has fewer giraffes than elephants, but the administration refuses to throw these imperiled creatures a lifeline. That has to change, before it’s too late.”

You can help by signing and sharing the petition calling on the U.S. Fish and Wildlife Service to protect giraffes as endangered species under the Endangered Species Act.

What a sad world, living in the era of watching all species, along w/ the most enigmatic ones, facing inevitable extinction, one by one, on land & sea. And no present power on earth can prevent it as the onslaught grows more foreboding w/ each passing year, it’s happening that fast. It’s as if the human species has brought hell & damnation to the whole planet. With a growing human population, human-wildlife conflicts, disease, habitat loss & fragmentation, predators, civil unrest, drought, climate change, species being killed for their meat or Asian lust for body parts & trophy hunting by… Read more »

So blame the President…. how original

How can anyone allow the killing of harm less animals that belong in Africa not on Americans dinner tables. Next thing we’ll be eating Dog an Cats like the Chinese