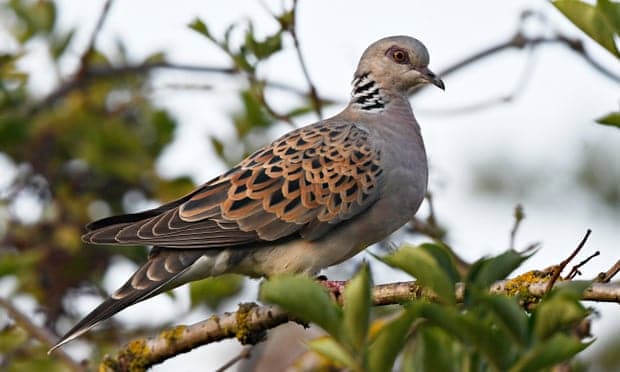 The turtle dove, Britain’s most endangered bird, continues to plummet towards extinction, its numbers having halved over five years, according to the latest data.

The turtle dove’s 51% decline from 2013 to 2017 is the most drastic of a continuing slump for a quarter of farmland bird species.

However, there are signs of recovery for some birds, which experts attribute to the success of wildlife-friendly agriculture funded by the government.

The reed bunting, corn bunting, goldfinch and stock dove all showed significant short-term increases, with populations boosted by agri-environment practices such as leaving some stubble fields unploughed over winter to provide food for birds.

The report, by the Department for Environment, Food and Rural Affairs (Defra), reveals the catastrophic long-term loss of farmland birds. It reports that 62% of 19 monitored species have declined between 1970 and 2018.

David Noble, the principal ecologist at the British Trust for Ornithology (BTO), said: “We know some agri-environment schemes have had positive effects on some bird populations. It doesn’t necessarily mean they’ve been turned around but it’s significantly less negative than it might have been. It’s working to some extent.”

Farmland birds declined overall by 6% over five years but the figures are skewed by drastic disappearances such as that of the turtle dove, of which there are barely 1,000 breeding pairs left in the UK, a 98% decline since 1970.

Noble said: “This is a species in freefall for a lot of different reasons because of what’s happening here [with habitat loss], because they are migrants, because they are hunted [in the Mediterranean], because things are happening on their wintering grounds in Africa – a combination of everything. It’s a big issue.”

According to Noble this data and other studies showed the success of targeted conservation and agri-environment schemes – provided by EU funds, with the scale and shape of post – Brexit farm support still uncertain. But this work needed to be expanded.

“It is small gains, small improvements,” he said. “It has to be scaled up. It has to be enough to mitigate against the other problems that are happening, such as to migrant birds further south.”

While the turtle dove and grey partridge continue to decline despite targeted conservation work, other schemes to revitalise farmland species are bearing fruit, with populations of skylarks (up 6%), corn buntings (up 12%), reed buntings (up 16%) and linnets (up 9%) all enjoying short-term increases.

Previously rapidly declining birds such as tree sparrows, starlings and lapwings, were now thought stable. The continued decline of the greenfinch (down 46%) was because it had been hit by disease. 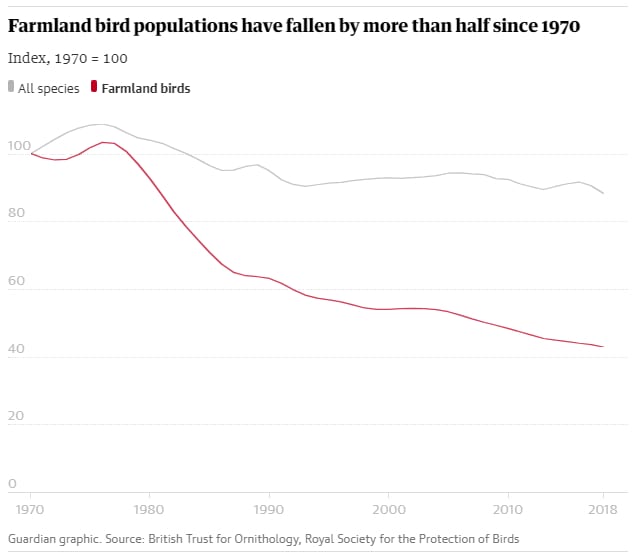 While farmland covers three-quarters of the UK, birds living in woodland (13% of land area) are dipping again, according to the data, which covers 130 species of breeding birds.

Populations of 37 predominantly woodland species stabilised after the mid-1990s, but woodland birds declined by 8% over about five years to 2017. Particularly marked recent declines include the lesser spotted woodpecker (down 37%), nightingale (down 38%) and common crossbill (down 49%).

There was better news for the goldcrest, pied flycatcher and chiffchaff, which increased by 14%, 10% and 9% respectively. The song thrush has bounced back by 22% in the five-year period after a precipitous long-term decline.

Some declines are more marked in certain regions, with the willow warbler’s reduction in southern Britain attributed to drier conditions caused by global heating, as well as deer browsing on woodland scrub – a problem also afflicting the nightingale, which requires dense thickets to nest successfully. The willow warbler is faring much better in Scotland.

Seabirds have experienced mixed fortunes, with 46% increasing over the short term. While herring gulls and arctic skuas continue to experience short-term and long-term declines, razorbills and great black-backed gulls have bounced back. 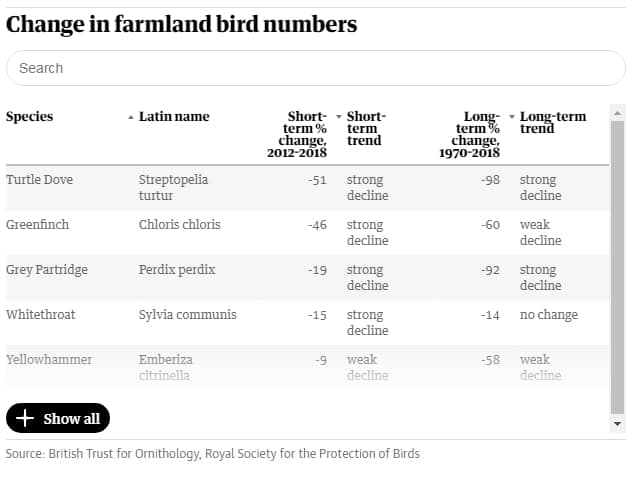 This article was first published by The Guardian on 7 November 2019.