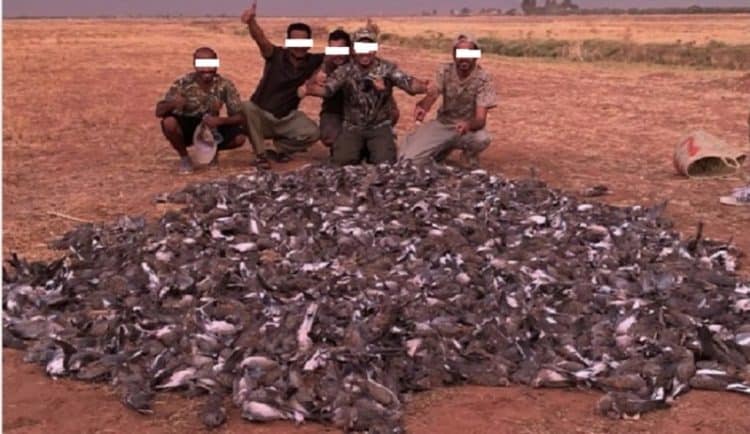 A massacre of nearly 1500 Turtle Doves in one day by foreign tourist hunters in the Marrakech region sparked great outrage in Morocco. The total exceeded by three times the hunting quota set by the law according to an official inquiry.

A hunting party organized in the region of Marrakech has turned into a real slaughter. The hunting was organized by a Moroccan company (licensed hunt operator) for tourist hunters from the Gulf countries.

A total of 1490 Turtle Doves (Streptopelia turtur) were slaughtered in one day (and that’s just for one single day, documented in the video below).

This has aroused much indignation among the Moroccans (both hunters and the general public). The photos and videos documenting the hunting party were widely shared on social networks since mid-August.

In this video, we can hear one hunter saying: “This morning’s round;… May God give you wellness!….This is the total: 1490 [Turtle Doves]”. “God bless you, God bless you,…”, we can hear the others saying in the middle of the speech.

The Moroccan hunting law specifically dictate where and when to hunt, and this varies depending on the ‘category’ of hunters. The Moroccan and foreign resident hunters have slightly different rules than the tourist hunters.

Specifically, the tourists can hunt from Friday until Monday (4 days) but only on ‘land leased to the tourist hunting associations or companies (= hunt operators or organizers)’. The Moroccans and foreign residents can hunt on public lands but only on Saturday and Sunday and during national holidays.

For every hunter, the hunting quota is the same: 50 Turtle Doves per hunter per day (see the annual hunting decree for this season, in Arabic language).

How do we know the hunters exceeded the hunting quota?

They say, “an image is worth a thousand words”, but sometimes it fails to convey the whole truth. That is, taking photos with hundreds of Turtle Doves is not illegal in itself.

For example, two years ago a popular Moroccan singer shared a photo of himself with over 130 hunted Turtle Doves (i.e. more than twice the legal quota).

After the photo generated a storm among the Moroccan public, the singer issued a press release saying essentially that he respects the law and that these birds were actually shot by several hunters (himself and his friends/entourage).

In the absence of an official inquiry, most of us believed him. So, a photo (or a video) is unfortunately not a legal proof.

To use this ‘ambiguity’, the hunters from the Gulf issued a statement saying that the total (1490 Turtle Doves) was shot by over 30 hunters (which means, they totally respected the rules).

However, the damage was already done, because by that time the Forestry Department has already started the inquiry to find out what happened exactly.

Turtle Dove slaughter in Marrakech region by foreign hunters. Those same hunters appeared in the video and other photos not shown here.

According to media reports, the investigation conducted by the Department of Forestry exposed the responsibility of the company that supervised the hunt. The Department suspended the license of the hunt operator which is currently being prosecuted.

The inquiry confirmed the veracity of the photos and videos that circulated in the social networks. They also found that the hunters overshoot the regulatory hunting quota by three times. The commission of inquiry also noted a number of shortcomings related to the non-respect of the lease contract which obliges the contracting hunting company to supervise the hunting activity and to assume full responsibility for the acts committed by its clients

According to several media reports published recently, the Department of Forestry also disciplined a number of its own high officials. In this regard, the regional director of the Forestry Administration in Marrakech has been dismissed. The same sanction has been taken against the head of the “unit for surveillance and control of wildlife”.

This article was first published by Maghreb Ornitho on 4 September 2019.