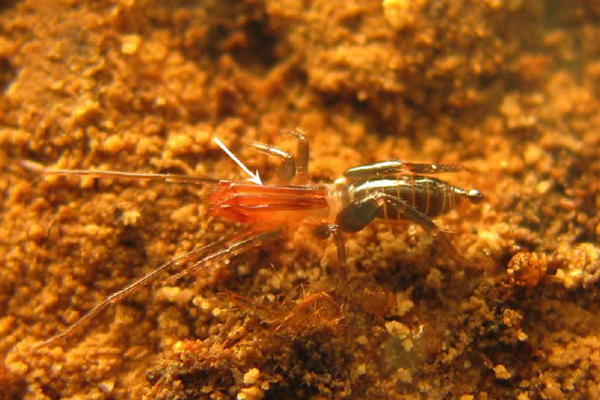 Scientists have discovered two new species of short-tailed whipscorpions (in the order Schizomida) in limestone caves in Brazil, according to a new paper published in PLoS ONE. The new species—dubbed Rowlandius ubajara and Rowlandius potiguara—add new knowledge to a group of arachnids that is little known in South America outside of the Amazon.

“Schizomids occur mostly in poorly sampled habitats, like the soil leaf litter, termite and ant nests, and caves,” the researchers write, noting that these habitats are under-explored in South America. “Subterranean habitats in particular can harbor large schizomid populations, and are a promising source of undescribed species.”

Species in the Schizomida order are generally quite small (under one centimeter) and are identified by their short tails, known to scientists as flagellum. Males of each species posses distinct tails, which the females grip during mating.

While both the new species were discovered in limestone caves, the scientists believe they may survive outside caves as well. Even the absence of eye-spots—found in both the new species—does not mean they are cave dependent, since many short-tailed whipscorpions lack eye-spots. More research, however, is needed before their full distribution can be determined.