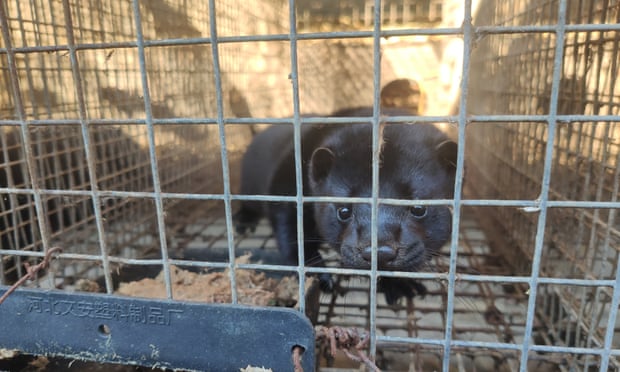 Campaigners are urging the UK government to ban fur imports after an investigation appeared to show widespread animal abuse and disregard for Covid-19 health protocols at more than a dozen fur farms in China.

Videos and photos from 19 farms visited in northern and north-eastern China last November and December appear to show foxes and raccoon dogs packed tightly in unsanitary cages and animals being electrocuted in ways that prolong their pain before death, often in front of others awaiting the same fate.

Investigators from Humane Society International (HSI) also documented farms selling carcasses to restaurants in violation of China’s rules forbidding the consumption of meat from wildlife. Those bans were put into place last year due to suspicions that the coronavirus pandemic emerged from the wildlife trade in the city of Wuhan.

Pelts being stretched on a Chinese farm where raccoon dogs and foxes are bred for their fur
The breeding operations investigated appeared to flout basic biosecurity protocols related to preventing Covid from spreading from animals to humans and vice versa, with none of the required disinfection stations and no checks or safety procedures for visitors entering and exiting the farms.

China is on its way to becoming the top mink producer in the world after Denmark’s recent suspension of production following Covid-19 outbreaks and potential mutations emanating from its mink population, resulting in a cull of more than 15 million of the animals in the country.

Since April 2020, Covid outbreaks have occurred at more than 400 mink farms across Europe, with other outbreaks on farms in North America. China’s authorities have reported no outbreaks on mink farms.

“Our investigators witnessed an almost total lack of disease control and health protection measures on fur farms, which is extremely worrying considering that mink, raccoon dogs and foxes are all capable of contracting coronaviruses,” said HSI executive director Claire Bass.

China raised more than 14 million foxes, 13.5 million raccoon dogs, and 11.6 million mink in 2019 to provide fur for export, according to HSI. Photograph: Do Not Credit/Handout
Most disturbing was the use of an electrocution device meant to dispatch animals quickly – if used properly – by delivering a shock directly to the brain. Instead, video footage captured by HSI appeared to show animals being repeatedly and randomly stabbed with the double-pronged lance, paralysing but not killing them outright.

“The animals in this video are being subjected to violent and chaotic electrocution in the body and not the brain, which means they are highly likely to have experienced several minutes of extreme physical pain and suffering, like heart attack symptoms,” said HSI veterinary adviser Prof Alastair MacMillan.

China bred more than 14 million foxes, 13.5 million raccoon dogs, and 11.6 million mink in 2019 to provide fur for export, according to HSI.

Both HSI and British animal welfare charity the RSPCA want the UK to ban imports, after the country halted fur farming on cruelty grounds two decades ago. The UK imported more than £55m worth of fur in 2019, including £5.3m from China, according to HM Revenue and Customs data.

It is difficult to tell whether fur from animals at these particular farms is being sold directly to the UK, Wendy Higgins, director of international media for HSI, told the Guardian, as there is little transparency or traceability in the industry.

“We’ve asked the farmers many times and they never know,” she said. “Their fur gets sent to local fur markets, where it is bought by wholesalers and distributors, or sent to big fur auction houses where it will be bought by Chinese fashion companies that manufacture and ship overseas.”

In response to questions from the Guardian a spokesperson from the British Fur Trade Association said that HSI and other groups calling for the ban had failed to provide evidence that the farms featured in their investigations provided fur that ended up in the UK.

“There is no evidence or proof linking these farms to fur entering the UK supply chain,” the spokesperson said, citing a previous case where the association referred the Daily Mirror to the UK press regulator for reporting on similar investigations by the HSI without stating that no direct links had been established. It was held that the Mirror’s article had wrongly suggested that the farm supplied fur to British shops, and that there was no evidence to suggest that this was the case.

The association said a ban would have no impact on animal welfare, cost thousands of jobs, and push the trade underground into untaxed and unregulated illicit channels.

This article was first published by The Guardian on 17 March 2021. Lead Image: A mink bred for its fur: China is on its way to becoming the world’s biggest mink producer.