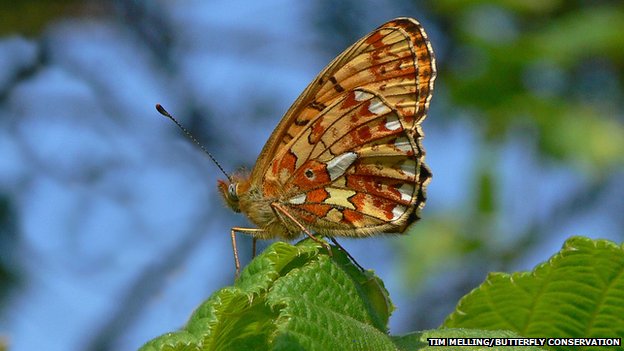 The UK’s spring butterflies are being welcomed by enthusiasts, but weeks later than they usually arrive. The second-coldest March on record contributed to the delayed emergence of many rare species, according to the charity Butterfly Conservation.

“First sightings” recorded by the public showed the insects typically appeared a fortnight later than normal. One rare species – the grizzled skipper – emerged a month later than last year.

The pearl-bordered fritillary was another rare butterfly to make a late show. Last year the insects were first spotted on 1 April but were not recorded until 27 April this year.

Threatened wood whites could be seen by 10 April last year, but this year were delayed until early May.

And the Duke of Burgundy butterfly made an appearance in late April this spring, around three weeks later than last year.

Last spring saw butterflies emerging earlier than normal following an unusually mild February and March. But the extreme wet weather that followed resulted in a terrible year for most species.

Butterflies emerging late from their chrysalises is not necessarily a problem for the insects, but the weather over the next few weeks may be crucial to their success.

Wet weather prevents butterflies from flying, which they need to do to find mates and plants on which to lay their eggs, explained Butterfly Conservation surveys manager Richard Fox

“If those [weather] conditions carry on for the duration of your life as a butterfly – which might only be a week at best – then you leave no offspring.”

And this year, butterflies appear to be in “very low numbers” following last year’s poor weather.

“They really need some fine spring weather and a successful breeding season in order to start rebuilding their populations,” said Mr Fox.

He added that generally the UK’s butterflies have suffered decades of decline, largely due to human destruction of their natural habitats.

“Nowadays these butterflies are so endangered… that a few years of bad weather might well drive colonies to extinction. And that’s obviously exactly what we want to try and avoid.”

Butterfly Conservation revealed its findings, gathered from public sightings of butterflies around the UK, ahead of Save Our Butterflies week which aims to introduce people to rare and threatened spring butterflies through a series of events and butterfly walks.

Mr Fox commented: “People tend to think of butterflies as at the height of summer and indeed that is when you tend to see most butterflies in your garden.

“But actually we have quite a lot of species, including some of our rare and threatened ones, which only come out at this time of year.”

This article was written and published by BBC Nature News