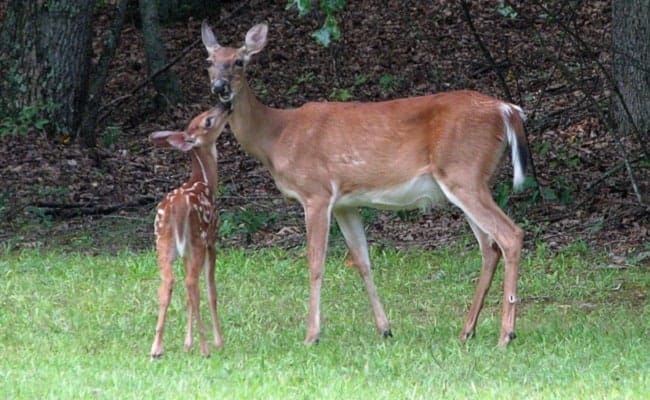 Very early one morning earlier this month, in the affluent town of Tiburon in Northern California, a doe and her young fawn grazed on some newly planted landscaping in the yard of resident Mark Dickinson.

The two deer had been there before. To protect his new plantings, did Dickinson install a fence or try using any other deer repellents? No. Did he make some noise to scare them away? Nope.

Dickinson grabbed a high-powered pellet gun equipped with a scope, laser beam and flashlight attachments. He aimed it at the mama and her baby, and shot them both in their sides.

Dickinson, who claimed he was only trying to scare off the deer, was arrested on suspicion of felony animal cruelty. In California, anyone who “maliciously and intentionally maims, mutilates, tortures, or wounds a living animal, or maliciously and intentionally kills an animal” can be charged with a felony. This charge could mean jail time and a fine of up to $20,000 per deer.

Additional misdemeanor charges, such as hunting deer out of season, hunting a fawn and not obtaining a hunting license could also apply in this case.

Dickinson is out on bail while the case is being investigated by the Tiburon Police Department, Marin Humane Society and the Marin County District Attorney’s Office. He was supposed to be arraigned Sept. 20 but it has been delayed, according to The Ark newspaper’s Facebook page.

“He had no intent to be cruel or to harm the deer,” his attorney, Charles Dresow, insisted to the Marin Independent Journal. “Rather, he was simply trying to scare them away from consuming new landscaping.”

Really? There are better ways to scare away deer than by shooting them with a high-powered pellet gun. When neighbors heard about the killings, they were understandably upset. The doe and her fawn had been a welcome and familiar sight in the neighborhood for weeks.

“This is outrageous,” Tiburon resident Linda Meinberg told KGO. “To scare deer away, all you have to do is look at them. You don’t need to shoot them.”

When officers from the Marin Humane Society arrived at Dickinson’s residence, the doe was already dead. The fawn died about an hour later.

“We were pretty shocked and disturbed,” Lisa Bloch of the Marin Humane Society told KPIX 5. “To kill two innocent animals like this and make them suffer is really egregious and we’re pretty concerned.”

On its Facebook page, the Marin Humane Society wrote, “This tragic incident serves as a reminder that we promote the respect of wild animals through peaceful coexistence. There are many ways to protect your yard from deer, whether it’s by building appropriate fencing or planting deer-resistant shrubs, trees and plants.”

Dickinson could have dealt with the doe and fawn in any of these much more humane ways. Please sign and share this petition urging the Marin County District Attorney’s Office to charge him with felony animal cruelty.