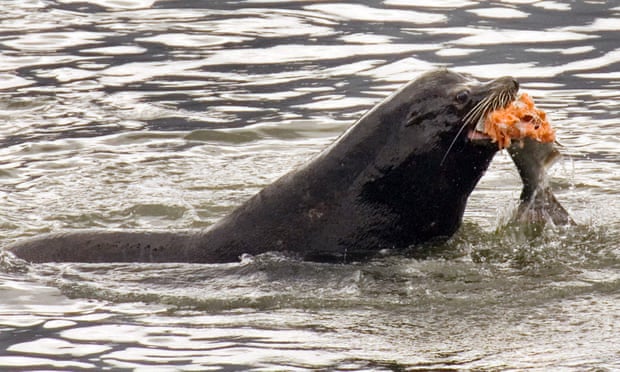 US authorities have given wildlife managers in Washington, Oregon and Idaho permission to start killing hundreds of sea lions in the Columbia River basin in hopes of helping struggling salmon and steelhead trout.

The marine mammals long ago figured out that they could feast on the migrating fish where they bottleneck at dams or where they head up tributaries to spawn.

“These are places where the fish are really vulnerable,” said Shaun Clements, senior policy analyst for the Oregon department of fish and wildlife. “We have to manage this so the fish can get through to spawn.”

The new permit allows the states and several Native American tribes to kill 540 California sea lions and 176 Steller sea lions over the next five years along a 180-mile (290km) stretch of the Columbia, from Portland to the McNary Dam upriver, as well as in several tributaries. It’s the first time they have been allowed to kill the much larger Steller sea lions.

The sea lions, whose populations generally are healthy, have posed a long-running conundrum for wildlife officials, pitting mammals protected under federal law against protected – and valuable – fish runs. Complicating matters is that Columbia River salmon are a key food source for the Pacific north-west’s endangered population of orcas, which scientists say are at risk of extinction if they don’t get more sustenance.

Over the last few decades, authorities have tried all kinds of less-lethal methods to deter the sea lions, including traps, rubber bullets and explosives, to no avail. The animals would return days after being relocated hundreds of miles away.

The Port of Astoria in Oregon even tried a fake motorized orca made of fiberglass in a futile effort to keep them off its docks.

Authorities began killing some California sea lions at the Bonneville Dam on the Columbia River about 13 years ago, under restrictions that required them to first document each targeted animal in the area five times, observe it eating salmon and wait for it to enter a trap. About 238 have been killed there.

Under changes to the Marine Mammal Protection Act two years ago, authorities will no longer face such restrictions. They will be able to tranquilize, capture or trap any sea lions in the area, then bring them to another location to give them a lethal injection. The permit forbids them from shooting sea lions.

Last year, Oregon officials killed 33 sea lions that were devouring steelhead on the Willamette River. Scientists estimated that the animals ate about one-quarter of the returning fish there, and they say runs have started to rebound since.

Sharon Young, senior strategist for marine wildlife at the Humane Society, called the sea lions the least of the salmon’s problems. Fishing, competition from hatchery fish and habitat loss, including dams and culverts that block their passage or raise water temperatures, are far more serious, she said.

“Killing the sea lions isn’t going to address any of that,” she said. “It is only going to distract from what they aren’t doing to address the real problems salmon are facing. You’re killing sea lions for nothing.”

Young served on a federal taskforce that reviewed the permit request that the states and tribes filed last year. Members voted 16-2 to approve the permit following a three-day hearing in May, and the National Oceanic and Atmospheric Administration’s regional administrator, Barry Thom, signed off Friday.

Clements of the Oregon department of fish and wildlife said reducing the number of sea lions is one of many efforts to help the salmon, including billions of dollars spent on restoring habitat.

“They need all the help they can get,” he said.

This article was first published by The Guardian on 15 August 2020. Lead Image: A sea lion eats a salmon in the Columbia River near the Bonneville Dam in North Bonneville, Washington. Photograph: Don Ryan/AP.