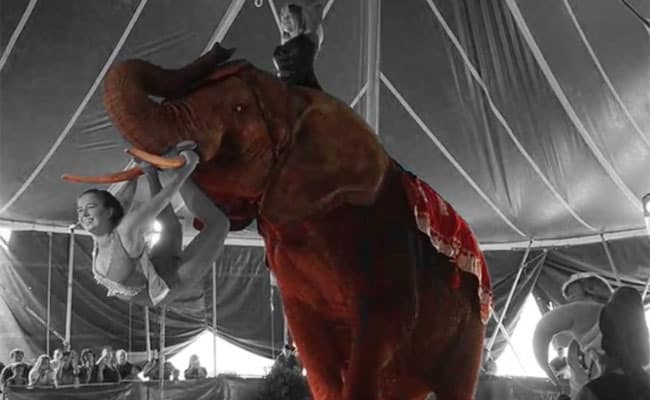 Animal advocates are celebrating an epic win with the passage of Nosey’s Law in New Jersey, which makes it the first state in the U.S. to ban all wild animals in traveling circuses.

The law was appropriately named after Nosey, an elephant who had suffered decades of abuse at the hands of her owner, Hugo Liebel.

She was taken from the wild in Zimbabwe when she was just two-years-old, before being brought to the states in the early 1980s.

In 1988 Liebel bought her, and ever since she’s either been used as a performer under the names Nosey, Tiny, Peanut and Dumbo in circuses, or rented out when she wasn’t being used in shows.

Over the years, people have continued to raise concerns about her well being, while Liebel racked up a nauseating list of hundreds of violations of the Animal Welfare Act.

In addition to being forced to perform demeaning tricks and give rides, which put the public at risk, she’s been beaten, chained so tightly she couldn’t move, confined to a trailer, starved and denied veterinary care for chronic health problems, among many other problems.

When Senator Raymond Lesniak introduced Nosey’s Law, he wrote, “Nosey is an elephant who is virtually crippled by arthritis, and who is forced to travel the country to give rides at fairs, flea markets and other events. The arthritis has likely caused Nosey unnecessary suffering and permanent disability, and reports indicate that Nosey has been denied necessary veterinary care. Despite this, the U.S. Department of Agriculture has failed to take action to protect Nosey, and Nosey’s owners continue to use her in shows. This bill would prohibit such shows in New Jersey.”

The bill was initially intended to ban elephant acts, but was later expanded by Assembly sponsor Raj Mukherji to include other wild and exotic animals used in traveling shows. Now, its supporters are celebrating an epic victory with its passage.

Both Illinois and New York have recently banned elephant acts, but New Jersey is the first to go farther by banning all wild animal acts, and hopefully more states will soon follow its groundbreaking lead.

As for Nosey, her abuse has finally come to an end. This past November animal control officers successfully filed a petition to seize her after finding her tightly chained, standing in her own waste, and without proper shelter, food or water.

She was taken to The Elephant Sanctuary in Tennessee, where for the past few weeks she has been able to experience freedom for the first time in her life – and she seems to be relishing it.

While her future has yet to be determined by the courts, her advocates are keeping the pressure on and hope to see her spend the rest of her life in a sanctuary, where she will get the care she needs.

You can help Nosey now by signing and sharing the petition calling on the U.S. Department of Agriculture not to renew Liebel’s exhibitors license.

You can also help other animals who are still being exploited for entertainment by signing and sharing the petition calling on Congress to ban their use in traveling circuses across the nation once and for all by passing the Traveling Exotic Animal and Public Safety Protection Act (TEAPSPA).