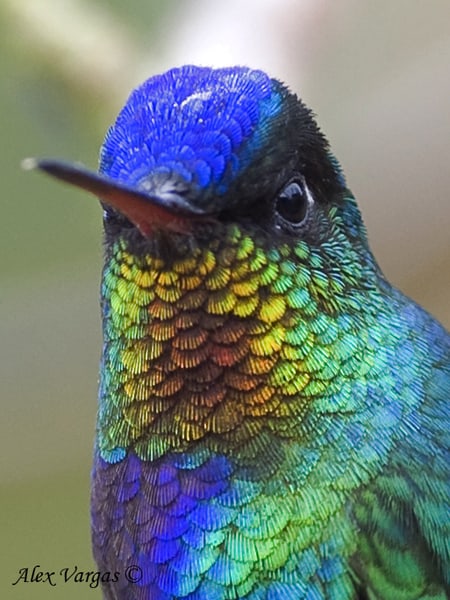 The gorget (pronouced “gor-git”) is a shimmering patch of feathers found on the throats of males in many hummingbird species.

The brilliant, shifting colours arise not from pigments in the feathers, but rather from their microscopic structure. Audubon explains:

The term comes from days of old, when a knight-in-armor wore a metallic collar – or gorget – to protect his throat.

The hummingbird’s intense glint is the result of iridescence, rather than colored pigments. The bird’s throat feathers contain minutely thin, film-like layers of “platelets,” set like tiles in a mosaic against a darker background.

Light waves reflect and refract off the mosaic, creating color in the manner of sun glinting off oily film on water.

And this isn’t the only feather-related trick the Anna’s hummingbird (Calypte anna) can pull off.

When mating season rolls around, male birds put on daring acrobatic displays to impress females, dive-bombing from great heights at speeds of over 20 metres per second, while their tail feathers produce unique high-frequency squeaks.

This article was first published by Earth Touch Network on 24 Jul 2015.

Wonderful article! THANK YOU so very much for this!