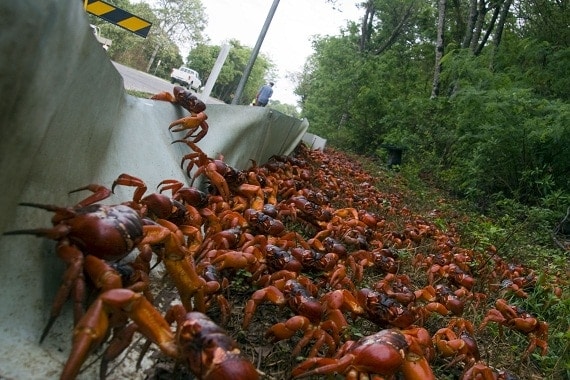 Australia’s Christmas Island—located south of Indonesia in the Indian Ocean—is named for the day of its discovery in 1643.

But, if you’re familiar with the incredible natural phenomenon that occurs there around this time of year, you may have thought the island was aptly named for the sea of red that blankets the island each year around Christmas time.

While that is not the case, we’re taking a close look that at this natural phenomenon that is underway on Christmas Island in honor of the Christmas season.

The beginning of the wet season on Christmas Island—typically falling between October and December—triggers red crabs to start their migration each year. During this time, tens of millions of red crabs migrate from the dense rain forest to the coast. The males typically begin the charge ahead of the females, reaching the coast within five to seven days. Once there, the males dig burrows in the sand for them and their partner to mate in privacy. After mating, the males start their migration back to the rainforest, while the females remain in the burrows for about 12 to 13 days as the eggs develop, according to Parks Australia.

Once again triggered by nature, the females exit their burrows and head to the water’s edge in tandem with the high tide during the last lunar quarter. There, they deposit their eggs into the sea, which hatch immediately. Waves and tides carry the young larvae out into the ocean, where they grow for about a month into young crabs and then return to shore. They then complete the cycle of migrations, marching for about nine days to reach the rain forest.

Because tens of millions of these crabs migrate at once, they can become a bit of a nuisance for locals, blocking roadways, bridges, and just about any surface as they descend to the shoreline. To protect these crabs, officials have enacted road closures during the migration and even built “crab crossing” bridges and throughways to protect the crabs, according to the Christmas Island Tourism Association.

Needless to say, this migration is an incredible sight to see! Take a look below to for a glimpse at these red crabs heading to the coast:

This article was first published by Oceana.org on 22 Dec 2014.

Very interesting must be a sight to see

How heartening to see the effort that goes into saving crustaceans with no economic value. This really amazed me. Thank you.

Yes Ken,seen the video of these red crabs before, amazing