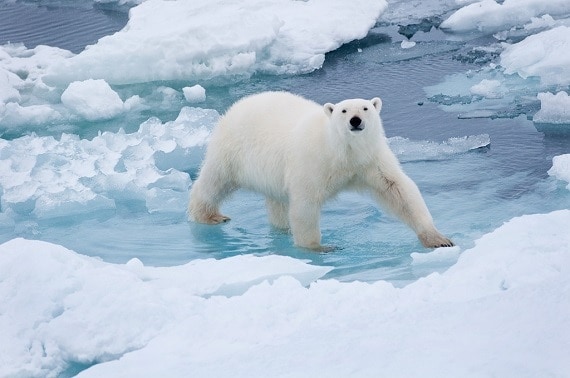 It looks like the famed Panda Cam at the National Zoo has a new rival. Recently-released footage of a polar bear in the Arctic is giving scientists and polar bear-enthusiasts alike a glimpse into the elusive lives of these endangered animals—and giving pandas at the National Zoo a run for their money.

The clip, released by the U.S. Geological Survey earlier this month, is the first “point of view” video of polar bears, and is part of a new study to better understand how polar bears are responding to sea ice loss from climate change. The footage spotlights one of four female polar bears that were harnessed with video camera collars north of Prudhoe Bay, Alaska, and captures her eating, swimming, and interacting with a potential mate.

By observing polar bears’ activity patterns exclusively from the animals’ perspective, scientists are better able to understand the personal lives of these species and how climate change is affecting their behaviors and the Arctic ecosystem as a whole.

The Arctic’s survival, and subsequently the polar bears’, is incredibly threatened by the pressures of climate change and industrialization. Oceana has offices in several nations bordering the Arctic, and is informing and working with local communities, stakeholders, and scientists to best this unique ecosystem. Oceana is focused on addressing all of the threats faced by the Arctic—climate change, industrial fishing, shipping, pollution, and oil and gas exploration and development—in order to implement genuine protection in the Arctic.

This article was written by Madeleine Simon for Oceana.org